Taiji vs. Muay Thai: The Fight I Put a Stop To 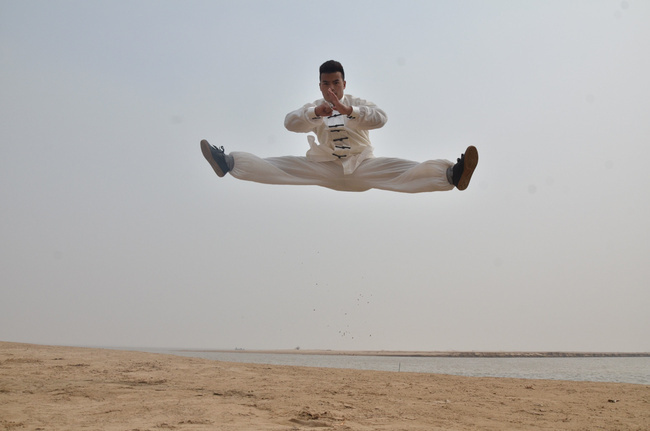 (Chen Xiang Lin Doing the splits beside the Yellow River)

Late last year, a young taiji disciple named Chen Jia invited me over to her school in Shanghai to help her look at some English-language documents. I sat down at her beautiful wooden tea table, sipped some pu’er, and took a look at the what she had. I choked on a bit of tea when I saw that the documents were descriptions of Thai Muay Thai fighters with two, three hundred fights apiece.

“We’re challenging these Thais to a match in the spring, I need to show these fighters to my master in Henan,” explained Chen Jia. “It’s going to be televised all over China.”

Oh no you’re not, I said, and then went into an hour-long exposition on how Taiji and Muay Thai should never meet in the ring. She seemed skeptical, so I harped on it for a while. When I left I was worried that her school would go through with it, so I kept messaging her for a while, until I heard that the fights had fell through.

I never forgot her look of supreme confidence though, when she announced that one of her masters, Chen Ziqiang, would be leading the Taiji contingent. I had met Chen Ziqiang in Henan March of 2012, on a trip to the birthplace of Chen style taiji, the oldest and most prestigious taiji lineage in China.

The Chen Family is led by renowned Chen Xiaowang, a taiji master and ambassador who spends 90% of his time traveling the planet, and a few weeks back in Henan every year to accept students and say hi to mom. Chen Ziqiang, Xiaowang’s youngest brother, struck me as a cocky man. He wore a tracksuit like the thugs in my hometown of Frankfurt back in the 1990s, and he smirked a lot. He also had the physique to back it up.

His name, Zi Qiang, means “strong self” or “self strengthen,” and it fits him. A Chinese patriot named “strong self” is just the type of guy to challenge a bunch of Thai fighters to a televised duel, despite having never fought in the ring. And taiji, for all of its soft moves in flowing white robes, is just the type of martial art that Chinese can claim as their own. 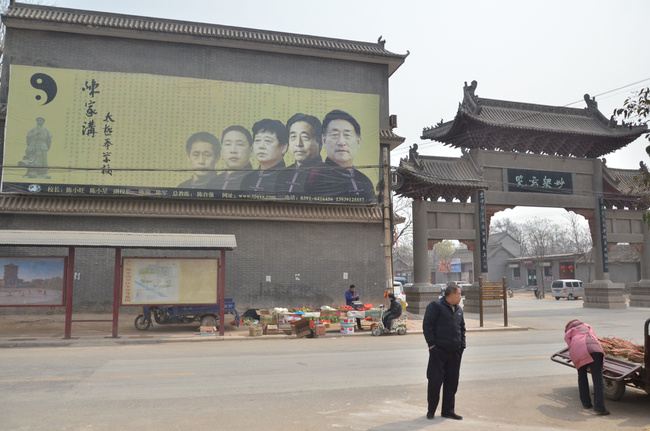 It’s pretty much accepted in the world of martial arts scholars that no Chinese martial arts lineage has an unbroken line of masters extending back millennia. Doesn’t stop them all from claiming they do though. Almost every surviving Chinese martial art today is busy rebranding itself as an ancient art, often with a near mystical founder who did everything but fly through the air.

The Shaolin myth rests on Boddhidarma, an Indian monk who taught Zen Buddhism and presumably the horse stance as well. Most schools in China who trace themselves back to Shaolin in any way have a banner of the Indian monk that they pull out for special ceremonies. It’s an uneasy situation for any Chinese to be in. Chinese pride themselves on being the oldest nation in the world, the inventor of everything before the 20th century, and the fount of all Asian civilization. It just isn’t easy for them to admit that kungfu, the ultimate “Chinese art” is actually an Indian import.

But I’ve seen them do it: Solemnly declare that kungfu came from India, and then immediately start talking about “Chinese kungfu,” referring to that which we call kungfu today. It doesn’t help that Buddhism is also an Indian import.

Taiji doesn’t have this problem. Taiji is not only, as far as we know, a Chinese martial art, but it’s also linked to Taoism, a Chinese religion. Every taiji practitioner in the world today believes that Taoist sages gave birth to taiji the martial art, as one way in which to gain immortality. The mystical Taoist/Taiji correspondent to Boddhidarma is Zhang Sanfeng, unknown to most Westerners, but considered to be the first Taoist sage to practice taiji.

But it’s likely that the two are linked in the Chinese consciousness more due to their “indisputable” Chinese-ness, not necessarily because Zhang Sanfeng was both a Taoist and a martial artist.

In fact, scholars believe that taiji and Taoism were married much later than most taiji practitioners would like to believe, in the 19th and 20th centuries perhaps, as China went through ideological and social upheaval. For patriots and conservatives, linking the two together provided a cultural anchor as invasions and liberations tore the nation apart.

In the last three decades, the means have differed, but the end remains the same. Taoism and taiji are still inextricably linked, but mostly due to branding and commercial reasons. Qingcheng Mountain is one of the many locations in China that boasts an ancient Taoist heritage, it is only very recently that the mountain’s “ancient taiji lineage” was re-discovered and packaged up for sale by an enterprising martial artist/businessman named Liu Suibin. 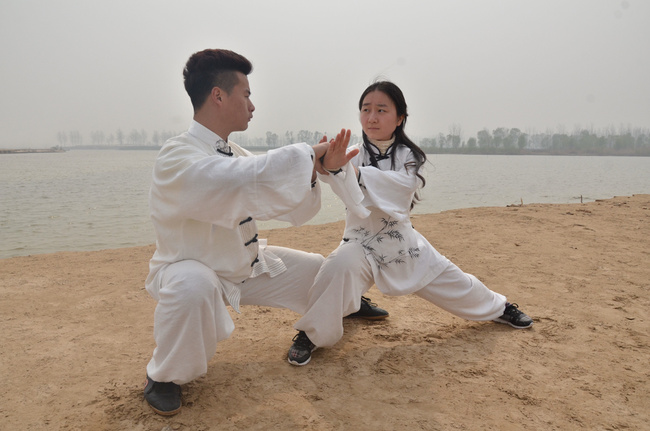 Chen Jia believes deeply in her master, and the power of taiji. She was confused when I told her about the differences between the ring and the yin yang circle where the taiji guys did their fighting, but relatively unconcerned. Taiji is much more powerful than an armlock, in their eyes, because a taiji master can harness the power of his internal qi, or energy, to amplify punches and kicks. His stance is incredibly solid. Her movements like water.

Taiji is more than just a martial art, or a good way to keep healthy, or the physical manifestation of Taoist thought; it is all three wrapped up in a giant red Chinese flag. And for a brief moment there, I thought a misguided patriot was going to take up the flag and charge a bunch of hatchet faced Thai boxers, like those other Boxers who charged the Allied Nations’ armies at the turn of the 20th century, with halberds and knives and amulets that kept the bullets away.

I’m glad the fight didn’t go down - especially on TV - because I am into the myth myself. I believe in qi, and the idea of ancient Taoist monks hurling balls of energy around, and the convenient confluence of spirituality and combat.It would be hard for me to watch a beautiful Taoist flow around the ring in his robes, only to run into an elbow and collapse. 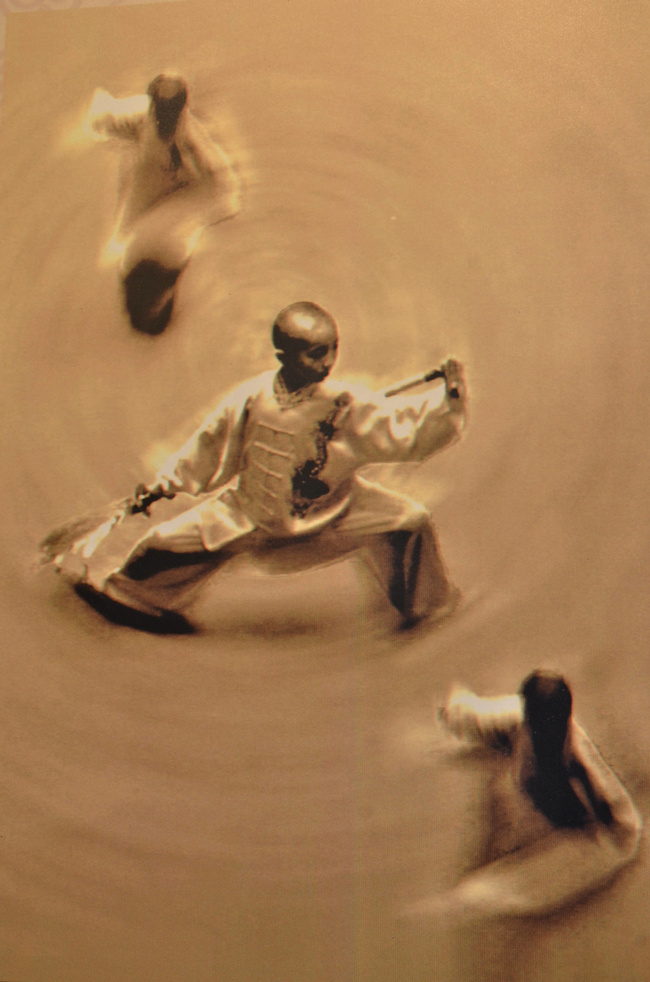 [Ed note: Despite the author's best efforts, the fight went down. The Taiji guys won 3 fights to 2.]