Tale of the Mixtape: Mayweather vs. Pacquiao 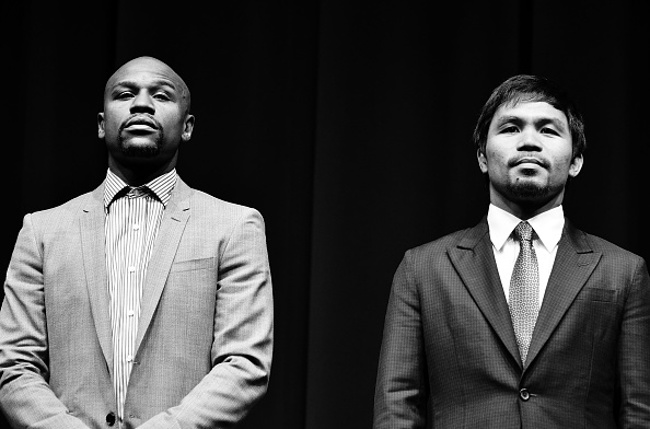 Mayweather vs. Pacquiao isn’t just the most highly anticipated boxing match of our generation, it’s also a legitimate crossover hit. In addition to being sports history in the making, it’s a pop culture event. It’s dominating celebrity gossip, talk shows, and the music world in a way that boxing really hasn’t been able to manage since the heydays of Mike Tyson’s career and, for once, both competitors seem to be up to the task with famous friends, famous feuds, and musical careers of their own.

To help the entertainment world prepare for the May 2 match in Las Vegas, we’ve taken a moment to asses Floyd Mayweather Jr. and Manny Pacquiao’s contributions to the music and their social capital in that universe.

FAMOUS BETS
Mark Wahlberg and Sean Combs have a $250 000 bet on the fight, with Marky Mark taking Pac-Man and Diddy favoring Mayweather. Friend-turned-foe-turned-friend 50 Cent says he’ll be putting down $1.6 million on Mayweather for the fight Meanwhile, Manila Livewire is reporting that Justin Bieber is betting $2 million on... Pacquiao?

Advantage: Mayweather
Mark Wahlberg is a man of questionable morals who gave us The Funky Bunch and “Good Vibrations.” Justin Bieber is a deadbeat monkey dad who gave us a series of singles like “Baby.” At least Diddy gave us some memorable hits. And “In Da Club” hasn’t aged that poorly. 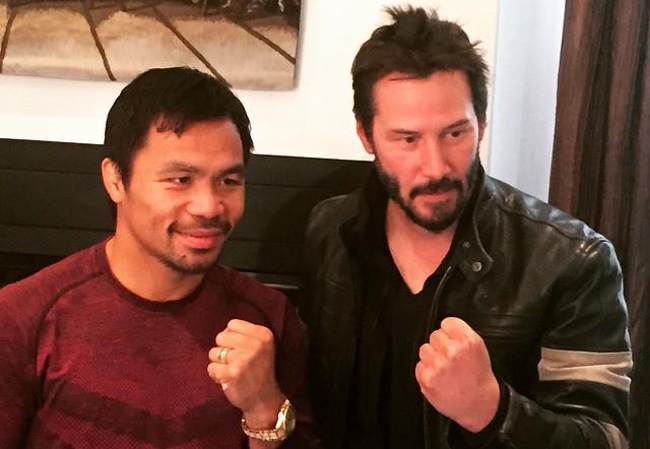 Pacquiao is a little lower profile, but he is good friends with Mark Wahlberg and seems to have a professionally amiable relationship with Jimmy Kimmel. Keanu Reeves (who is almost a musician... remember Dogstar?) visited him during his training last week.

Advantage: Mayweather
On a philosophical level, this is up for debate. Is it really better to have more famous friends? Is it meaningful in any way? Sure, Mariah Carey will show up for a photo op, but do you think she’s really there when it comes to the crunch?

If you’re just counting the number of famous musicians on Team Money vs Team Pac-Man, though, Mayweather is the clear frontrunner. 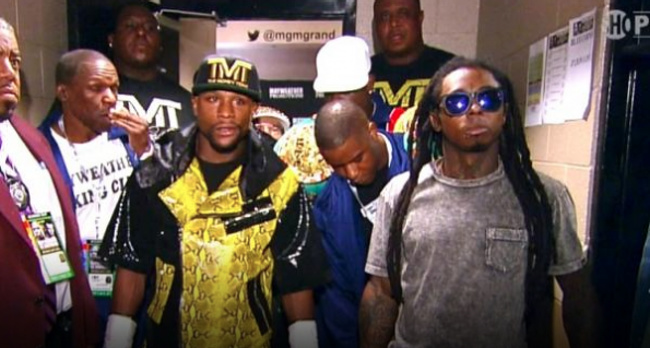 POTENTIAL WALKOUT PARTNERS
Longtime Mayweather hypeman Justin Bieber, who has been with Money since he accompanied him to the ring alongside 50 Cent and Lil Wayne in 2012, promises to be back in his buddy’s corner for this match. In an effort to balance out that star power, comedian and late night host Jimmy Kimmel has offered to join Pacquiao on the way to the ring and even sing his walkout song with him. Oh, and he’s willing to beat up the Biebs.

Advantage: Pacquiao
Bieber is, undeniably, the bigger star here. But Kimmel’s surprisingly eager take on Pacquiao’s theme song and his general giddy fondness for Manny over the years manages to inspire the kind of goodwill that has largely eluded the Biebs since puberty. 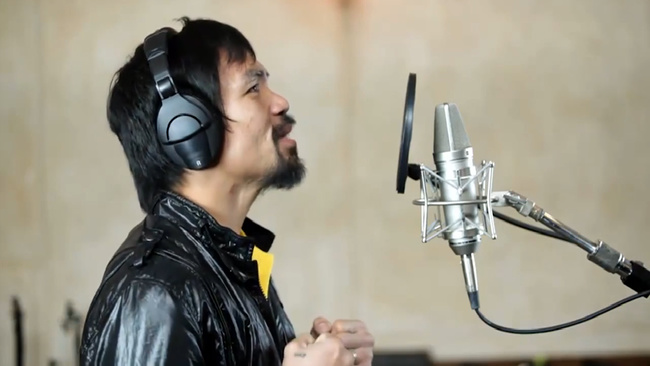 MUSIC CAREERS
Pacquiao released two full-length albums and a number of singles of varying levels of seriousness over the course of his musical career. He’s performed with Will Ferrell, and Dan Hill, and tried his hand at the omnipresent Frozen hit “Let It Go.” Although he officially retired from music earlier this year, saying “I love music... but I don’t think music loves me,” he is using one of his own songs, "Lalaban Ako Para Sa Filipino" (I fight for the Filipino) as his walkout music for this fight.

Mayweather has also dabbled in music over the years. He tried rapping in the aughts (), and collaborated on a sappy, sentimental track called “That’s My Bitch” with Earl Hayes and Ray J a few years ago.

ADVANTAGE: Pacquiao
His first album went platinum back home in the Philippines. His “Sometimes When We Touch” cover was a top ten soft rock hit. And it’s just a little easier to listen to than Mayweather’s flow. 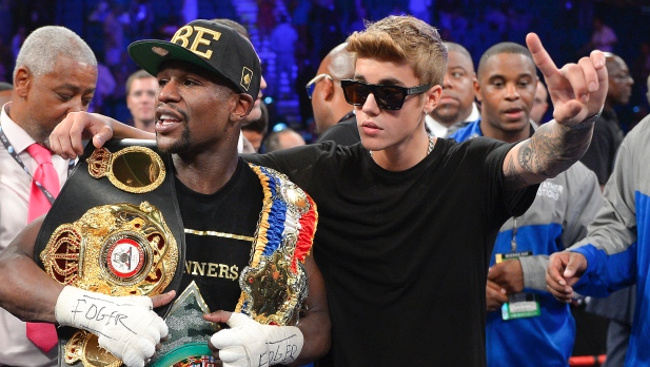 QUESTIONABLE CANADIAN POP STAR ASSOCIATIONS
Mayweather has been palling around with Justin Bieber for the past three years. They train together and walk to the ring together. Biebs sings for Money’s children. Biebs will also be showing his support by, um, tweeting news about his new music during the fight.

Pacquiao, on the other hand, is friends with Dan Hill, the notoriously and unapologetically sentimental pop singer and songwriter who scored a couple of hits in the 70s and 80s with “Can’t We Try” and “Sometimes When We Touch.” The musician and the boxer connected after Hill caught Pacquiao singing “Sometimes” on TV. They went on to record a version of the song together and became good friends in the process. Pacquiao has given Hill tickets to his matches, but the singer can’t bear to see his friend fight because that’s how sensitive he is. Sometimes when gloves touch Manny’s face, the honesty’s too much.

Advantage: Pacquiao
Both Hill and Biebs have left less than ideal marks on Canada’s pop music reputation, but Hill has certainly been the less annoying of the two. And the story he wrote about working with Pacquiao for the Canadian newspaper The Globe and Mail is actually pretty charming. 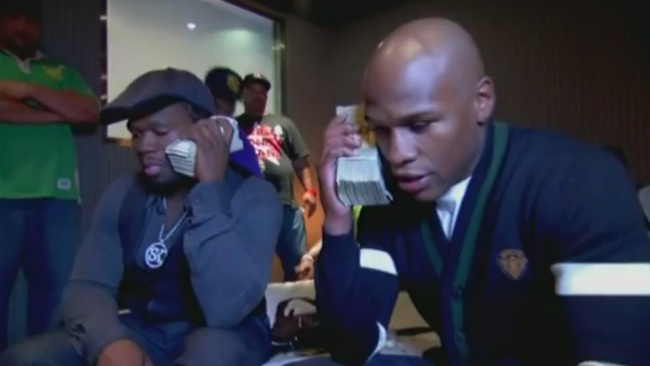 50 CENT’S AFFECTIONS
Fiddy and Mayweather’s longtime friendship, in which the pair happily burned hundred dollar bills, drank prohibitively expensive brandy, smoked pricey cigars with strippers, and occasionally appeared in public with Justin Bieber, went south in 2012 when Mayweather was sentenced to 90 days in prison for assaulting the mother of one of his children. While Mayweather was incarcerated, someone accused 50 of messing with one of Money’s boxers and things just exploded from there. 50 claimed that Mayweather owed him $2 million in business expenses. Mayweather refused to pay it. Last summer, 50 upped the ante by offering Mayweather $750,000 if he could read a page of a Harry Potter book. After running into each other at a recent Chris Brown show (it’s so weird that Mayweather would like Brown! What could those two have in common?), though, the two have managed to bury the hatchet.

While 50 Cent and Money were feuding, Fiddy worked on a promotional venture with Pacquiao.

Advantage: Mayweather
It was only ever business with Pacquiao. Mayweather and 50 are brothers. They may fight, they may take shots at each other’s literacy, but they’ll always love each other.