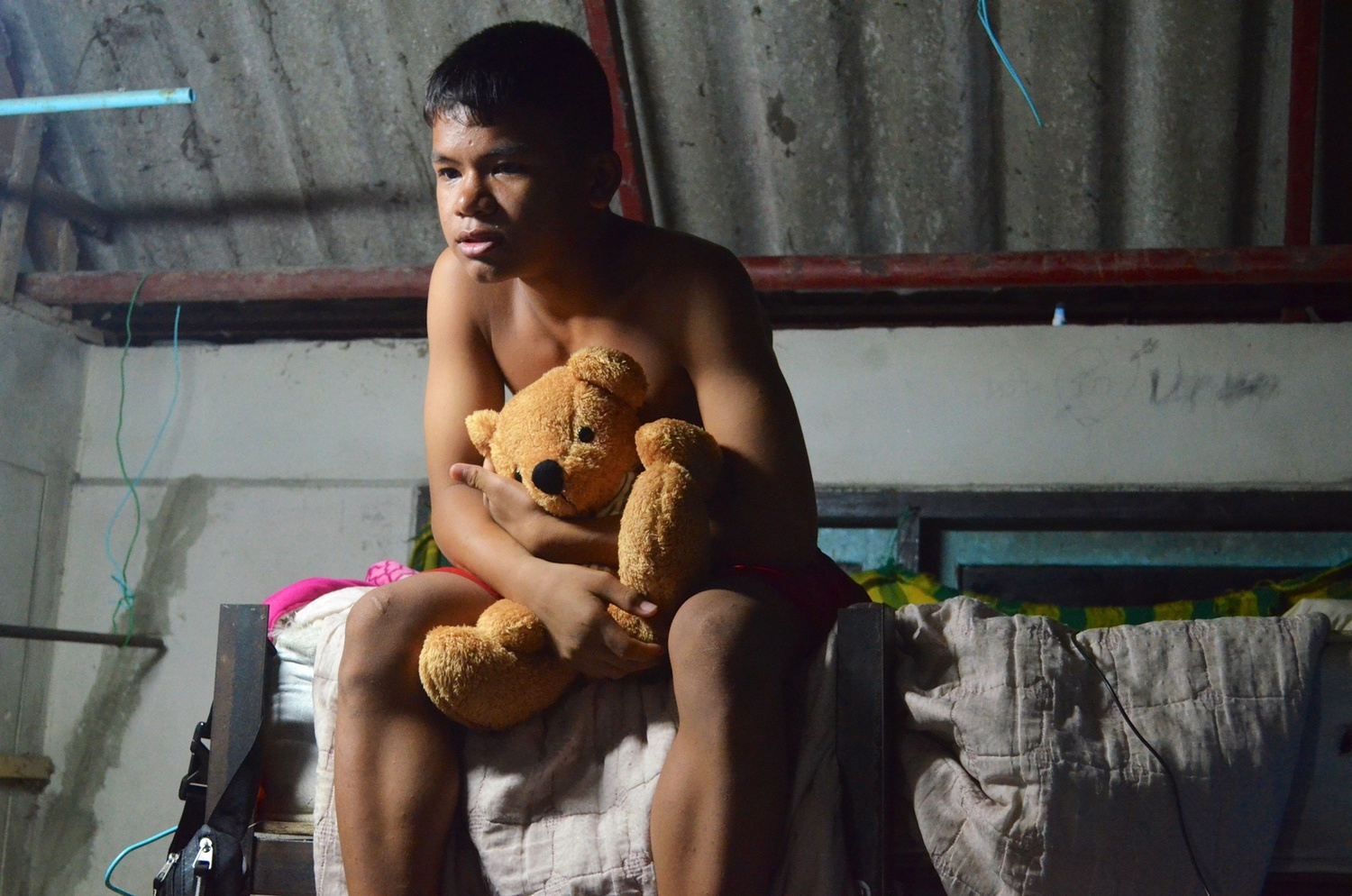 From a young age, Tanwa had been told he was a bad kid. His stepmother was abusive, and his father did little to curb her mistreatment of him. He became used to the insults, grew resilient from it. He started priding himself on never backing down, not even when a group of adult men cornered him and his two kid brothers after a fight he'd narrowly lost. Tanwa was 12.

It happened in Tanwa's home province of Trang about two years ago. Tanwa thought he'd win the fight for sure; he'd already won the first four rounds. The judges saw it differently. They awarded the fifth round to his opponent, as well as the entire fight. When the ref raised the other boy's hand, Tanwa looked to his corner in confusion.

Tanwa's two little brothers, 7 and 10 years old, followed him to a quiet spot backstage, where they helped him remove his gloves and wraps. The three children were soon approached by a group of adult men.

"They looked really angry," Tanwa remembers. "There were four or five of them, all gamblers. They started yelling at me, 'Why didn't you fight better?! Why did you lose?!'"

Quick to anger and with adrenaline from the fight still saturating in his brain, Tanwa shouted back. "I don't know why I lost! I was fighting well!"

The men continued yelling at the young fighter. Tanwa's two little brothers stood behind Tanwa and held onto his hands tightly. 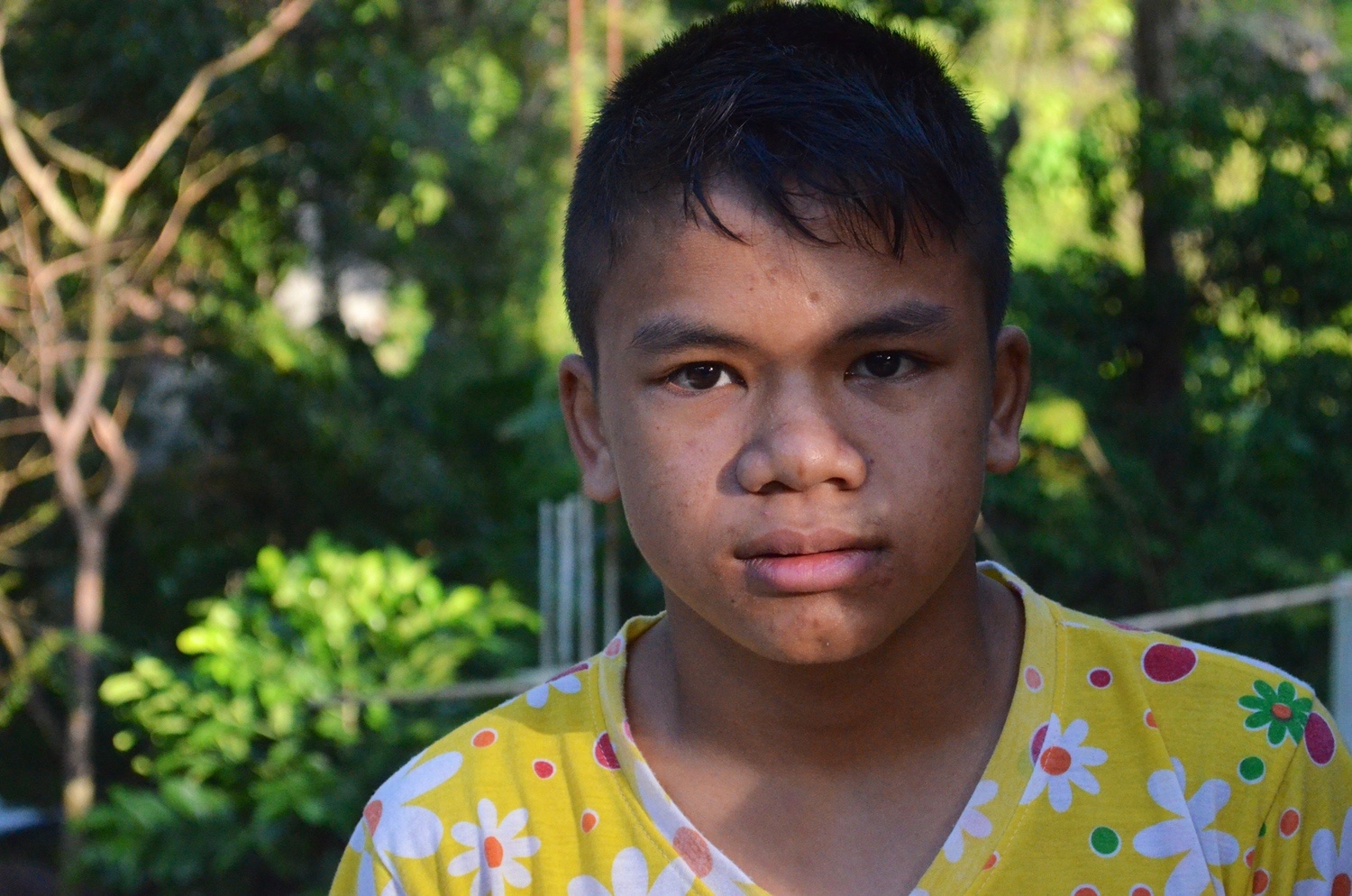 No adults were present to defend Tanwa and his brothers. Their parents were off waiting by the car, and Tanwa's trainers were preparing other fighters. But 12-year-old Tanwa refused to back down. He took a step toward the gamblers.

"I was so angry. I felt like I wanted to fight them and hurt them. I didn't want to run away or cry. I just wanted to make them stop yelling. I told them to go away, yelled that it wasn't my fault they'd lost money."

Tanwa yelled back at him, told him he was stupid to have bet so much money.

"My brothers pulled me away. They said, 'Don't argue back!' They were scared, but I was angry."

Eventually the gamblers left the children alone. Tanwa didn't tell his trainers what had happened. He did, however, tell a few friends, also child fighters. Some of them said they'd experienced similar conflicts with gamblers when they too lost in close fights.

Two weeks later, Tanwa was back in the ring for a rematch. This time, he was not favored to win. Before the fight, he recognized some of the gamblers in the crowd, the same old men who'd levied insults and abuse at him just weeks before.

"When I fought that second time, I was angry at those gamblers who had yelled at me the last time. I think my anger helped me fight better. I didn't want to be yelled at again."

The motivation worked. Tanwa won the rematch. A disappointingly few gamblers cheered, but at least no strangers screamed at him backstage. 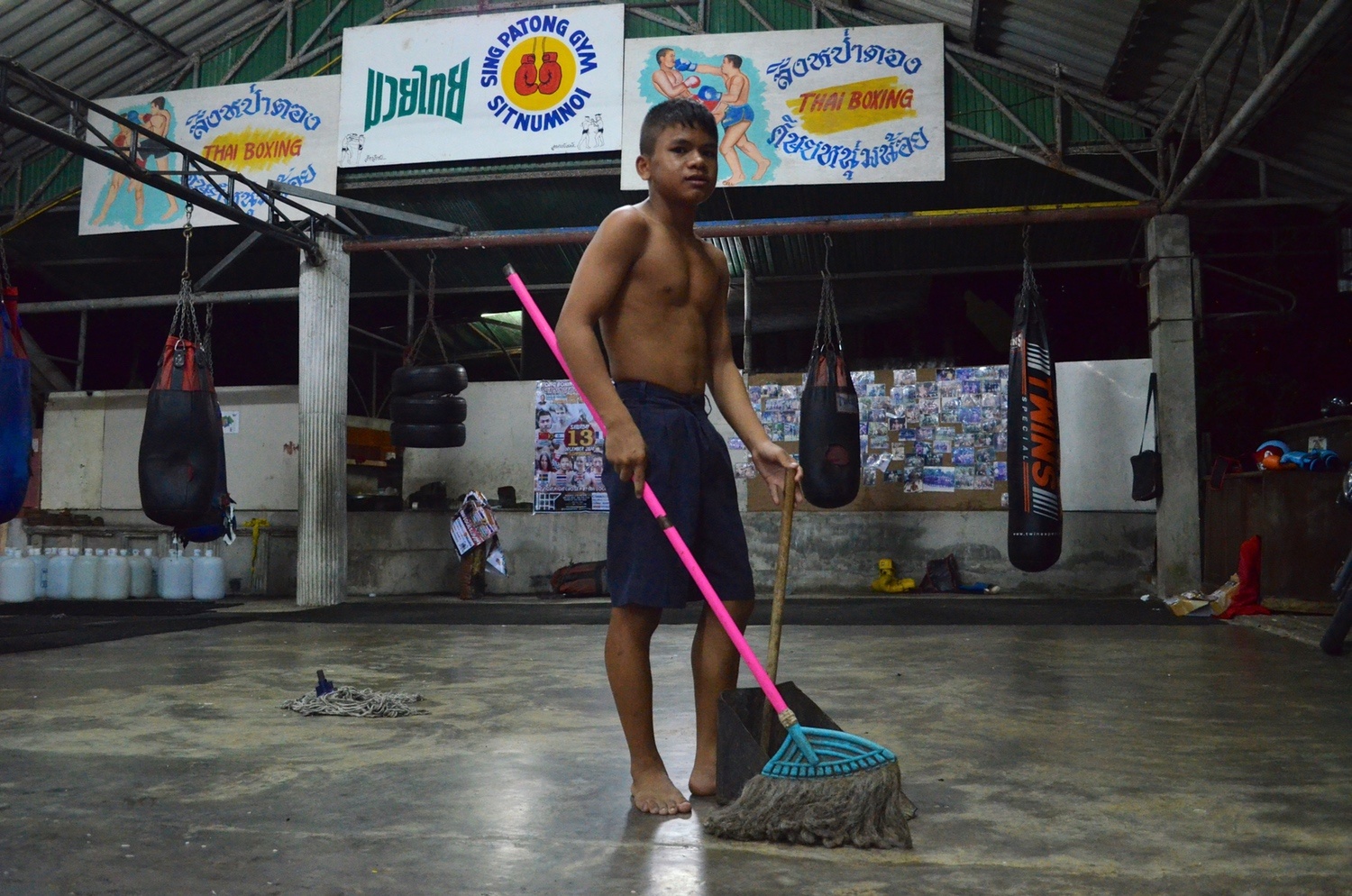 Now living and training full-time at Singpatong-Sitnumnoi Gym in Phuket, Tanwa has been away from home for nearly two years. When I asked him about his family life, Tanwa said the reason he hasn't been home even to visit is because he's "too lazy to go back," and because he thinks his family might ask him to stay. They work in construction, he says. Maybe they will want him to help out.

The trainers know differently. They know about his rough home life in Trang. His birth mother is gone. It's unclear whether it's due to death or divorce; Tanwa doesn't talk much about that. His stepmother never liked Tanwa. She lavished special treatment upon her own son, and tensions grew. Life in their house was marred by abuse. Tanwa found ways to avoid being home.

After his uncle introduced him to Muay Thai, Tanwa spent more and more time at the small village gym, sometimes even sleeping there. His father and stepmother stopped asking him to come home.

A year later, the gym owner in Trang offered to send him to Singpatong, a bigger gym with better connections. He told Tanwa this new gym, far away in Phuket, liked to take in boys and raise them into adulthood as professional fighters. "You can fight in Bangkok," the gym owner said. "Singpatong raises champions. You could be one of them." 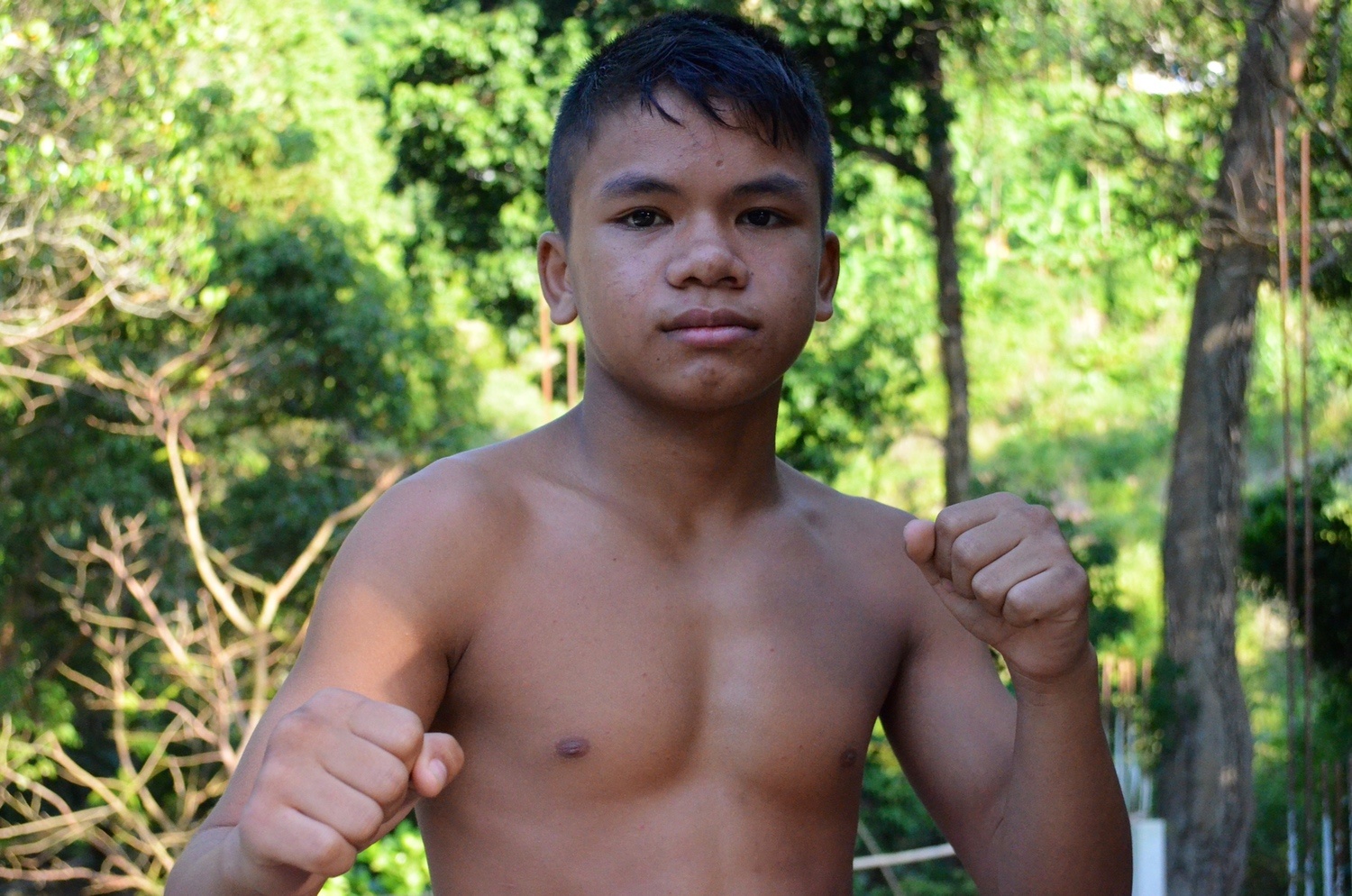 Tanwa left for Phuket when he was 12. He already knew most of the boys at his new gym; many of them were from his same home province. The boys integrated him into their community, keeping quiet the pity they felt for his bad home life. The way the trainers treated him was an improvement over his family life, and Tanwa adjusted well. The only thing he missed about home was his little brothers.

A couple months after arriving at Singpatong, Tanwa started fighting in Phuket. His style was emotionally driven, full of heart but short on technique. "He doesn't care about anything other than winning," one of the Singpatong owners told me. "Hit and punch him, he doesn't care. He keeps moving forward. He doesn't block well, no technique, but he'll go for a win at all costs. Strong heart, but not careful."

It's been two years since Tanwa first came to Singpatong. Now entering eighth grade, he's racked up more than 30 fights in his young career. He does well in school and is picking up English from the Singpatong's foreigners, who have nicknamed him "Little Old Man" for his prematurely-aged appearance.

Tanwa's Muay Thai technique is slowly improving, though his unpolished, aggressive style predominates his performances. Most of his fights are in Patong Stadium on Sainamyen Road in Phuket. He watches the gamblers in the stands, wonders if they're betting on him. He's popular among gamblers who like to take a risk on a strong, exciting brawler whose heart often makes up for his unreliable technique. 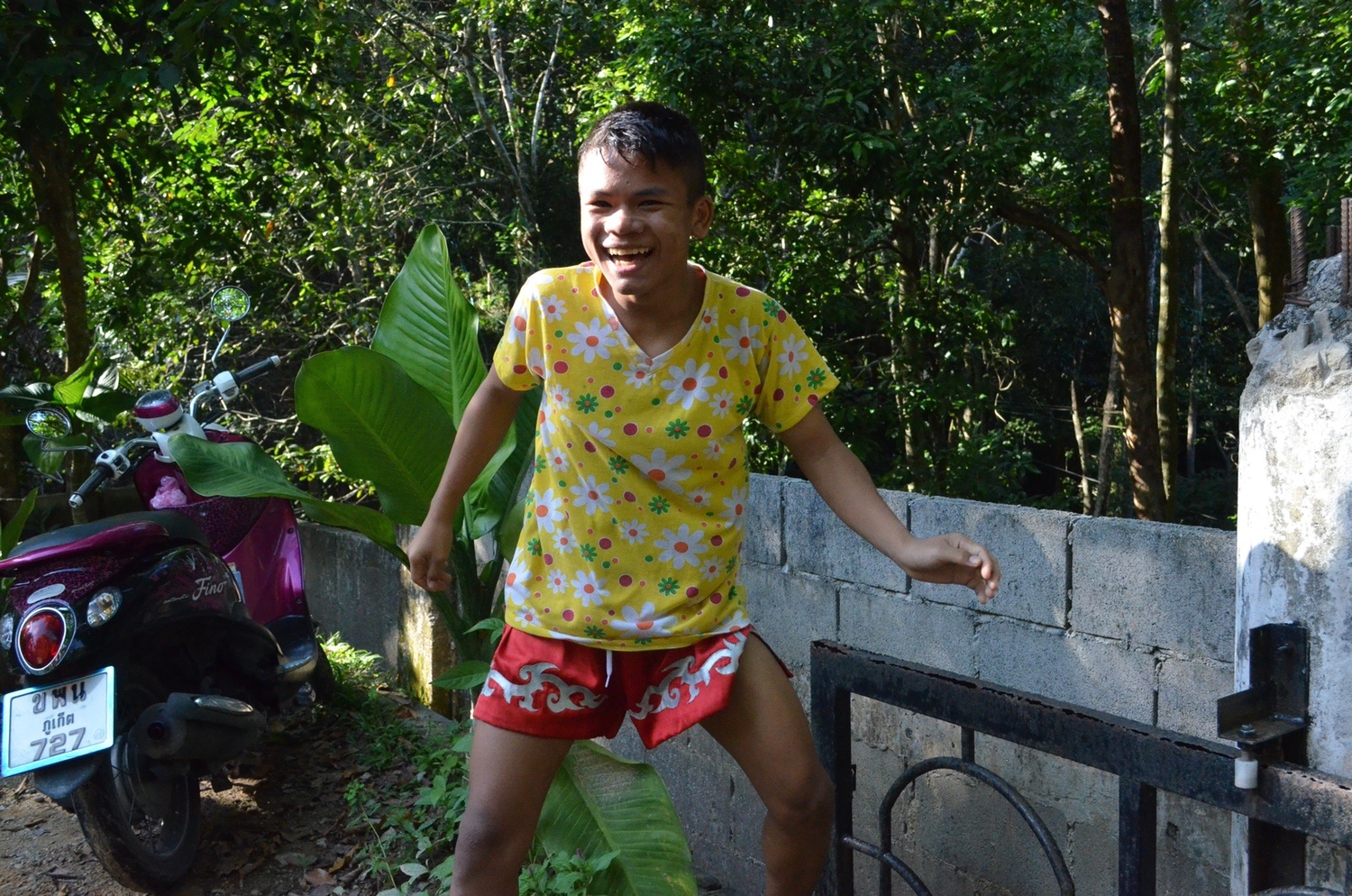 No gamblers have verbally assaulted him since that time back in Trang when he was 12. "If a gambler ever yells at me again, I won't bother saying anything back," he says now, older and wiser at age 14. "Yelling back at them would just make me angrier."

Tanwa is no longer afraid of what the gamblers will do if he loses a fight. In fact, he likes it when people put money on him now. It means they'll be out there cheering for him.