Tapped Out: At the Premiere of Anderson Silva and Lyoto Machida's New MMA Film 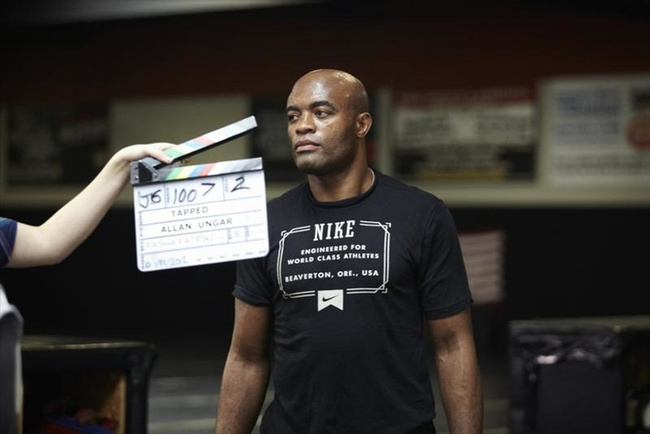 All red carpets are pretty much the same thing, no matter what they’re for. I’ve worked them at movie premieres, star-studded concerts, awards shows, and charity events. They generally consist of the same series of events: Celebrities and other notable people walk along a colored rug, and pose against a backdrop adorned with the logo of the thing they’re attending or endorsing (and its sponsors). Members of the media stand on the edge of the carpet and ask said celebs and notables about the event and their clothes and some sort of wacky question that they hope will help them stand out from the rest of the recording device-wielding throng. In between, the media make small talk with each other and the more “brand”-savvy reporters ask each other to take photos of them interviewing famous people for their social media profiles. No one talks about shinbones. And they certainly don’t discuss tibia and fibula fractures in graphic detail.

At least that was the case until I covered the red carpet for the Toronto premiere of Tapped Out, a new Karate Kid-meets-MMA action film that features a performance by an up and coming actor named Anderson Silva at the Scotiabank Theatre this past Thursday. The Spider—and his costar, Lyoto Machida—had originally been expected to attend the event but were forced to cancel last minute. Their absence got some people on my side of the red carpet in a speculative mood as we waited for the stars to arrive.

To use an absolutely terrible metaphor, that joke was like a checked kick that broke the awkward quiet between various members of the MMA and entertainment press. After that, everything continued in a direction it probably shouldn’t have. 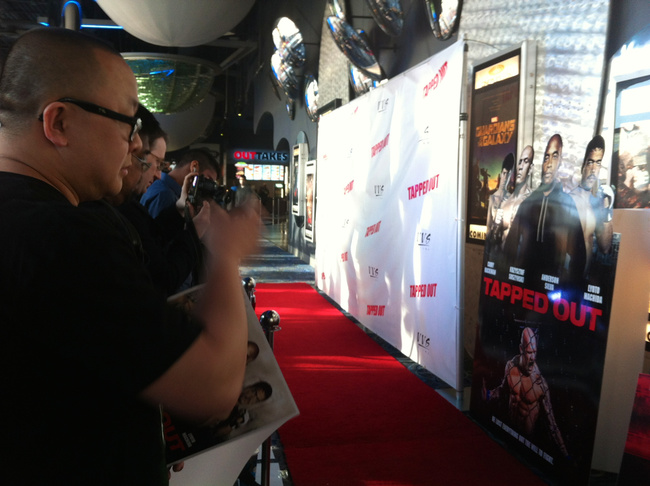 A couple of MMA reporters excitedly discussed Silva’s recovery. A personality from a local Top 40 radio station admitted that he’d seen footage of The Kick, but didn’t really know many of the details. Then, the MMA people provided him with those ever so specific details. Just an amiable and casual conversation about a graphic injury that most fight fans, sports fans, rubberneckers and poor unsuspecting people who accidentally clicked on GIFs of the event still see every time they close their eyes.

The only thing weirder than the topic of conversation was the tone. While media members and fans alike were bummed to find out that we wouldn’t have the chance to see or talk to Silva and Machida, no one was particularly perturbed by the development. The pervasive mood in the moments leading up to the film’s remaining stars appearing on the red carpet was one of earnest excitement. Appearances by a couple of UFC living legends would have been mere icing on the cake. The film itself was, if you’ll forgive the cheesiness of the sentiment, the real star of the night. And everyone seemed genuinely eager to see the modern take on the old plucky-underdog-finds-his-way-through-martial-arts story that it promised. 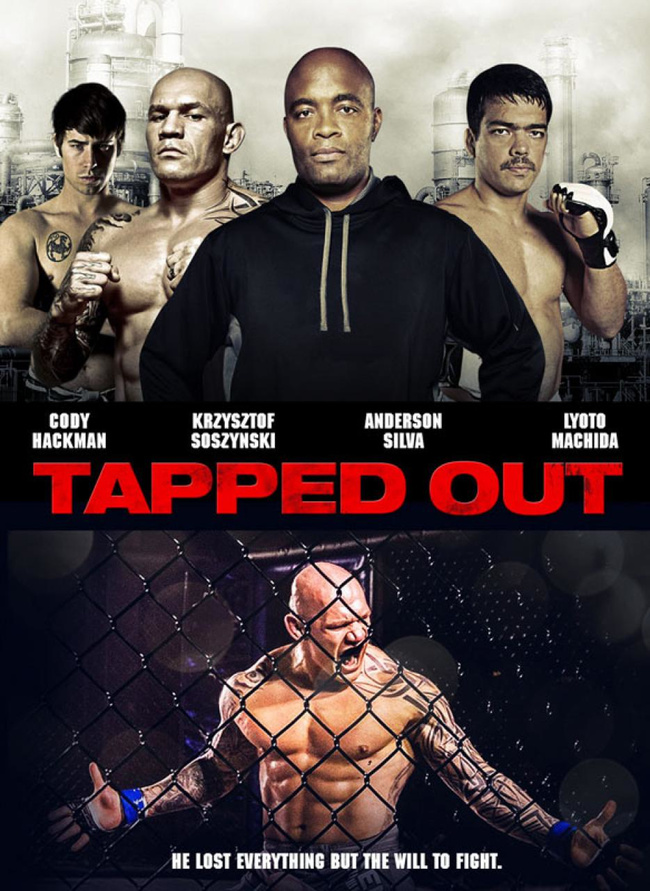 Martial artists and martial arts fans will always be at least partially earnest people. No matter how you mix those arts, no matter how many skulls and axes you put on the t-shirts, no matter how chain-linked you make the perimeter of the fighting surface, there is always going to be something a little spirited left at the heart of the matter. Martial arts are, after all, based on the idea that hard work, dedication and focus always triumph. That technique and skill prevail. And, that all of those things combined can make Goliath tap out to David. There’s very little room for cynicism or irony in that world.

That’s the reason why a bunch of grown-ass, ostensibly blood-thirsty fight fans could find themselves excited about a movie about a rough-around-edges young man who returns to his karate roots in an effort to beat the man who murdered his parents in an underground MMA tournament. The fact that Tapped Out was made by a group of similarly minded people is the reason why the film actually works.

I got a taste of that keen sincerity when I interviewed star and co-writer Cody Hackman and fighter-turned-actor Krzysztof Soszynski, who plays the parent-murdering bad guy, earlier in the day at a local Muay Thai academy. Sitting on the mats between a well-worn ring lined with Thai pads on one side and a pack of heavy bags on the other, I listened to the pair talk about their passion for MMA, their love of fight films, and the desire to do right by both of those things with Tapped Out. Soszynski, aka The Polish Experiment, who has been dividing his time between acting (most notably, he played the villain in Here Comes The Boom) and working behind the scenes in the UFC since retiring from the light heavyweight division last year, was quick to praise the film’s story and the verisimilitude of its fight scenes. As much as he loved Here Comes The Boom, and as much as he loved performing in it, he admitted that he found the fights to have a bit of a pro-wrestling influence to them, and said he was proud of how realistically his sport was portrayed in Tapped Out. He also gave Hackman credit for how well his writing explained MMA to audiences who might not be completely familiar with it yet.

Hackman, a five time world champion Karate fighter-turned actor and writer, was equally enthusiastic about the way that his chosen discipline comes across on screen, and he happily geeked out about its place in modern film and modern martial arts in great detail. As a fellow Shotokan Karate disciple, he also admitted that he was particularly happy to have Lyoto Machida in the movie. In between answers, I caught him eyeing the heavy bags.

As the interview wound up, Hackman could no longer resist the temptation. He walked over to the bags and kicked one.

“Did that hurt?” Soszynski smiled.

“A good hurt!” Hackman beamed. “You know when you haven’t trained for a while and those first kicks kind of burn? It’s like that.”

My first impulse was to make fun of him. But then I realized that I knew exactly what he was talking about. I kind of enjoyed that same type of burn in my own training.

As I left, both of them asked me to find them after the film and tell them what I thought. “And be honest!” Hackman added. He insisted that they really wanted constructive feedback and wanted to know what people in and outside of the MMA community thought of their work.

When Hackman and Soszynski finally hit the red carpet along with director Allan Ungar and a number of their co-stars later that evening, it was clear that everyone shared that guileless giddiness. As I took poorly framed photos with my iPhone, cast and crew expressed similar sentiments about the twin powers of martial arts and a good story. Cobra Kai sensei Martin Kove himself, who has a small role in the movie, even showed up to talk about how much he loved the project and how happy he was to see a movie returning to the values that he loved so much when he starred in The Karate Kid (and The Karate Kid 2 and The Karate Kid 3). Everyone was so bloody excited and enthusiastic that I started to worry about how I would politely let them down if anyone did asked my opinion after the screening and the thing turned out to be a total cheese-fest.

About ten minutes into Tapped Out, I stopped worrying. It’s not a perfect film. It’s not particularly bold or groundbreaking. Still, it is exactly what the filmmakers set out to make: a good old-fashioned fight film.

Michael Shaw, a troubled young man who witnessed his parents’ murder as a child, rediscovers his boyhood love of karate when he’s sentenced to do community service at a local dojo. He meets a girl. The girl takes him to an underground MMA event where he realizes that the most popular fighter is the man who killed his parents. He turns to karate (and a couple of ground game experts named “Anderson” and “Lyoto”) in an effort to avenge his mom and dad.

It’s a little cheesy, but in a way that is neither unaware nor apologetic. Tapped Out wears its heart on its gi sleeve throughout and the result is every bit as disarming as well practiced punch taught by a cranky but lovable Karate master.

I was going to tell Hackman and Soszynski as much on my way out of the theater, but there were lines forming to talk to both of them. The demographics of both lines were impressively diverse. Grandfatherly types wanted to shake their hands and tell them that they did a fine job. Starry-eyed young men and women told them that the movie was going to be huge. Fanboys in T-shirts that said things like “Mama Said Choke You Out” asked for autographs. No one wanted to talk about tibia fractures anymore.

Tapped Out is a Lionsgate film, and is available in theaters in Brazil on May 16 and will be on DVD, Video on Demand, and Pay-Per-View on May 27, 2014.