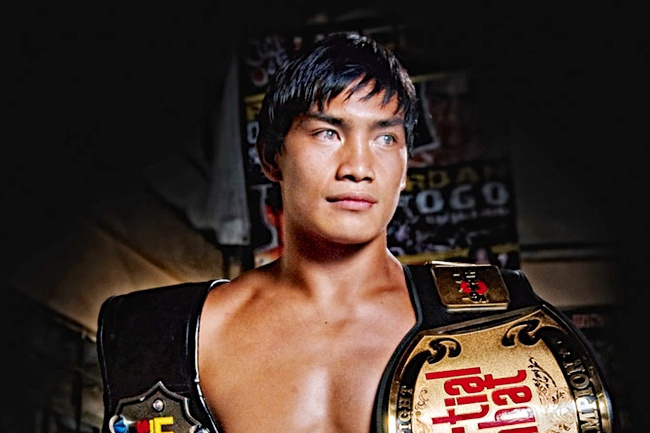 Take a look at the top Filipino fighters, the ones who are making waves in major international organizations like ONE FC or the UFC, and the chances are you will see that they are listed as being part of Team Lakay.

It is no exaggeration to say that 90% of the best mixed martial artists the Philippines has ever produced come from Team Lakay. Fighters like Eduard Folayang, Honorio Banario, Mark Eddiva, Kevin Belingon, Rey Docyogen, Roldan Sangcha-an and Geje Eustaquio all emerged from the Baguio based camp.

What makes Team Lakay’s success so remarkable is that for most of its existence the operational budget has been close to zero, the camp barely makes enough to cover its own costs and the pool of talent comes almost exclusively from the local area.

Team Lakay does not have access to air conditioned, state of the art training facilities. Instead its fighters can be found working out on the top floor of a rundown building on a nondescript street, in a crowded room containing nothing but sweat soaked mats. 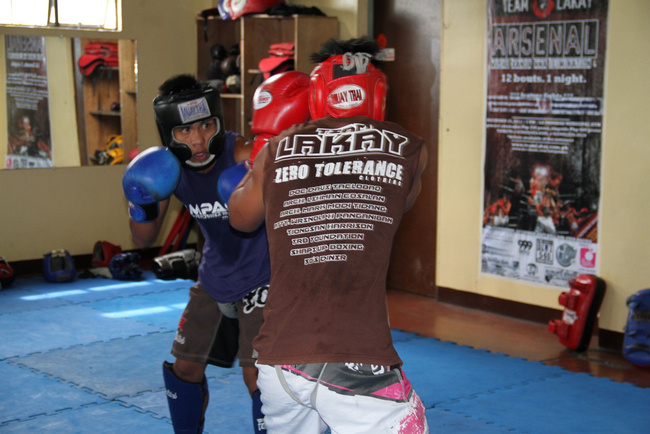 If you are up early enough you might get a glimpse of them running up and down the mountains which surround Baguio, or pumping iron in a tiny gym next to a football pitch that the local council lets them use for free.

Their success has been built on simple, old fashioned values and the fighters all seem to be possessed with the will to train harder and longer than any normal athlete. This work ethic has brought its rewards and Team Lakay has collected an enormous array of silverware since its inception.

Although Galera, who made his UFC debut earlier this year, was born in the US the vast majority of these fighters are Baguio born and bred and followed in the footsteps of Team Lakay founder Mark Sangiao by attending the nearby University of the Cordilleras. 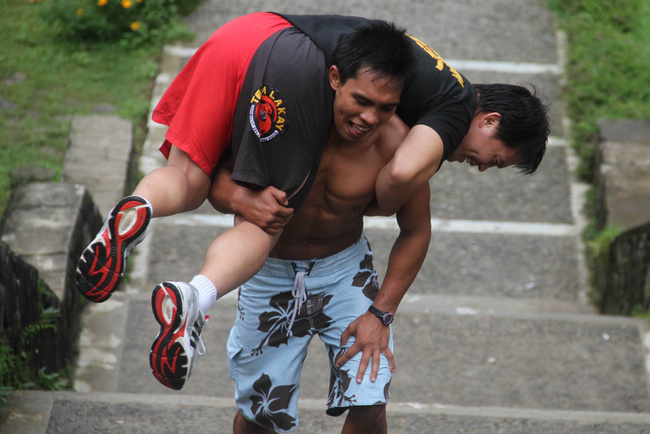 Sangiao is the Team Lakay founder and head coach and without him it is highly doubtful that Baguio would have established itself so firmly on the Filipino MMA map. He had already won a gold medal in Wushu at the SEA Games when he decided to take up the sport after finishing a criminology degree.

“I started MMA after I graduated in 2003. I had been a member of the national Wushu team and the varsity Tae Kwon Do team of the University of the Cordilleras and I decided to cross train with Judo team and Jiu Jitsu to become a more complete fighter,” he told me.

Sangiao, who was then the URCC bantamweight champion, formed Team Lakay in 2005 to give aspiring local mixed martial artists the opportunity to train and potentially compete alongside him. Nearly ten years on the links to the University of the Cordilleras remain strong.

Folayang, Belingon, Eddiva and Eustaquio are all alumni of the University of the Cordilleras which, thanks largely to Sangiao, has become a virtual conveyor belt of Wushu practitioners transitioning to top level mixed martial artists.

Team Lakay’s fighters are renowned for their heart, stamina and aggression. This is partly due to the training techniques Sangiao employs and the values he tries to instill in his students but the area’s environment and culture also plays its part.

Baguio is approximately 5,000 feet above sea level and Manny Pacquiao has travelled there specifically to conduct fight camps in the past. Training at altitude is believed to give fighters an advantage as they will have a higher concentration of red blood cells when dropping down to sea level to compete.

The scientific benefits of altitude training have been disputed but Team Lakay’s members have fighting in their blood because the vast majority belong to the Igorot tribe whose warriors took on American artillery armed only with spears and shields at the turn of the previous century.

The Igorot’s were also notorious headhunters and a historian described their style of combat as follows,

‘Their battles are full of quick and incessant springing motion. There are sudden rushes and retreats. It is a man's agility… that preserves his life.’

Speed and flexibility are attributes which define the current crop of Igorot warriors on Team Lakay and, while years of Wushu has undoubtedly played its part, Sangiao thinks that his team have also inherited certain attributes from their ancestors.

“The Igorots are known to be warriors especially the men, our ancestors were headhunters who cut the heads of their enemies and each head was like a trophy for them, a sign of victory. That is also why most of the parts of the Cordilleras were not conquered by the foreign invaders,” he said.

Team Lakay’s fighters seem to all be softly spoken graduates who attend church every Sunday and would not countenance the idea of committing a violent act away from the ring or the cage, let alone dismembering a vanquished opponent, but Sangiao says they are all fiercely proud of their tribal heritage,

“Being a warrior runs in our blood. Of course that (the headhunting) was before, now we fight for what we know is right, we fight to bring honor and glory to our heritage.”

Sangiao has made considerable personal sacrifices in order to build Team Lakay. His 7-2 record would be enough to secure a lucrative contract with either ONE FC or the UFC and at 33 years of age he should still be in his prime but hasn’t competed for nearly five years.

While his students are regularly being offered televised fights in large indoor stadiums and arenas Sangiao is stuck on the sidelines but he says that building Team Lakay leaves him no time to go in pursuit of personal glory.

“Being a fighter is always in my heart and I always wanted to come back fighting but the team is growing and I cannot be a coach and a fighter at the same time so I have to set aside my own fighting career to dedicate my time to the fighters.”

If you look at the top teams all over the world, from Jackson-Wink MMA in the US to Tristar in Canada, from Nova Uniao in Brazil to Evolve MMA in Singapore, they tend to take their fighters and in many cases coaches from a wide catchment area.

What sets Team Lakay apart is that it has been formed organically in Baguio with very little outside interaction or support. The coaches all come from the local community and so do the fighters which makes the success which its mixed martial artists are enjoying on the international stage all the more remarkable.

Next Friday night Sangiao will be at the SM Mall of Asia Arena in Manila to corner Eduard Folayang and Rey Docyogen at ONE FC: Rise of Heroes and a few weeks later he will be heading to Brazil with Eddiva, who happens to be Folayang’s cousin, for the TUF Brazil 3 Finale.

Eustaquio is reportedly on the verge of securing a 125 lbs ONE FC title shot and Sangcha-an has been told that his next fight will be for the PXC flyweight belt. It looks set to be a busy year for the man who has almost singlehandedly built the most successful team in the Philippines and Sangiao will be hoping his fighters can bring more belts and glory to Baguio.

I Fought an Inmate in a High-Security Thai Prison