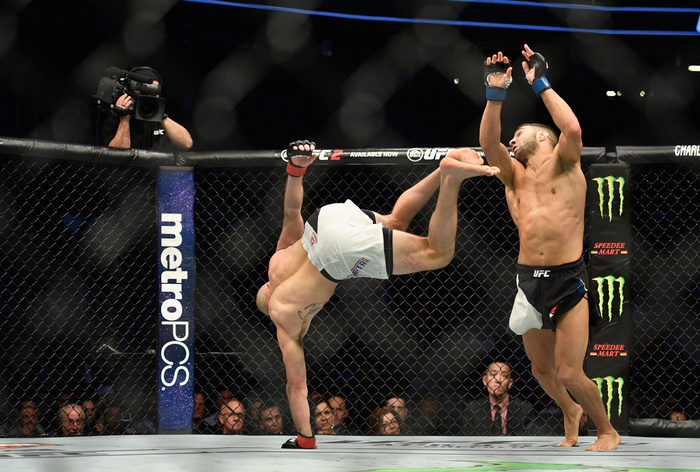 UFC 209 might not have been the pay-per-view that patient MMA fans deserved, but David Teymur and Lando Vannata did their damnedest to blast away any lingering disappointment over the lost Nurmagomedov – Fegurson matchup. Ultimately, UFC 209’s main event followed Teymur and Lando, and stunk up the joint, but for fifteen glorious minutes the Groovy One and the Swedish kicking machine stole the show.

That Damn Side Kick

These are the kind of connections that tire opponents, but often they can also force an opponent to overcommit. He cannot literally move through the low line side kick, so the kicker knows that there’s a great chance he will attempt to move in immediately after it. By being either out of range, or in a side kick, Vannata controls the chances the opponent has to step. This allowed Vannata to set up counter strikes and kick catches.

The simple slide back counter right hand, this will never stop being a great counter to straight forward aggression.

And they also serve to keep the opponent in range for Taekwondo style jumping switch kick follow ups. You will recall these from Conor McGregor’s bouts with Max Holloway and Dennis Siver, or from Alistair Overeem’s bouts with Andrei Arlovski and Mark Hunt.

Where Rodriguez likes to run across the cage with his spins, and his opponent only need retreat when they see him turning his back, Vannata generally attempts his spinning techniques from more sensible positions and doesn’t overuse them to the point where they are all that the opponent expects.  Against Teymur, Vannata attempted most of his spins when Teymur’s back was to the fence (removing the chance of straight retreat)…

Or off his kick catches. Vannata did a great job of catching Teymur’s active left leg, whether it be a high, middle or low kick.

Rather than checking kicks, Vannata seems to be in the Anderson Silva frame of mind where every kick is caught and a counter strike should be attempted. This really slowed Teymur down throughout the fight as he couldn’t step in with his hands behind caught kicks, and couldn’t circle away from Vannata’s strikes when on one leg.

This writer’s thoughts from the signing of the fight were that it would be interesting to see how Vannata’s rapid advances and weaves worked against Teymur’s old school Cro Cop style, circling out to the left and hammering in left round kicks and left straights when possible. For the most part Teymur did well at relieving the pressure and avoiding longer exchanges, circling out to pot shot. Teymur was hurt in a swarm early on, but soon got back on his job.

Teymur’s left leg came in to the inside of Vannata’s lead thigh, to the head, and to the body, occasionally in double ups.

Teymur also had good success with a subtle misdirection, looking high and almost jumping up into a kick from a squatting stance.  Saenchai uses a jump straight upwards to convince an opponent that he wants to kick them in the head, then slots in his shin underneath their raised elbow while he’s in the air. This was a more subtle application of that same idea.

Teymur’s use of the left kicks to set up his left straight was also important. The superman punch is familiar to MMA fans as a big, jumping motion and it was this which caught the eye when Teymur snapped Vannata’s head back with a long superman punch midway through the fight.

But the superman punch can be a smaller motion. Often, against the best strikers, this works a lot better because less motion means less time to ascertain the legitimacy of a feint and react to the follow up.

The punch that made Andy Hug’s career was effectively a superman punch, bringing the rear leg up as if to kick but actually delivering a straight through the guard. This allowed Hug to knock down countless men who had much better boxing than him in the traditional sense.

It might seem like a very limited way for a southpaw to fight, with just the left straight and the left round kick, but these are the classic southpaw double attack. A double attack is two attacks which look very similar or at least start with very similar motions and so play into each other. The reactions of the opponent to each also open him up to the other. Mirko Filipovic’s entire career was built around this. Keep your arm high and braced for the round kick, he’d shoot a left straight down the centre. Start parrying the straight or slipping it, he’d kick you in the head when your hand or head was out of position.

The left kick is effectively a double or even triple attack all of its own as well. Teymur went to the head, body and lead leg. He could conceivably have gone to the rear leg as well. Four targets from the same kick. Had he thrown the left straight to the body he could have complicated things even more. In the southpaw versus orthodox match up, the round kick and the straight can be a lot more than just two strikes.

Vannata was considered to be the more rounded fighter than Teymur coming into this fight, and when he found himself in trouble he used the clinch to smother Teymur, attempting to hit on the exit with a sneaker right hand. In the second round, however, Teymur began to land the kind of knees you only see out of an experienced professional kickboxer. Getting his head below Vannata’s and throwing his hips back to create some space to knee through, Teymur pounded Vannata’s body but the latter absorbed the punishment admirably.

It was mixing in grappling which saw Teymur, not Vannata, pull off the win as the more rounded threat. Taking Vannata down several times—often off that low line side kick.

It was interesting to see Vannata’s low line kick exploited like this. Normally it is more difficult to catch such kicks without reaching down and exposing the head, but Vannata’s consistency with the low line kick and his lack of high kicks with his lead leg meant that Teymur was fairly safe reaching for it. It was a nice way to turn the annoying lead against Vannata. Previously Teymur had thrown a low line side kick of his own at Vannata to draw one in return and attempted to kick Vannata’s head off when it came.

This was a weird, wonderful fight full of cartwheels, jumps, knees and sliding kicks that look like they belong in a side scrolling eighties beat ‘em up. The decision went to Teymur but neither man came out looking bad. On the off chance you missed this, find a way to catch up on it. Thoughtful stylistic clashes like this one are what make MMA the greatest sport on earth.

The Tactical Guide to Khabib Nurmagomedov vs. Tony Ferguson

The Tactical Guide to Woodley vs. Thompson II