The Art (Artlessness) of the Baseball Fight 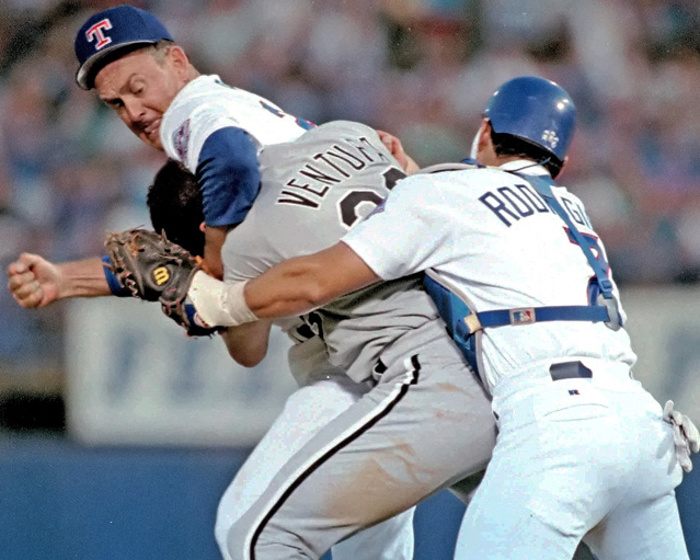 A few days ago, I was out at a pub with a friend of mine who's a striking coach. A fight broke out during a basketball game on one of the TVs in our peripheral vision and caught his eye and his ire.

"Yeah. Just run in with your head forward and your hands down." he groaned before bemoaning the general lack of skill and fortitude involved in the average professional basketball fight.

I agreed with his assessment. But I'd also just been assigned a story where I was supposed to look at the "fighting" involved in another professional sport—a sort of companion piece to my recent hockey fight essay—and the first thing that came to my mind was "At least this isn't a baseball fight."

My history with baseball isn't nearly as intense or informed as my history with hockey—I was a Braves fan who grew up just outside of Toronto in the early '90s, so 90% of my relationship to the sport is just lingering childhood trauma—but here's what I've been able to piece together over the past week:

1. Unlike hockey fights, baseball brawls do not exist in the liminal space between sanctioned sport and street fight. There's rarely any greater psychology to them than retaliation over a pitch that might have been thrown too vindictively. Unless you're the legendary Dock Ellis setting out to singlehandedly dismantle your opponent's intimidating reputation. They are against both the written and unwritten rules of the sport. They appear to represent the very breakdown of civilization on the field.

2. Other than territorial wars over the bases—like, say, lifelong sibling rivalries fought over home plate—there's nothing in baseball that requires its players to be in close quarters with the other team. Or their own teammates, for that matter. It is a sport played in the mid-range, one that doesn't require a lot of kinesthetic awareness of an enemy in your personal space.

When you put those two points together, there's little to no hope for finding anything particularly intriguing about a baseball brawl. They're generally flailing messes executed by professionals who have no skill or moral reason to execute them. Which makes them watching them feel a bit like watching Benedict Cumberbatch's flailing slap fight scene in Starter For 10. Minus Sherlock's criminally underrated penchant for physical comedy.

Here's some of the more fascinating ones I came across in my largely uninformed research on the subject:

After being hit by his pitch at the top of the 7th, Mariner Bill Haselman charged Mike Mussina on the mound. The rest of their respective teams quite literally jumped in and they fought... and fought. And fought. Clothing got ripped! Bones might've been rebroken. The Baltimore Police tried to help, but the umps redirected them to crowd control instead. By the time it was all over, the game had been delayed by 20 minutes.

It's a brawl that has the timing of a comedy skit. Namely the famous Mr. Show skit "The Story of Everest." Every time you think it's over, every time you think they've pushed the fight to its limits and it would just be too much for it to break out again... it breaks out again.

Brawls, be they in baseball or anywhere else, have a tendency to devolve into one giant, indiscernible mass and mess of human rage. But this fight is a treasure trove of details.

Padres pitcher Craig Lefferts, retaliating for an earlier pitch that appeared to nail his teammate in the kidney, incites the fight with an errant throw of his own. Then the Braves charge the Padres and Lefferts just backs away. No one seems to notice that the primary object of their ire or defense is surveying the action from afar, smirking like he drank the Braves' milkshake. From there we get imperfect use of jersey-gripping, clothing-ripping, half-naked yelling, desperate attempts at grappling, and drunken audience participation. There's absolutely nothing here that could come close to impressing anyone who cares about things like skill, logic, and purpose in their fighting, but the lack of talent involved is inversely proportionate to the drama.

"This is the kind of situation where somebody could get hurt, get their finger stepped on.." one announcer opines at the midpoint of this all-out war. "And it's just not baseball."

From his scolding tone and invocation of finger-stepping, you might assume that this was a silly skirmish, embarrassing and a potential threat to the carpals, but nothing more. It's not. At its nucleus, this brawl is downright brutal as far as baseball goes, with punches and kicks being thrown and landing as well as they can when there's dozens of men all around you, trying to surge toward the action and get in a few strikes themselves, forcing you closer and closer into the enemy's range.

The interpersonal issues lingering and occasionally bursting to the surface are also harrowing to watch here, from the war of words that started it all to the former teammates trying to talk it out on the sidelines to other bits of long-festering bad blood popping like a particularly disgusting pimple.

Sure, their respective teams got involved, but this epic battle of wills and not the worst fighting chops you'll find in baseball was really about these two men.

Both the feud and the brawl between Ryan and Ventura played out like perfectly-timed pro wrestling. After three years of brewing tensions, the pair's antipathy came to a head when the 26-year-old Ventura rushed the 46-year-old Ryan. As this was 9 years before the premiere of The Wire, Ventura did not have Omar Little around to warn him that "You come at the king, you'd best not miss."

Ventura came at Ryan, missed, and got his ass and ego handed to him by a man two decades his senior. Then the confrontation blew up into an all-out battle between their two teams and their owners—future president George W. Bush almost got involved—in true battle royal style. The pile-ons have a third-of-the-way-into-the-Royal-Rumble charm to them, but, like the Rumble, the good stuff starts to happen when the less interesting players get picked off. Perhaps the best bit of all, though, is watching a clearly humiliated Ventura pace as he's separated from the action. Then watching Ryan, winded but victorious, casually re-button his jersey as he's pulled away from the worst of the brawl... and then go back for more.

Rougned Odor is a terrible human being who disrespected our city's most prized symbol, The Bat Flip, and The Thrower of the Bat Flip and everything he did was wrong and everything José Bautista does is perfect and please don't hurt me again, Jays fans.

The Art of the Hockey Fight