The Art of Shifting in Mixed Martial Arts 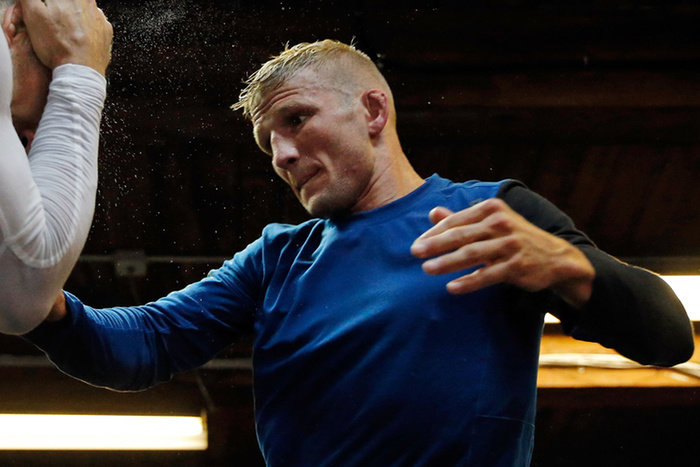 When Robert Fitzsimmons met Gentleman Jim Corbett in 1897 he took a horrific beating. Ruby Rob's nose was open by the eighth and his face was masked by blood by the tenth. Each time Corbett lead he connected. Each time Corbett hit the body, Fitz spat blood. Then in the fourteenth round Fitz put an end to it all with a punch which captured the imagination of the sporting world. Few were there to see it and the film was borderline worthless, leading this punch to become one of the most mythologized in ring history: the Fitzsimmons Shift.

Shifting is the act of stepping into another stance as a punch is being thrown. Simply put, it is the act of walking with a punch rather than sliding with it. The Fitzsimmons Shift was a digging left uppercut or hook to the midsection as Fitz stepped forwards on a diagonal to the right with his right foot. Here is an illustration from USSR head coach K. V. Gradapolov's Tactics of the Foreign Masters.

And here's one from Boks, I'm not sure what the English translation on that is though. 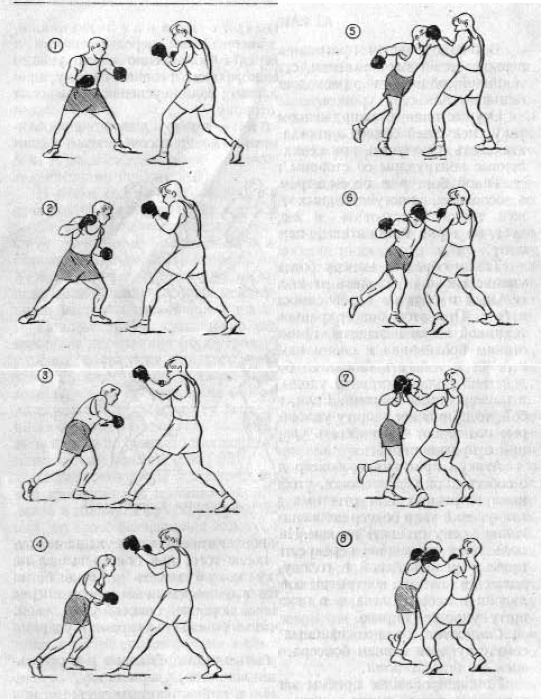 Gradapolov loved shifts and they made it into every book he wrote. They can still be seen in boxers trained in former USSR states from time to time. Gennady Golovkin is always walking with his punches:

You might well think that this would start a trend in which everyone and their mother learned to shift, but that was not the case because the shift is an act of wily craft but it is also an act of bravery.  A shift requires leaving one stance to step into another and at the point that the back foot leaves the floor, the weight is committed through the full step. In the upper echelons of boxing, wherein small openings are quickly filled by counters which have been practiced into instinct, the focus of all techniques is the economy of motion and the fighter's ability to stay on balance and protect himself at all times. The great textbook boxers like Joe Louis and Sugar Ray Robinson didn't shift for this reason. The shift opens up a whole world of offensive possibilities, but the consequences of getting hit while stepping or with the feet together are tremendous. Get hit with your feet out of position and it doesn't matter how good your chin is, you're going to get knocked over and in boxing that means and instant 10-8 round for your opponent.

It has happened to pretty much every effective switch hitter, no matter how talented. T.J. Dillashaw against John Dodson, Demetrious Johnson against the same, Dominick Cruz against Urijah Faber, hell it was a common feature of Naseem Hamed's career. If you switch stances on the regular, you will get clipped out of position at some point. You might remember that Jose Aldo loves to use a running left hook to the body:

Attempting an almost identical lunge into a left hook ran Aldo onto a left hand which ended his night early against Conor McGregor. But once you understand the dangers of shifting and realize that the whole point is to change things up on the opponent, not to smash the idea into the ground and become just as predictable in your own notion of unpredictability, shifting becomes a lot less scary.

Benny Leonard was one of the next professional boxers to popularize the shift and his was what is termed a 'drop shift'. It is interesting that at the time of Leonard's popularity, fighting southpaw was still considered abhorrent, but that Leonard used the drop shift to get to a southpaw stance momentarily and continue his attack. Perhaps his peer and rival, Lew Tendler—one of the first great southpaws—gave Leonard respect for the southpaw's advantages. The drop shift itself is a slight withdrawing of the lead foot, before stepping forward with the rear foot into the new stance, in the style of a Muay Thai switch step. In the drop shift the weight is lowered and a left straight is leveled at the body of the opponent. It's not a tremendous punch (though any jab to the solar plexus is worth far more for its target than its strength) but an orthodox fighter performing the drop shift will be able to sneak his right foot outside of his opponent's left as he enters the southpaw stance, perfectly lining up the left high kick, a second left straight (a la Manny Pacquiao) or a continued combination from the new stance and a dominant angle.

Here T.J. Dillashaw uses the drop shift to set up a high kick, and cracks Joe Soto with a couple of punches off of it. Masato also used this shift to set up left high kicks in several of his K-1 bouts.

Georges St. Pierre's superman jab, which became a staple of his offence, was an application of the drop shift with a leap instead of the drop step.

Alistair Overeem's cheat punch is the next logical step on our path because it is another left straight punch into a southpaw stance. Though it is an up-jab / up-straight or whatever you would prefer to call it, and it is performed by first squaring the shoulders. By squaring the shoulders and hips, and then stepping into the southpaw stance, you can throw a left straight with power out of what would have been a jab—hence it is a 'cheat punch'.

Overeem uses this to enter clinches, to run into his knees, to score low kicks, to land a southpaw right hook, and for just about every other task you can think of. I'm ninety percent certain this is how he gets in and out of the shower. The genius of it is that it closes the gap and puts Overeem into a southpaw stance, from which he can land his left knee. That has always been Overeem's big money strike after all. Here he is cheat punching into the left knee against the great kickboxer Badr Hari of all people.

Even when he uses the inside slip to left hook counter that he knocked out Junior dos Santos with, he'll swing the right foot around into a short southie stance. Here you can see another reason why Overeem shifts so often, in MMA the opponent will almost always back straight up when attacked. For this reason, travelling combinations are as important as the classical boxing and kickboxing ones.

Similarly, Mauricio Rua has never excelled as a boxer with his wide swings, but his shifting left hook has more than made up for it in many places. Serving excellently to set up his low kicks against men who will retreat at the first sign of aggression and making him a perfect foil for Lyoto Machida: And of course most famously it knocked out Chuck Liddell:

If you're not reading this article from work (let's be honest though, you are) give the first couple of minutes of this video a watch for a compilation of some of Overeem's nicest cheat punches. Also check out his strange lunge punch, a shift in its own right and a great way to move onto the topic of right handed shifts.

The most common right handed shift is the Balmoral Special, and that isn't commonplace by any means. This beautiful little switch step hook was most famously utilized by Ray Sefo against Jerome Le Banner. This was back when Sefo was 'Sugarfoot', when he was one of the lighter heavyweights in K-1 and really moved like one. After a quick knockdown at the hands of K-1's Hercules, Sefo landed a nice backtracking low kick, led JLB around the ring and switch into a hook which put Le Banner's lights out.

You will remember Dillashaw landing the same against Barao, and Carlos Condit landed one just the other night against Robbie Lawler.

The switch step makes this a far more versatile movement than if one were to step with the hook, withdrawing the lead foot before shifting means that the fighter can adjust the length of his shift, which is important as this technique only really works at its best if it is used to hit a man as he is stepping towards you.

Punching with the same side of the body as you are stepping onto in your shift is exceptionally difficult and largely impractical—and yet it makes up the majority of attacks practiced against in traditional martial arts—but its certainly not impossible to pull it off. Here's Naseem Hamed stepping in with another of his unusual punches to jack back the head of the stunned Wilfredo Vasquez:

And shifts are far more versatile than that. A few good fighters have been able to throw right hands while shifting back into a southpaw stance under fire. James Toney, for instance, used this repeatedly against John Ruiz in between his usual shoulder rolls.

When you mix in kicks, shifts become even more effective. For instance, what I term the Schilling shift has been a staple of Joe Schilling's career. He'll come out with hard right push kicks, then start picking up the knee and stepping through with left straights.

Here's a Dominick Cruz staple: left high kick, place the foot down behind, then leap forward into an orthodox stance with the right hand. A double stance switch makes an opponent very uncomfortable making any assumptions about what is coming in future.

I've been harping on about shifts as underutilized since I began writing about the fight game. It's a boxing strategy and yet it is almost entirely absent from professional boxing. But with MMA being a constant arms race where everyone needs something new and no-one can learn everything we have seen shifts play key rolls in more fights over the last four years than perhaps they ever have in the upper echelons of boxing. If you still need more shifts, give this old drop shift video a watch and maybe we'll make a better one with the Ringcraft budget:

Robbie Lawler versus Carlos Condit: The Minefield of Judging a Fight

How Conor McGregor Killed the King