The Art of the Hockey Fight

As someone who learned about fighting from martial arts and learned about hockey from a pair of pacifistic parents who worshipped finesse players and tolerated only the cleanest of hits, I’ve spent most of my life struggling to understand hockey fights.

Where they belong in the greater context of sports is baffling at best. To invoke Mike Myer’s old Coffee Talk skits, they’re neither hockey nor fight. They happen on ice in hockey skates, but they’re not officially part of the game. They involve moves that can be used in actual fights, but they’re not sanctioned bouts. But then they’re not street fights, either. They exist somewhere in between the real world and the sporting one, somewhere on the periphery of both the sport they happen in and the sport they sort of mimic.

Beyond their place, I’ve also struggling to understand what makes them satisfying. The way I was raised leaves me seeing fights as a blight on the sacred sport of hockey. A boorish way to rope in unsophisticated fans and cater to the lowest common denominator who will never appreciate the finer, more important parts of the game like, say, the geometrical genius with which Jacques Plante guarded his crease.

The fight fan in me just finds them silly. Although a number of hockey players include martial arts in their cross-training now, adding lessons in Muay Thai to improve their balance on skates or MMA to keep their reflexes sharp, few manage to display anything in the way of halfway decent technique. The punches are mostly ill-timed and flailing. The footwork is about as good as you can expect for any form of combat executed almost literally on knife edges on a slippery surface. The gripping of hockey sweaters sometimes lends a nice one-stripe white belt Jiu-Jitsu charm to the proceedings, but anyone with any expectations of method or skill is bound to be disappointed.

My husband, a lifelong goalie with a vengeful streak, has spent years trying to convince me that I’m not watching the fights properly, that they’re part of a complex psychological game. Because he’s probably the closest thing that rec hockey will ever have to Sun Tzu, I’m inclined to trust his vision on this matter. I just can’t manage to share it when I actually watch games. 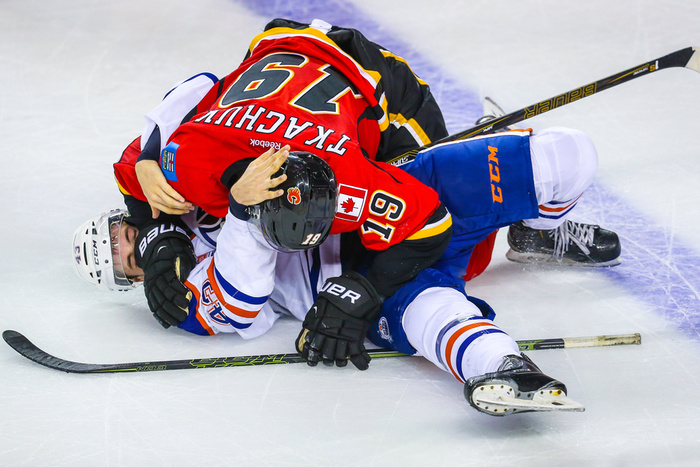 While I don’t find hockey fights entertaining, though, I am developing a taste for entertainment about fighting in hockey. And it’s through that kind of storytelling that I’m starting to be able to appreciate the parallels between the hockey enforcer and the martial artist.

Slap Shot might have treated the on-ice hijinks of the Hanson Brothers as a sideshow to exploit 40 years ago, but its cinematic heirs like Goon (and Goon: Last of the Enforcers, which comes out in theaters today) treat its fights and its fighters as a more central part of both the game and the film. When bouncer Doug Glatt (Seann William Scott) is plucked out of bar and placed on a minor league team in Goon, he faces a lot of the same challenges, life lessons and philosophical issues that you’d find in a Rocky or a Karate Kid. It might be more comic and crass in a Fubar-esque way – a hoser’s hero journey, if you will—but it’s still a movie about discipline, glory, fighting for yourself and your loved ones, and having the discipline and the skill to face down your enemy in the heat of a battle.

Those themes can also be found in the firsthand accounts of fighting from players themselves. Take former Detroit Red Wings player Kris Draper’s epic tale of the infamous March 26, 1997 brawl between the Red Wings and their mortal enemies, the Colorado Avalanche, that was published in The Player’s Tribune earlier this week.

Weaving together his team’s struggles, his personal underdog leanings—brought on by a childhood where he was underestimated and an NHL debut in which he was quite literally undervalued—and the hit from Avalanche player Claude Lemieux that broke both his face and his team’s spirit in Game 6 of the Western Conference finals the year before the brawl, Draper paints a complex mental picture of the need to prove oneself, the devastation of loss, and the quest for retribution and the restoration of honor. Set against that backdrop, Draper reflects on the brawl itself as a necessary moment of catharsis and a possible psychological advantage over the enemy, but he never lets it overshadow the importance of playing the game itself.

“Exactly 301 days after I had my face caved in, my teammates stood up for me. We settled it. But this is what a lot of people don’t remember: For the players on the ice, that night wasn’t just about the fight. That night was about proving that we could beat Colorado on the scoreboard,” he writes. “The brawl was one thing. But us winning that night changed everything. It gave us the belief that we could beat them in the playoffs. We knew we’d see them again in the Western Conference finals. We just knew.”

He’s similarly philosophical when it comes to discussing the role that fighting played in their Stanley Cup that win. And their subsequent Cup victories in 1998, 2002, and 2008. “Do we still win the Stanley Cup without that brawl?” Draper asks. “Maybe. But I know that it certainly didn’t hurt.”

The fight that he’s talking about is a spectacular orgy of largely unskilled violence, a barroom brawl exploding in the middle of a group of grown professionals on a solid block of ice. Unless you’re watching out of purely morbid fascination, digging up video of it on YouTube will be a disappointing viewing experience. There’s certainly nothing in the physical altercation itself that will speak to people who actually care about having any art in their martial arts. But something about its greater meaning just might speak to those same people. Hockey fighting might not be real fighting, but there is a genuine spiritual connection between the goon and the warrior.