The Ballad of Shayna Baszler 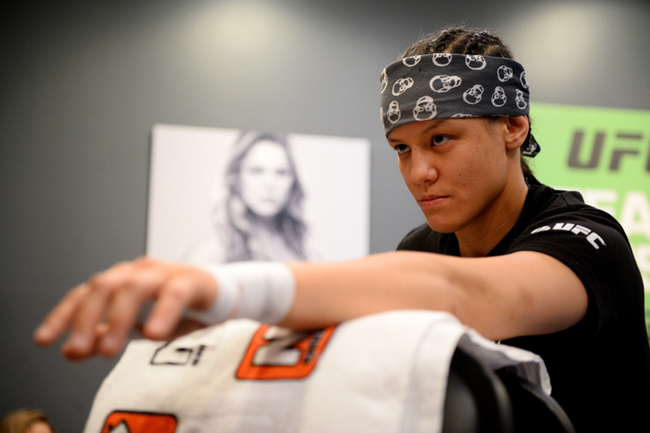 Remember that time when Chan Sung Jung finished Leonard Garcia with a twister? People were straight freaking out over the 2011 “Submission of the Year.” But before “The Korean Zombie” even entered the Octagon for his UFC debut against Garcia, Shayna Baszler, “The Queen of Spades,” became the first professional MMA fighter to pull off the highly technical move, also called a wrestling guillotine, in competition. Twice.

Don’t fret if you weren’t aware of this tidbit of mixed martial arts trivia. Baszler’s used to her accomplishments and accolades going unnoticed. For over a decade now, she’s been fighting an uphill battle on behalf of all female MMA competitors, sacrificing her life, her body, and a few quarts of blood to help the women’s game earn acceptance and gain notoriety.

A native of Sioux Falls, South Dakota, Baszler, 34, is one of the most accomplished women in mixed martial arts history. And with 15 wins (14 coming by way of submission) already under her Brazilian jiu jitsu brown belt, Baszler is set to make her promotional debut as part of the UFC 177 main card, scheduled to take on the undefeated Bethe Correia.

Baszler is one of the more animated and vocal fighters in the women’s bantamweight division. Promoting her brand with the shtick and antics often associated with professional wrestling, a sport of which she is an unabashed fan, Baszler taunts her opponents with playing cards, marking them as victims; a signature reminiscent of Heath Ledger’s turn as Joker in The Dark Knight.

Mixing theatrics with a refined catch-as-catch-can style (she is the only certified female catch wrestler in the United States), Baszler has made her way from the back alley regional shows of the Great Plains, to cable and network television as a part of the Strikeforce and Elite XC promotions, and eventually to headlining slots as a title challenger for the all-female Invicta FC. 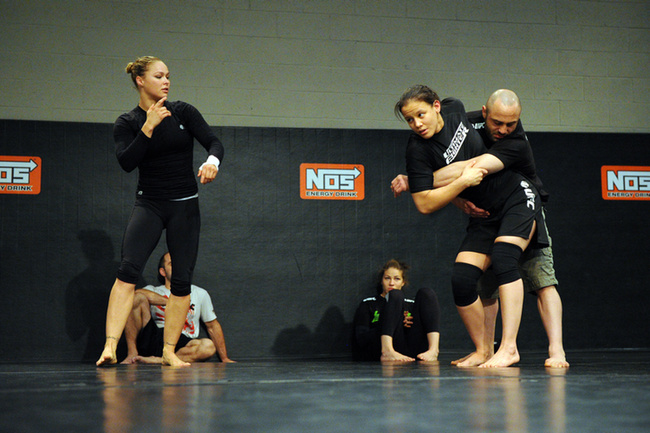 Already considered a star in women’s mixed martial arts, Baszler was then selected to compete on the eighteenth season of The Ultimate Fighter, favored by some to run the table in the UFC’s first female reality TV competition. But after an exhibition victory to gain entrance into the TUF house, Baszler found herself partnered to dance with eventual winner Juilianna Pena, a bigger, younger fighter, who earned the second round, rear-naked choke victory.

Baszler cried on television. As a women’s MMA pioneer and legacy athlete, she expected nothing less than the six-figure UFC contract.

Since the TUF loss; however, Baszler has been forced to sit on the sidelines, rehabbing a series of injuries. She’s taken up with Ronda Rousey’s posse, “The Four Horsewomen” (a group that includes fellow TUF-mate Jessamyn Duke and featherweight Marina Shafir), and continues to hone her catch wrestling skills with former heavyweight champion Josh Barnett. And now she’s finally on the verge of reaching the pinnacle of mixed martial arts.

But is it possible that her ascension to MMA’s biggest stage has come too late, and that her prime is already a thing of the past?

Even before her turn on TUF, Baszler dropped two-of-three contests, falling to Alexis Davis and Sarah McMann, the two most recent contenders to Ronda Rousey’s 135-pound title, women who lasted a combined 82 seconds against the champ. And before that pair of losses came similar results against Cristiane “Cyborg” and Sarah Kaufmann, two other elite WMMA competitors.

Are these defeats symptomatic of a fighter in decline, nearing her twilight? Or can Baszler resurrect her career inside the Octagon?

It’s been nearly 20 months since Baszler last saw live, pro action, and during that time, women’s MMA has found its way into the UFC, attracting a heap of fresh, young talent. Think about it, the last time Shayna Baszler fought a professional MMA match, Benson Henderson and Anderson Silva were UFC champions, and Georges St-Pierre still had two title defenses to go before the most non-committal retirement in professional sports.

Twenty months can be a lifetime in MMA, and for the women’s game, well, Ronda Rousey was still fighting under the Strikeforce banner the last time Baszler was active. In that span, Rousey has become one of the sport’s most recognizable stars, while every other WMMA athlete is merely treading water in her shark tank.

The time away could actually be a blessing for Baszler, who has been plagued by nagging ankle injuries in the last year, but it’s also possible that her delayed arrival in the Octagon has allowed WMMA’s new crop of athletes time to catch up in the skill departments.

Of course, if Baszler is able to string together a few wins, she may very well earn a title shot against her friend and teammate. But rather than thinking about the possibility of eventually fighting Rousey, Baszler is currently focused on Correia, a woman with whom she has been feuding since April.

Undefeated inside the Octagon, Correia most recently took a unanimous verdict against Duke, following up the win with an unmistakable hand gesture that took direct aim at Baszler and Rousey. And with a win, Correia will most likely catapult her way to the top of the standings and earn a title shot.

But so it goes for Shayna Baszler, who’s simply focusing on the present task, happy to finally have her day in the UFC. And after a decade spent clawing her way out of the alley, at times carrying the women’s game on her back, nothing is going to stop Baszler from getting in that Octagon.

WMMA's Past and Future: Will Gina Carano Return?