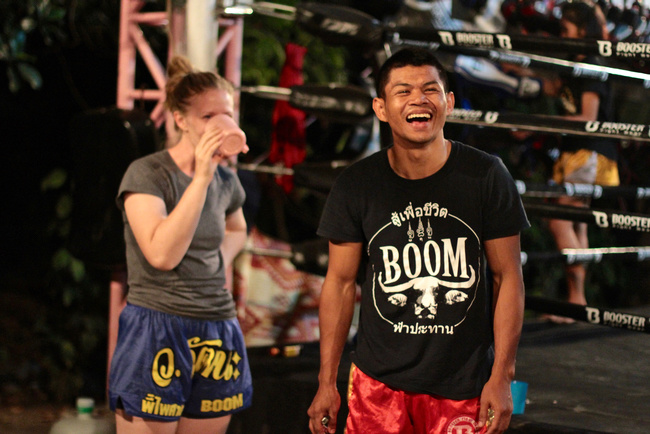 Boom Watthanaya had just arrived at his gym when the police showed up. The four officers, all in plainclothes, purposefully stepped out of the truck, ignoring the dust swirling behind them on the dirt road.

"This your gym?" the alpha officer said to Boom.

As a local who had lived the first two decades of his 30 years in that village, Boom was naturally wary of the police. A few of his brothers and many of his friends and relatives had been harassed or even beaten by the police. He'd seen police brutality firsthand—his brother had been arrested for murder and a false confession beaten out of him. Boom's brother was released only when another man confessed to the same crime.

The lead officer, the most stylish, confident of the bunch, marched up to Boom. "We hear you have a fight promotion coming up." 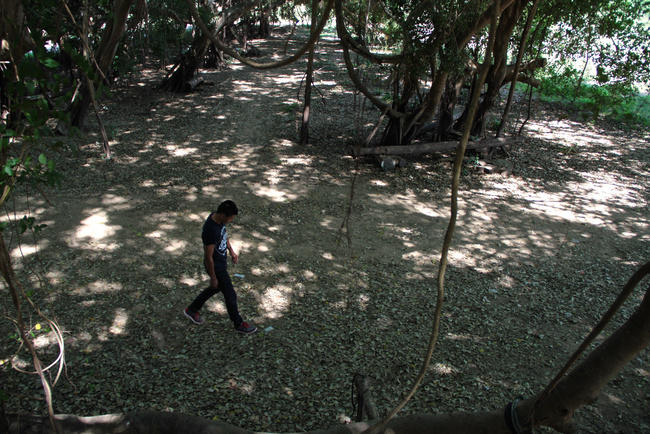 Boom confirmed the rumor. He and his Canadian wife Frances Watthanaya were promoting an upcoming fight event just a half mile away from the gym, in a dirt field in his home village of Krabuengnok, in Nakhon Ratchasima, Thailand. Boom and Frances had just opened Wor. Watthana a year before. This was their first fight promotion. The event was to be held in three days.

The four officers fanned out, three of them hanging back behind the lead officer. He wore Ray Ban Wayfarer sunglasses and a Linkin Park cap while the other three squinted in the afternoon sun.

"Why doesn't anyone at the police station know about this fight?" the officer said. "Why has no one come to ask for permits?" As if to suggest the gravity of this situation, the lead officer removed his cap and, without breaking eye contact with Boom, handed it off to his coatrack buddy behind him. He grilled Boom about having the proper paperwork, asked where his permits were. The other three officers chimed in their support—"Yeah," they'd say, whenever their leader made a point.

Boom knew they were there for a bribe. The whole scene screamed B-movie police shakedown. So he deflected, told them the truth, said he wasn't the official promoter. 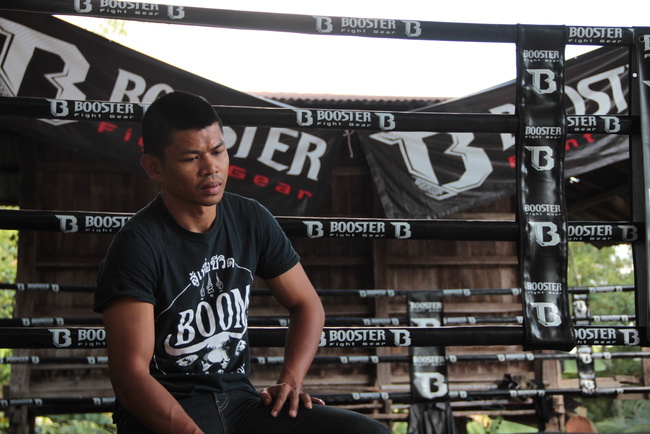 Legally, Boom couldn't be the promoter. He didn't have the proper licensure from the Sports Authority of Thailand yet. The actual promoter was someone from another province over, someone with thirty years of Muay Thai promoting experience.

"The promoter said he already got the permit," Boom told the police. "I don't know why he didn't tell you about the fight already."

"We'll check on that," the lead officer said. He asked Boom details—number of contenders, ticket price, projected ticket sales. "You got anyone for security?"

The lead officer scoffed, demanded they go to the police station and pay the "fee" to have them as security at their show.

"You have to have us there for security," he said, but Boom knew otherwise. There was no law requiring he hire those particular cops from that particular station. There were other security outfits available, like the local military or village police.

Then Boom thought to mention his connection at the police station. "I already spoke with Officer Breechaa about all this. The promoter has a permit for the show. And we will get our own security."

The four cops went silent at the mention of their higher-up's name. Boom had met Officer Breechaa last spring. The officer had personally congratulated him when Boom had won first place in a local marathon. They exchanged phone numbers and six months later, Boom called Breechaa to ask details of permits and security when he and his wife Frances started planning their first promotion.

After a moment, the lead cop said, "Okay, just make sure everything is sorted before the fight."

As if on cue, the hat-holding policeman handed the lead officer his Linkin Park cap. They stared Boom down as they turned to leave. Boom thanked them as politely as he could, relieved when they drove away.

Boom took his phone out and immediately called his wife. 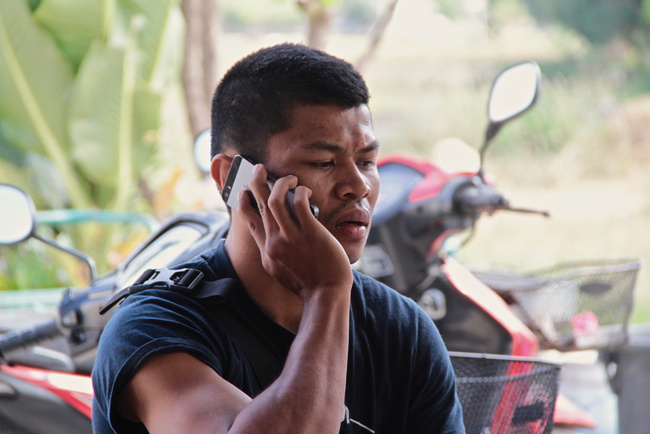 The date for the event had been confirmed five months before. Frances and Boom had been planning the actual event for the past six weeks. With Belgian company Booster Fight Gear sponsoring it, the event would be huge. For first-time promoters, a show this size was unprecedented.

Most promoters start by organizing free shows at temple fairs for gambling audiences with low expectations. With Frances and Boom charging 160 baht per ticket, however, the gamblers would expect a quality show. It's startlingly easy to spoil your name as a fight promoter. One bad fight on your card, one major mismatch, one thrown fight, those sorts of thing could ruin a promoter's reputation.

A promoter's license is required to put on a fight event, and neither Boom nor Frances had one. For someone like Boom, a relatively poor gym owner, it may take up to a year to be granted a license. For Frances, a promoter's license is not an option. Licenses are granted through the Sports Authority of Thailand; as a foreigner, Frances is ineligible. 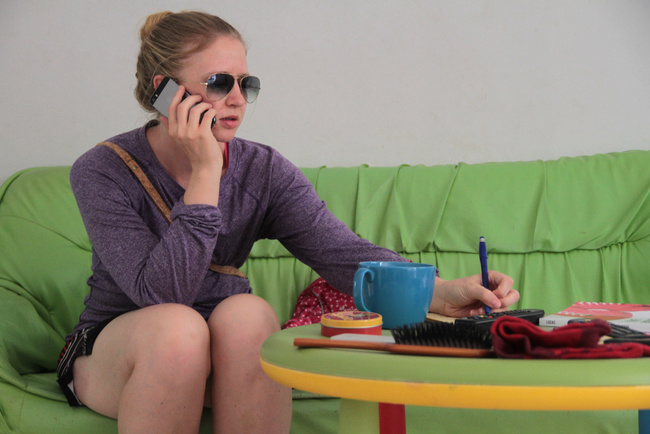 "I think they're trying to shake us down," Boom said to Frances over the phone. She wasn't surprised.

Sompon was their partner, a high-ranking official in the Thai military with a promoter's licenses and the power to put on the event. He'd been promoting Muay Thai for 30 years, was accustomed to dealing with cops like the ones who hassled Boom. It was supposed to be easy for Sompon to arrange all the necessary permits; he'd been in the game so long and had paid hundreds of bribes over the years. When Booster Fight Gear contacted Boom and Frances about putting on a promotion, Sompon was the man to whom they turned.

When Sompon called the police a few minutes after speaking with Frances, he introduced himself as a high-ranking military official, and confronted them about their treatment of Boom. The discomfort was audible in the policeman's voice. He started stuttering on the phone, made up an excuse that they were simply checking on the progress of the promotion. "We were just worried the foreigners won't have adequate facilities, like bathrooms or places to sit," the policeman said.

"That's not up to you; that's up to Mali," Sompon said, using Frances' Thai name. "You let her deal with that." 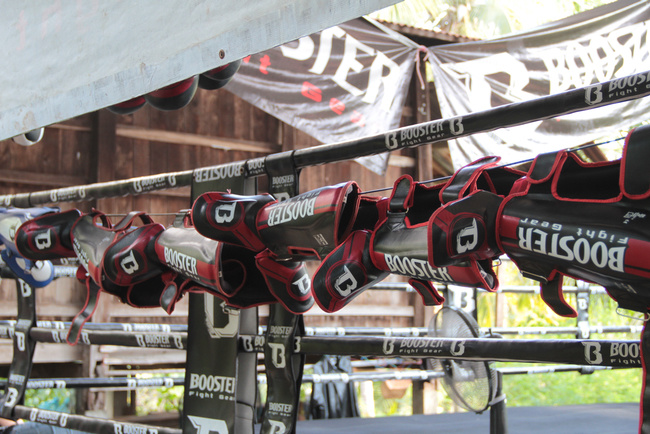 "I heard about what's going on," Breechaa said. "Tell your promoter to get his permit or this show can't happen."

"Don't worry, we have it all taken care of," Frances assured him.

"One more question. Are there many foreigners coming to this show?"

Frances smiled. She knew Officer Breechaa loved when foreigners visited his district. "Yes, there are lots of foreigners coming."

"Good. Now, will there be any from Syria?"

"Um… No," she said slowly. "I don't think anyone from Syria is coming."

By Thursday night, three days before the Sunday event, Frances and Boom still didn't have any permits in their hands. Sompon had collected the event permit from the Sports Authority, but the permits for gambling and noise were still missing. The man Sompong had hired for the job, a local gym owner named Dit, had put off picking up the permits until the last minute.

Boom and Frances had one business day in which to get all their permits in order. Without the permits for gambling and noise, there would be no fight. 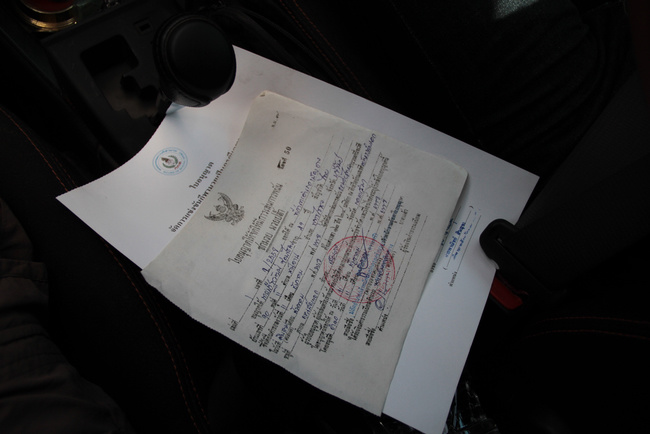 Friday morning, two days before the fight, Boom descended on the District Headquarters, a lone group of official-looking buildings surrounded by fields of farmland. The gambling and noise permits hadn't even been requested by Dit. Sompong was furious.

By noon, after a few phone calls, Dit applied for the gambling permit. He then dropped off both the gambling permit and promoter's permit from Sports Authority in Boom's village a few miles away. Boom rushed back from the District Office to a random motorcycle shop where Dit had decided to leave the permits.

A half hour later, Boom had the third and final permit in his hands. The last stop was the police station. 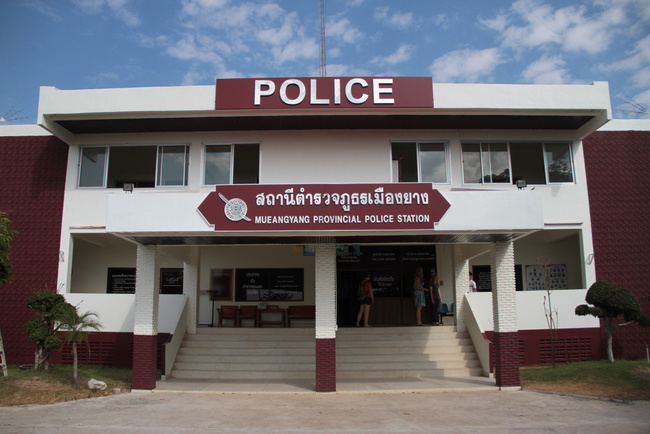 Boom was hesitant to hire officers for security from the same station he knew housed the four plainclothes officers who had come to the gym yesterday, but Sompong had advised him just to go with those same police. "It's not required, of course," Sompong had said, "but you're better off using them. They have their foot in the door, and they clearly want the money." As an unofficial duty, acting as security for a Muay Thai show is an under-the-table job, and the cops wanted the cash.

Boom didn't recognize two police officers on duty. One of them was excited to hear of his Muay Thai promotion. The other eyed him suspiciously.

Ever since opening their gym the year before, Frances and Boom had been getting used to slightly negative reactions from the police. Frances speculates the local police might think she and Boom are hiding something. After all, most promoters are rich or at least well connected, but Boom and Frances have a modest lifestyle and are just beginning to build their connections. The ability of a pair like Frances and Boom to put on a huge show worries and baffles the police. They have a hard time accepting that a huge company like Booster Fight Gear would completely finance a fight in dusty, dirt-roaded Krabuengnok Village. 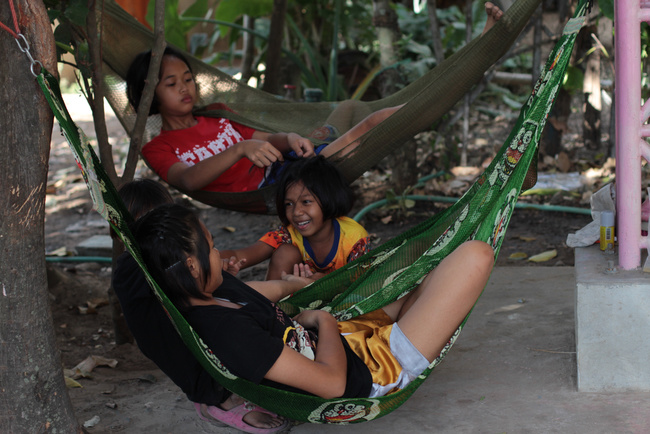 There's a good reason why Booster would promote a fight in such a place. Isaan is known for its talented, tough fighters, and Booster wants top prospects. They instructed Frances and Boom to bring in big local names, in hopes of scouting fighters for potential matches abroad. Booster also requested Frances and Boom devote half the card to newer-level child and teenage fights, which Frances thought was a great opportunity for the local kids, citing the exposure the contenders will get to other promoters and scouts, the free gear they'll receive, and the relatively high purses they'll earn.

Reluctantly, the sour-faced officer agreed with his enthusiastic counterpart to provide security for the event. Boom forced a smile, then broke into a natural grin. All the permits and security were finally in order. 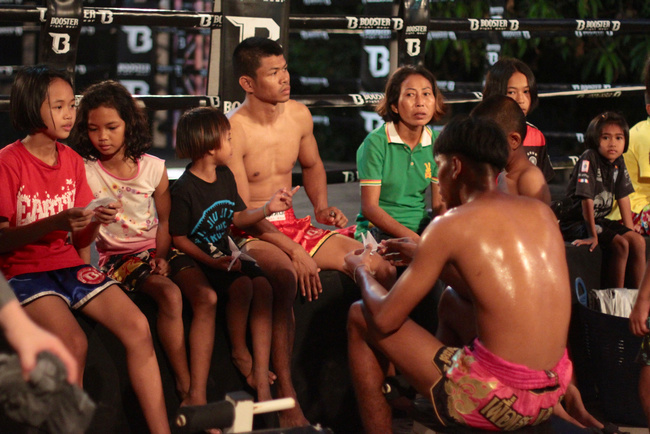 The kids started showing up at 4pm. Frances and Boom were both there to train them, though Frances spent much of the afternoon session on the phone arranging last-minute details of the fights.

At 4:30, Booster Fight Gear called. They wanted to know how everything was. Had everything been going smoothly? Had they run into any problems?

Frances smiled. "Everything is great!" she said. "It was very easy. Absolutely no problems at all."