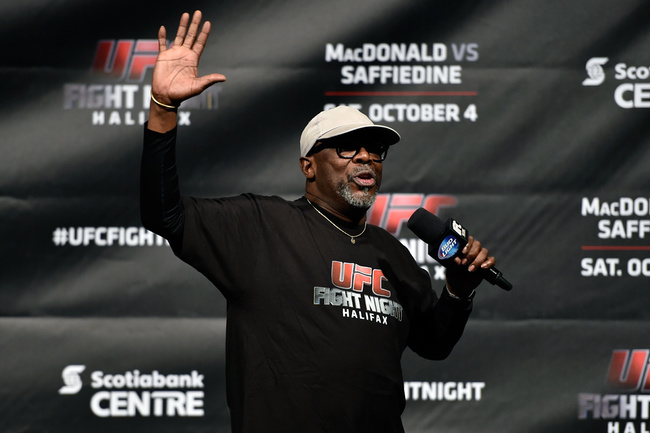 The Ultimate Fighting Championship has suffered one of its greatest losses yet: Burt Watson, the Babysitter to the Stars, confirmed via twitter on Tuesday, March 3rd, that he was no longer with the world’s premier mixed martial arts promotion. He provided no reason for leaving in his brief statement, but praised the 14 years he spent with the UFC, thanking Dana White, Lorenzo Fertitta and Donna Marcolini. Watson has not made any other statements.

The rumor of Burt Watson’s exit from the UFC that has had the internet abuzz for the past 48 hours began with reports that the beloved site coordinator left halfway through UFC 184. Supposedly, Burt Watson was involved in a vague incident surrounding one fighter’s weight cut with another unnamed UFC employee.

On Monday, MMAjunkie Radio’s John Morgan corroborated the alleged confrontation, but did not confirm an official exit by Watson. The UFC has yet to make a statement.

At last year’s Fighter’s Only World MMA Awards, Watson was honored for a lifetime of achievement in mixed martial arts. Coming from the world of boxing, his booming, energetic voice and famed “We rolling!” painted the backstages of countless UFC events with the perfect combination of excitement, familiarity, and adrenaline necessary to keep a fighter balanced before a fight. Burt Watson was responsible for complementing the difficult task of a fighter’s training team, taking the last few minutes before a fight to make sure that every fighter stepped out into the blinding lights and into the famous Octagon in their most serene, focused, and powerful mental state.

Ever-present from weigh-ins to the walkouts, Burt Watson is a beloved character by both fighters and fans, and his absence from the UFC’s events will surely leave a hole difficult to fill.

It is a sad day for mixed martial arts fans and twitter is bustling with goodbye notes from essentially everyone in the community. We have yet to hear from Burt, however, what exactly prompted this decision that caught the community by surprise, and we expect a thorough statement from the UFC soon.

What It's Like to Fight Your First UFC Fight