[Num, a native of southern Thailand, has been involved in Muay Thai for most of his life. He's been working in partnership with Somsak, the founder of Singpatong Gym, on the island of Phuket for the last 10 years. Now officially known as Singpatong-Sitnumnoi, the gym is home to two dozen young Thai fighters from the surrounding provinces.]

Most of our boys come from provinces in southern Thailand, places like Hat Yai, Trang, Phatthalung, and Nakhon Si Thammarat. A lot of them are from poor families who can't support them or give them any real opportunities to further their education or their potential boxing careers. Drugs are a big problem in some of their hometowns, so their parents think they'll have a better future here with us. There's no one typical way how we find them or how they find us. Each kid has a different story.

For example, there's this local fruit seller here in Patong where we always buy fruit. She's the reason we now have one of our boxers. She came to the gym one day and said, "I want you to take care of my nephew, here he is," and she pushed forward this little 13-year-old kid, said his name was Mok. He was from the mainland, Nakhon Si Thammarat Province. His family was so poor they couldn't even afford to buy school supplies for him to attend school. His aunt knew about our gym because she saw our boxers running by the fruit stand every day. She'd seen us take in boys and turn them into stadium fighters, give them a career.

That was two years ago. Now Mok is 15 and he's fighting all the time. He made it to Bangkok after all: he fought and won at Lumpinee just last week. 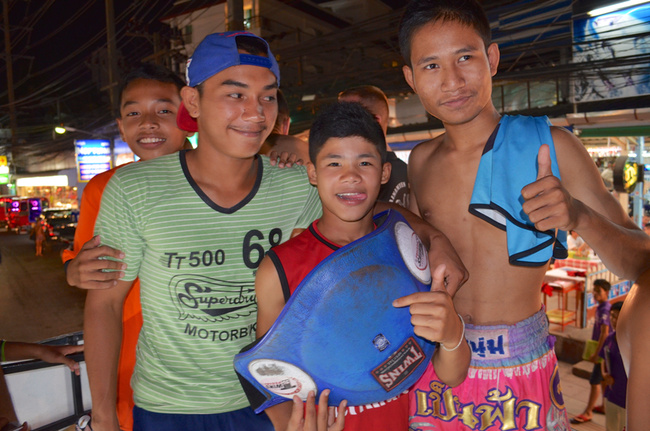 Mok and most of the other boys occasionally take trips back to their hometowns to visit, but they always seem pretty happy to come back to the gym. The boys all live and train together, so they become like brothers. It's a second family for them.

That being said, sometimes we have problems, just like in any family. Everything here is different than what the boys are used to at home, and it can take time to adjust. Our boys range in age from five up into their 20s, but it's the 14- to 19-year-olds who give us the most headaches. Since the gym is like a family, the responsibility falls on us to act as parents and discipline them. Their real parents trust us to take care of them and enforce rules.

Mostly we have problems with the teenage boxers running around with girls. It's easy for them to meet Thai girls their age and talk to them through Facebook or on their phones. The boxers are popular with the girls around town and at school, so there's never a shortage of potential problems. We don't allow any of our fighters under the age of 20 to date, but they're teenagers, so of course some of them are going to push the boundaries. 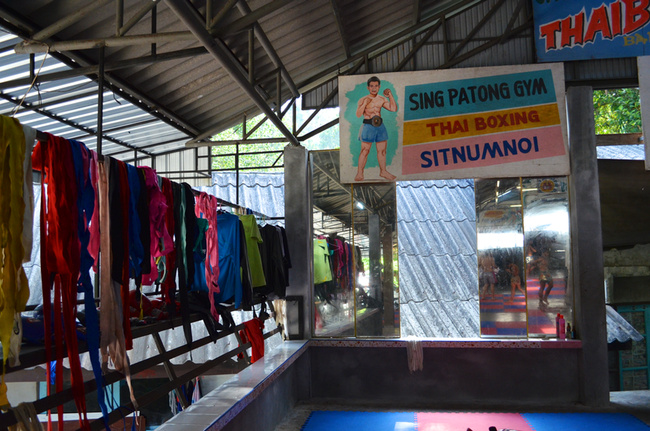 Sometimes the boys try to sneak out in secret to meet girls. When we catch them, we sit them down and have a little discussion. We might also call their parents; you should see some of these tough boxers just break down in tears when they get on the phone with their angry parents. That usually solves the problem. We also have a wooden paddle in the gym as a last resort. I'm happy to report it's never gotten bad enough that we've had to send any of them away.

The parents would be furious with the boys if they got themselves kicked out. They're thankful that we're caring for their sons, helping their sons receive an education and develop careers. My wife Michelle helps the boys deposit their fight earnings in their own personal bank accounts. She tries to show them how to manage their money. She'll take them to the supermarket and teach them about budgeting. They live at the gym for free, but we give them a little bit out of their accounts every so often for whatever extras they want. 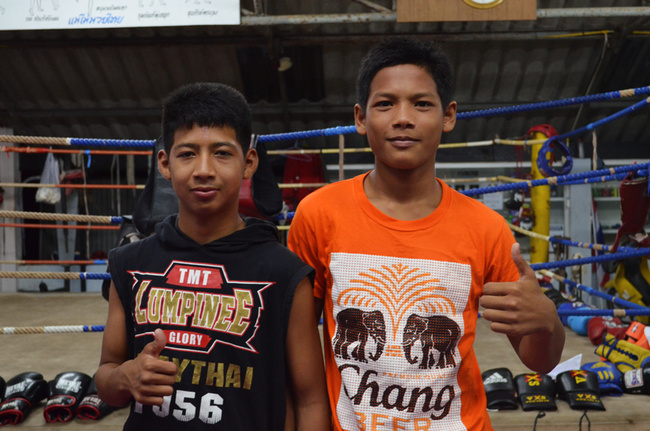 It takes a while for some of the boys to adjust to life here at the gym. We have a deaf fighter named Lib. Well, he's not totally deaf, just extremely hard of hearing. His family knew of my gym because they're from the same village as Pentai, one of our champion fighters. Lib was 11 when he arrived, and he cried all the time. He didn't want to train, just wanted to stay in the boys' room and cry.

Lib fought only once before coming here, and he lost. His technique when he arrived was terrible, basically nonexistent. He couldn't have been a fighter if he'd stayed in his hometown. He had no future there; he came from a community full of drug users, yaba addiction… It was bad.

The kid could barely even speak when he first showed up. He was almost deaf, and basically mute too. The trainers try to explain technique to him, but he couldn't understand their words. No wonder he cried all the time.

Eventually, though, he started to catch on with the training, and open up a bit around the gym. The other boys played with him and the trainers worked with him, tried to show him technique in a way he'd understand. 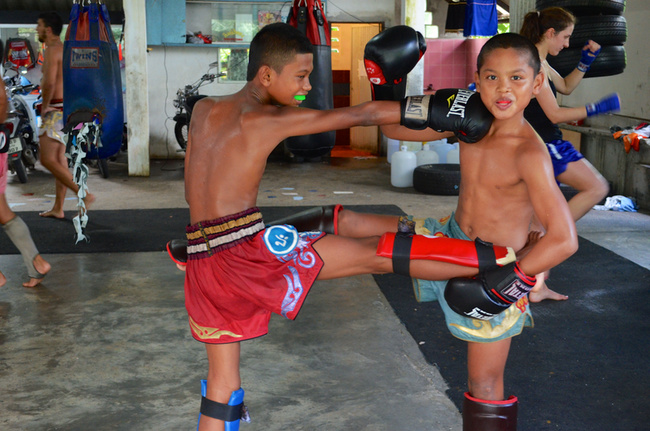 Now it's four years later and Lib is 15 years old. It's like night and day, compared to when he first arrived. He can talk much better now, even on the telephone! He's been winning the majority of his fights in the local circuit and is scheduled to start fighting in Bangkok very soon. I would go so far as to say that he could become a champion in the future. The way he fights, you can tell he's very smart—he sees things in the ring that other fighters don't notice. This is the same kid who had no technique, no future in fighting when he first came here, a kid who just cried in his room all day. Now he's one of our best younger fighters, and he says he doesn't want to go home anymore, says he likes staying at the gym. He gets excited when his family comes to visit, though. He still loves seeing them.

Lib's development as a fighter has been outstanding, but not every Thai boy here is destined to become an excellent fighter. Maybe only three or four of the boys at Singpatong now are on the path of becoming top fighters in any national stadium. The reason I take in so many young Thai fighters is because I love Muay Thai, I've been given so much through it, and I want to use it to give back in return. My way of doing that is to help better the lives of kids from poor areas of my country. It's not always easy to take care of 24 kids from different backgrounds, but the key is for them to feel like the gym is their family. 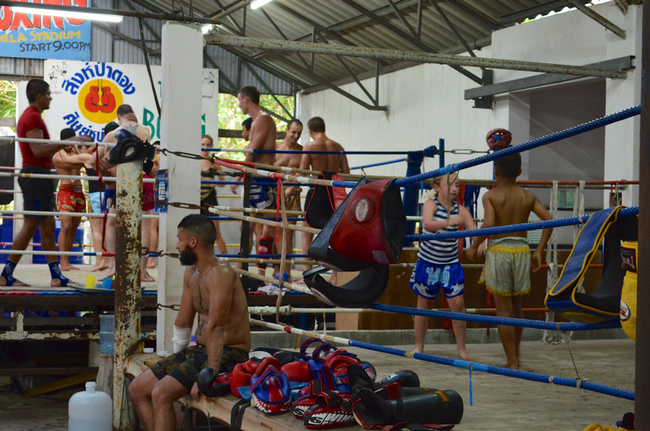 A lot of people want to open gyms and raise up Thai fighters, like what we've managed to do at Singpatong. I think this is a good thing, as it gives the boys a home and a potential career. It's very difficult, though, to develop a strong gym with a good name. This is something that requires a real investment of your time, energy, and heart. You have to be completely dedicated.

It costs a lot to run a gym with so many resident fighters. Training foreigners helps to offset the cost, but we also do the same as a lot of gyms: having sponsors for the fighters. Most of our sponsors are close friends of the gym. It's not necessarily about donating money, but more about supporting all the kids, like donating school supplies, boxing equipment, even just bags of rice to feed them all. The boxers are registered with the Sports Authority of Thailand, so we fill out the paperwork with the sponsor's chosen name, and mail it in for the official registration.

The sponsors get to pick the fighters' names, so some of the boys end up with interesting fight surnames. For example, my wife Michelle is a lawyer and she sponsors a few fighters, so their fight surnames are "Tanaimichelle," (Lawyer Michelle). Some of our boys are sponsored by local businesses, so we've got kids with fight surnames like Awesomevillas and Thephuketnews.

This is pretty common around Thailand, sponsoring fighters as a way to advertise your business. Even big politicians will advertise through famous boxers' fight names. The famous champion Sam-A Kaiyanghadao is a prime example: his fight surname means "Five Star Grilled Chicken." 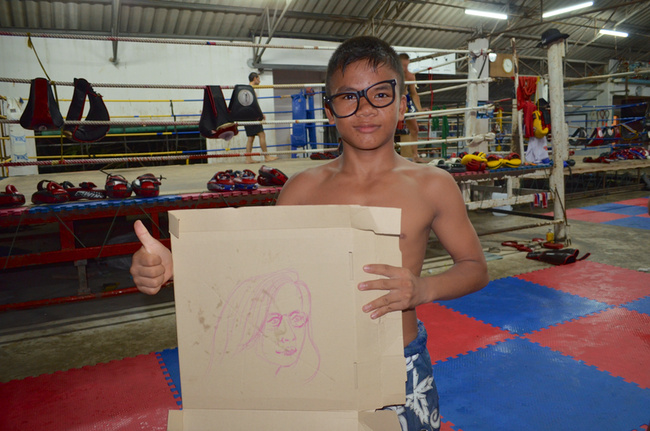 Sometimes people ask me for advice about starting their own Muay Thai gym, how they can make a successful business out of it. My advice is to do some soul-searching, ask yourself why you really want to start a Muay Thai gym. If it's just for money, it won't work. You'll short-change yourself, your fighters, everyone. To be truly successful in Muay Thai, you have to start from passion, start from your love of Muay Thai, and then it will bring you business later. If you're going to open a gym, do it because you love Muay Thai, not because you love money.

I've been fortunate in that I'm now able to give back to the community, to the young Thai fighters, what I was given through Muay Thai. I have a famous gym with a good name because of Muay Thai's presence in my life. Without it, I don't know what I'd be doing. Now I'm in a place where I can help others better their lives through Muay Thai as well.