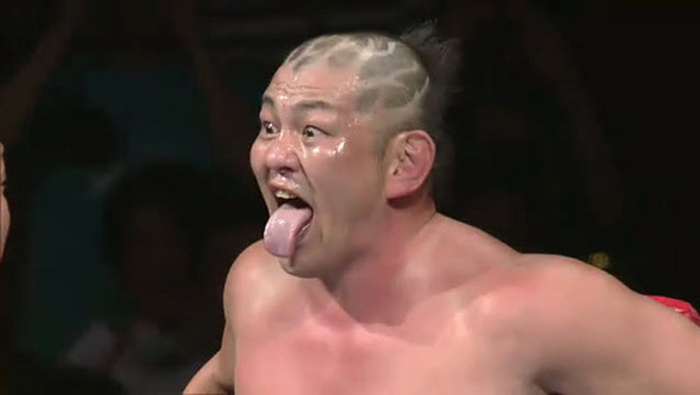 In 2016 it is a rare weekend which does not see a major fight taking place. Perhaps it is a little whiny and entitled of me to be disappointed by that when just a few years back we had just a couple of real events a month, but my weekends need fights! But where five or six years ago you would be constrained to visiting shady websites or looking up clips of PRIDE FC on YouTube with awful, royalty free music played over the top, today you are spoilt for choice with on demand fights. Between companies like GLORY sharing their fights on YouTube and the UFC's terrific Fight Pass service acquiring the rights to the libraries of shows as diverse as the Eddie Bravo Invitational and Invicta FC, it is a tremendous time to be a fight fan with a desk job and an inattentive manager.

This week I have mainly been reveling in the fact that Fight Pass has finally gotten around to uploading some of the classic Pancrase fights to which Bas Rutten does not own the rights. As much as I love El Guapo, Fight Pass were teasing Pancrase for months and only putting up Rutten's bouts. The reason I was looking forward to this so much was mainly the peculiar catch wrestling chops of one of Pancrase's founders, Minoru Suzuki.

If you have heard that name before, it might well be due to Suzuki's lengthy and respected career as a professional wrestler. A smug and nasty heel—or perhaps 'anti-face' as he is still universally beloved by Japanese crowds—Suzuki's nickname apparently means 'The Man with the Worst Personality in the World'. If you followed the career of A. J. Styles through his globe trotting adventures as he picked up accolades from wrestling critics left, right and center, you will recall that Suzuki put on Wrestling Observer's 2014 match of the year against Styles at the age of forty-five. A student of the legendary Karl Gotch (from whom he took his finishing move, the cradle piledriver) and Yoshiaki Fujiwara, Suzuki is one of the old school and still a dab hand in the ring.

The Gotch piledriver as performed by Suzuki.

Karl Gotch produced great professional wrestlers but he was also an experienced catch wrestler, spending a good deal of time at the Mecca of catch-as-catch-can, Wigan's Snake Pit. His students—Fujiwara, Antonio Inoki, Masakatsu Funaki, Minoru Suzuki and so on—were taught to put on a show, but also to wrestle properly. In fact it was a shoot style match between Funaki and Suzuki which convinced the two that there was a market in Japan for real matches, and so the two broke away and formed their own 'Hybrid Wrestling' organization, Pancrase.

Pancrase's old events make for a fascinating snap shot of history and of a style of MMA, and especially grappling, which is completely removed from today's. When watching Pancrase you are aware that there is a lot of space and freedom of movement for both men, and that guard passing and guard maintenance is incredibly basic. This is because most of the competitors only had experience in a catch style of wrestling, which was obviously built around rules which place primary importance upon the pin.

What makes Suzuki's first run so fun to watch is that he had an edge in skill on many of the other competitors in the early Pancrase bouts. Many of them were pro wrestlers, but not in the same way as Suzuki and Funaki, who had legitimate grappling chops. In his first streak of victories in Pancrase, Suzuki was effectively Royce Gracie in the early UFC tournaments. He knew what he was doing and many of the others did not. Yet where Gracie got on with it, Suzuki seemed to relish it and to play the heel in a real fight.

Get a load of the smirk.

At five foot ten and under two hundred pounds, Suzuki was often the smaller man in his bouts but almost always found himself in top position and from there he had some of the most interesting offence in the game. From his pairing of Half Nelsons and Quarter Nelsons with armbar attempts...

To his pairing of armbars and a brutal crooked head scissors. In his second bout, against Vernon 'Tiger' White, Suzuki demonstrated the power of this hold in forcing the tap from White.

All very wide, spacious movements when you look at them through the lens of modern grappling but neat techniques nonetheless and combinations which could be tightened up by a modern day grappler for use against opponents who understand how to move their hips and constantly be shrimping and bridging to take advantage of any space given to them.

The same head scissors was on show in many of Suzuki's matches. Though he didn't manage to pick up another finish with it, it did force movement and expose openings. Against Thomas Puckett, who had the misfortune of making his debut against Suzuki, the catch wrestler demonstrated all of his chops effortlessly. Here's a beautiful cross knee tap (or sotomuso if you prefer sumo terminology) against Puckett who looks completely perplexed in the clinch.

One feature of Suzuki's game which made him a joy to watch was his constant and flowing movement on the ground. It wasn't always productive, but if you like your grapplers active Suzuki is great fun.

Fluidity was what marked Suzuki out from the other solid grapplers of Pancrase such as the methodical Masakatsu Funaki and the forceful Ken Shamrock. He utilized the same few attacks but in flowing chains which will catch the eye of even the modern grappler. For instance, like any Fujiwara student he utilized the double wrist lock and made sure to apply it on the hand rather than the wrist when possible. Notice here, in Suzuki's third match, that as he tears his opponent's arm clear to apply the kimura or, as it appears, the straight arm lock, he has the wrist bent back and is controlling the meat of the hand rather than the wrist itself.

This is something you will hear catch purists harp on about and there is a good deal of value to it if you can accomplish this grip on a resisting opponent. It is the preferred method of Suzuki's long time mentor, Fujiwara. Here is Fujiwara demonstrating the grip in one of his instructional tapes. 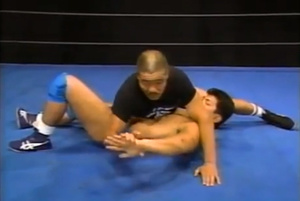 Now returning to the flowing magic of Suzuki at his best, check out this combination. The popping of the arm over the head into the figure four grip that Braulio Estima loves, faking a transition to an armbar or the back, digging the right underhook through and returning to the head scissors, and finally finishing with the armbar. Maybe not against the best grappler in the world, but a lovely, flowing sequence of attacks nonetheless.

Suzuki's best fight was probably his first against Ken Shamrock. Shamrock was relatively new to submissions but had been a great wrestler and was one of the largest, strongest men in Pancrase. In his first match in Pancrase he had mounted and arm triangle choked Masakatsu Funaki, the co-founder of the organization and heavy favourite. Shamrock ran through three more men, submitting each, before entering the first UFC tournament and getting caught in a choke by Royce Gracie. He rebounded by easily heel hooking another fighter in Pancrase and then he met the 4-0 Suzuki. After fighting on defence for the entire bout against the stronger, harder hitting and all around scary Shamrock, Suzuki found himself in an awkward leg entanglement (before the days of the fifty / fifty and ashi-garami being commonly understood as positions) and heel hooked Shamrock.  As Shamrock began to turn with the hold, Suzuki transitioned into a knee bar and extended his hips to ruin Shamrock's leg. Shamrock was able to reach the ropes and gain a rope break—one of the other brilliantly fun though perhaps not entirely fair aspects of early Pancrase—yet was unable to continue.

Interestingly, Fight Pass' version of the fight is shot from a different angle to this one.

The validity of the heel hook to knee bar progression is not up for debate because it has been a staple attack of Rousimar Palhares for years. Most memorably he made a horrible mess of David Avellan's leg with this one.

Suzuki bested Shamrock a second time, making him the only man to do so in Pancrase, but that fight is widely thought to have been a work. Watching the bout you can clearly see a lighter, more flowing type of grappling and Shamrock seems to theatrically rolled out of the same heel hook and into the kneebar once again.

More of Suzuki's catch wrestling quirks can be seen in all of his matches available on Fight Pass thus far. Against Takaku Fuke, Suzuki seemed particularly mean spirited. After Fuke successfully caught a hold of one of Suzuki's boots on a head scissor, attempt, Suzuki decided to perform what is now a Josh Barnett favorite, the knee ride across the neck.

Speaking of Barnett, here is the modern catch master discussing his time training with Suzuki:

When Suzuki mounted Fuke, and Fuke attempted to bring his arms back to his body, Suzuki pinned one, weaved his arm through behind Fuke's head and into his armpit, and began walking around to apply the stockade, another nasty neck crank. Fuke wriggled free but Suzuki immediately began working a figure four on an arm.

When Suzuki got Fuke's back and forced him belly down, he even tried to camel clutch his man.

While Suzuki had hard losses to Bas Rutten and Masakatsu Funaki, and continued to suffer injuries as his record became more checkered, he was simply wonderful to watch. Spinning out of mount or side control to dive after his opponents' legs, looking for the head scissors from everywhere, when Bas Rutten struck him in the back of the head on the ground and apologized, Suzuki told Rutten it was okay before head butting him with a grin. The guy was a character and it comes through as much in the grappling he did in real fights as it does in his professional wrestling to this day. As he found less success in the ring Suzuki began to focus more on training up fighters at P's Lab, the Pancrase gym in Yokohama and has continued to serve as an invaluable influence on both Japanese MMA and professional wrestling.

You could do far worse this Friday than to watch Minoru Suzuki's initial streak of wins in the Pancrase's very early days.