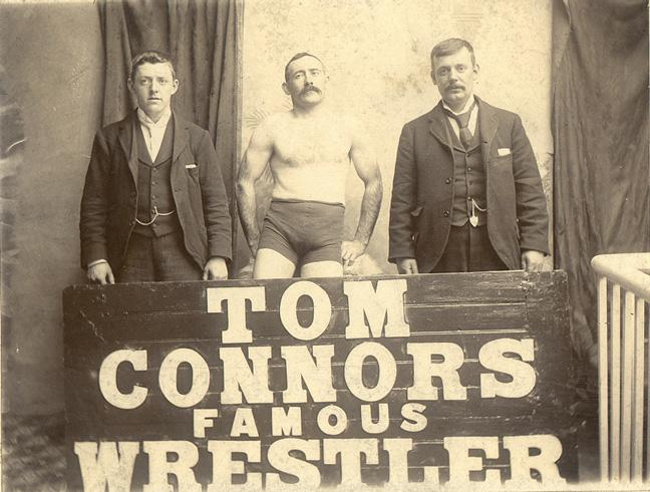 The bulldog choke is a technique that, though historically rare, was twice effective in UFC 181. Uriah Faber and Raquel Pennington both scored submission wins with the technique, Pennington even putting her opponent to sleep, proving that the technique is both effective and ascetically pleasing. The bulldog choke looks like the hybrid of a pro-wrestling headlock and a rear naked choke. It defies the time honored adage of “first position then submission”, the idea that a grappler should have relative control of the opponent’s body, before attempting to end the fight with a submission.

Unlike a proper rear naked choke, the bulldog choke doesn’t feature any such body control; rather it follows an old wrestling adage: where the head goes the body will follow. This is best exemplified by both Raquel Pennington’s win over Ashlee Evans-Smith and Carlos Newton’s win over Pat Miletech at UFC 31. In these two examples, the one defending the bulldog choke is forced to fight against the constricting pressure of the choke and the immobilizing pressure of his opponent’s body weight on his neck, pulling and driving him to the ground. Unlike, a rear naked choke, where the defender could conceivably defend by turning into the attacker, the defender of the bulldog choke is not capable of turning in any direction, only down and out.

The bulldog choke, in the words of Rener Gracie, is a “glorified head lock”.  In a headlock, if the defender turns his face into the attacker, his throat is protected, making the choke non-existent; but if the defender looks away from the attacker, as in the case of Uriah Faber vs Francisco Rivera, his neck is exposed thus turning the headlock into a bulldog choke. Head locks are precarious in real fighting for they give the defender an opportunity to take the attacker’s back. However, what’s interesting about the bulldog choke is that it predates MMA and is the possible ancestor for the theatrical pro-wrestling headlock. 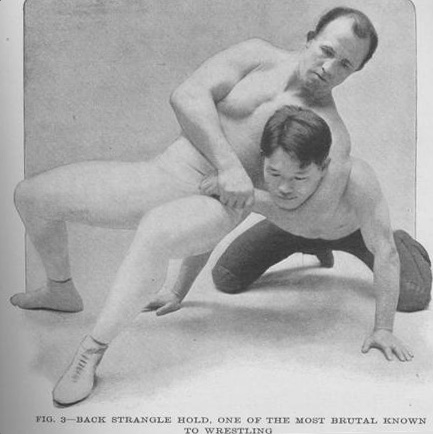 Because there are only so many ways the human body can bend, the bulldog choke has probably been invented and reinvented countless times in China, India, Japan, Burma, Egypt and Greece. It also existed in catch-as-catch-can. Catch-as-catch-can, known now as catch wrestling, is the ancestor art of both Olympic freestyle wrestling and theatrical pro-wrestling. Catch wrestling seems to be descended from Lancashire wrestling and the Irish style of Collar and Elbow wrestling; these styles were brought to North America by the British, giving birth to catch-as-catch-can, the martial art of George Washington, Abraham Lincoln and Theodore Roosevelt. As catch wrestling morphed into Olympic freestyle and pro-wrestling theatre, the old style almost became extinct. However, the old techniques were kept alive in Japan by the efforts of principally two men: Karl Gotch and Billy Robinson, both of whom were Snake Pit alumni.

The Snake Pit was a hardcore school of both pro-wrestling and legitimate submission wrestling, in Wigan, England. It was Robinson and Gotch who passed on the style to a handful of pro-wrestling zealots, who later became the godfathers of Japanese MMA. Between the two of them, Karl Gotch and Billy Robinson are credited with teaching the likes of Satoru Sayama, Yoshiaki Fujiwara, Antonio Inoki, Kazushi Sakuraba and Josh Barnett. Karl Gotch disciple, Yoshiaki Fujiwara, trained Masakatsu Funaki who in turn trained Ken Shamrock. Shamrock was billed in UFC 1 as a “shoot fighter”. The “shoot” in shoot fighting is pro-wrestling slang for a legitimate contest, anything that is real or unscripted. In North America, the style would later be known, by insiders, as “hooking”, being kept on life support by only a handful of masters. One such master was “Judo” Gene LeBell.

Before he ever donned a judo uniform, Gene LeBell received his first lessons in submission wrestling through personal instruction from Ed “Strangler” Lewis. Lewis was part of a transitional generation in professional wrestling, were theatrical, read fake, matches were performed by wrestlers who still knew how to legitimately submit people. Lewis was part of a vanishing breed known as “hookers”. Hookers were valued by promoters for their legitimate submission skills, forcing their co-workers to follow the script should they try to deviate from the predetermined ending. Such a double cross happened in Japan, when a confused Masahiko Kimura, yes, the same Kimura that beat Helio Gracie, was beaten down by Rikizodan, in what was supposed to be a fake match. Rikizodan was later killed by the Yakuza for this dishonorable deed.

When we look at old catch wrestling photos, and entertainment matches by Ed “Strangler” Lewis, several things stand out. First, the bulldog choke already existed, as early as one hundred years ago, in the form of a “strangle hold from the front”. Second, the bulldog choke is, as Rener Gracie says, a glorified headlock. In his wrestling shows, Lewis used it as both a set up for a throw and a failed submission. Since the headlock exposes the attacker to position loss in real grappling, the headlock was probably invented as a theatrically safe version of the bulldog choke. This is interesting when looking at Ronda Rousey. One can arguably draw an instructor lineage from Ed “Strangler” Lewis to Gene LeBell to Ronda Rousey; and it’s curious that she has had great success in MMA, using the same headlock takedown Lewis used in his theatrical matches. Of course, this might be mere coincidence, as outsiders can only speculate about what Rousey has learned from her “Uncle Gene”. Nevertheless, the thought that Rousey has her grandfather Lewis’s headlock piques the imagination and shows that there isn’t really anything new, under the sun.