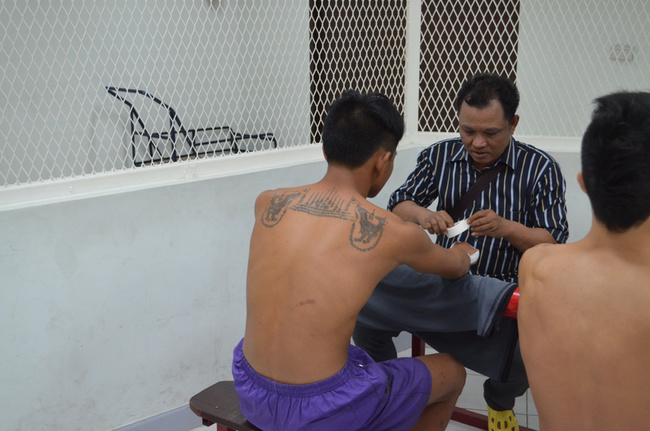 [The first time I met Ya Kiatpetch, I mistook him for a doctor. He dumped out the contents of a couple plastic bags—needles, cotton swabs, IV bags—onto the hotel room table. Two teenage fighters, Tiger and Teep, were lying on the twin bed in a hotel around the corner from Lumpinee Stadium in Bangkok. They'd been cutting weight for the last few days and Ya had arrived to rehydrate them in time for their imminent fights. I watched as his bare, gloveless hands deftly inserted needles under the boys' skin. He hooked the boys to IV drips, the bags of solution rigged up by shoelaces to the curtain rod above the bed.

I later learned he wasn't a doctor. He'd learned the art of IVs and fighter rehydration from his lifetime in Muay Thai. Like many other middle-aged Thai men in the business of Muay Thai, Ya spent his early years as a fighter. He took up boxing at age 10 in his native Isaan region and kept fighting until his mid-20s as a contracted fighter under the famous Petchyindee Gym in Bangkok.

Now 50 years old, Ya is a scout for various promotions and gyms, primarily the powerful Kiatpetch promotion. He has recently opened his own gym, also named Ya Kiatpetch, in Buriram Province near his home.] 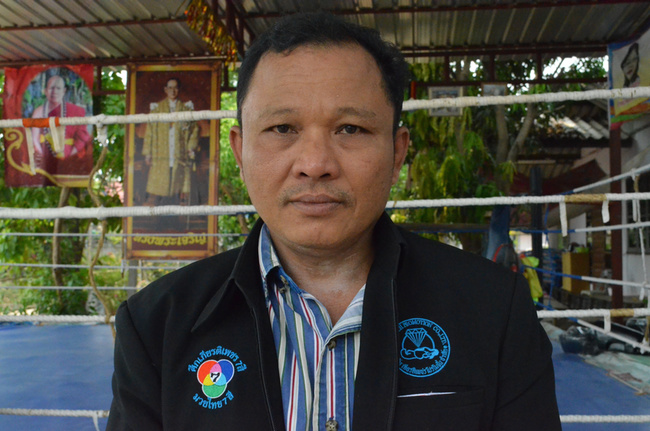 I've been a scout for 25 years. Even when I was a taxi driver, I was a scout. I drove a taxi from my mid-20s to my mid-30s, started driving after I retired from fighting. I'd work all day or all night driving the taxi, but after my driving shifts were over, I'd be matching fighters, helping promoters, building connections.

You go everywhere when you're a scout, wherever your boss tells you to go. I've scouted all over the south, all over Isaan, everywhere. I go on scouting trips an average of once a month, mostly around Isaan now. I'm in Bangkok every other week. Gyms will call me up and say, "Hey, come look at our fighter. Can you help get him a fight in Lumpinee?" I'm looking to put fighters in the big arenas of Bangkok. It's something the gyms out in the countryside want for their fighters. See, if a fighter isn't signed but he shows a lot of talent when he fights in Bangkok, then he can get seen during the fight by other scouts working for big Bangkok gyms.

Not all scouts are the same. Most of them work for promotions; they don't go out looking for fighters for specific gyms. For me, I mainly scout for the Kiatpetch promotion. 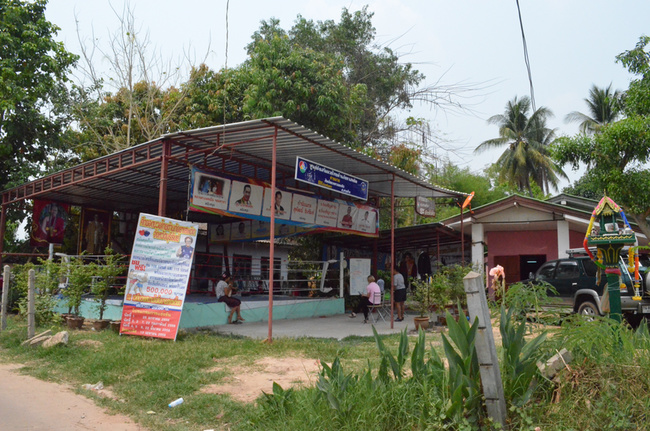 It's up to me as a scout to determine which fighters to recommend, and that can be challenging. I look for all kinds of things in my fighters. You always want someone well-rounded, but really what you're looking for is someone who is loyal and will fight hard, so you won't lose face. I don't want someone who would throw a fight. I look for fighters who take care of themselves. They have to know how to sleep—rest is very important—so they can focus and work hard. I'd argue that's more important than technical skills when it comes to what makes a fighter great. Also, you have to make sure the fighter has a proper team around him, people who train him well, help him make weight, keep him on schedule.

When I find a fighter I like, I'll put him on a small show, like TGN, which is a small broadcast out of Lumpinee. If he performs well, maybe I'll put him on Channel 7 next. Then bigger shows at Lumpinee. I work mostly with Lumpinee and Channel 7, sometimes Rajadamnern too.

Scouting is a job, it's definitely work, but at this point in my life it's just a status job to keep me going. I don't really make money off it. It pays decently, but all my salary goes back into my gym here in Buriram [a province in Isaan]. I'd be rich if I didn't have a gym!

I send about 10 fighters a month to Bangkok. They all come from various gyms, not just mine. I take a cut of their purse, a finder's fee, and sometimes I make extra cornering. At the old Lumpinee, I used to get a monthly salary, but the new Lumpinee… Well, business hasn't been very good there lately so they don't give me a salary.

It's a good job for sure. It's stable and respectable. My boss takes good care of me as an employee and it's a very professional working relationship we have so I'm pretty happy with it. Especially now that I have my own gym. 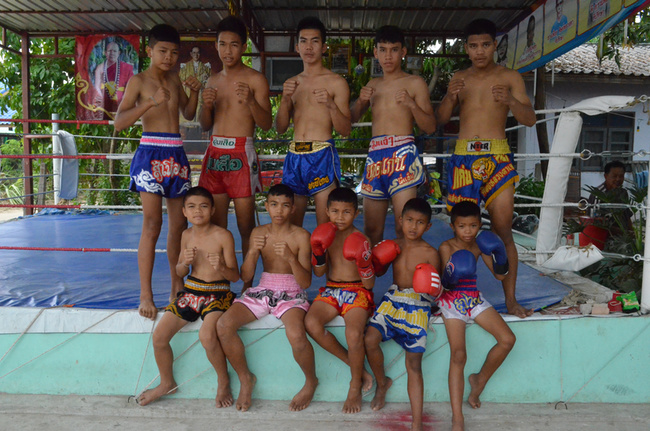 Owning a gym isn't new for me. I started my old gym Sak Buriram about 10 years ago with a few other people, and it just grew and grew. One of the reasons I started this new gym, Ya Kiatpetch, was because Sak Buriram was getting overcrowded. A lot of the Sak Buriram fighters had to sleep in the ring because there weren't enough rooms. I had a lot of fighters in my charge and so I just decided to branch out and start something new. I have about a dozen fighters here now at Ya Kiatpetch; they're between 11 and 24 years old. They're all from around here in Isaan. I'd prefer to keep them here rather than sell them to Bangkok gyms because they're like family. I bring them to fight in Bangkok but they're still Ya Kiatpetch fighters. It's easier to take care of the fighters in a place like this, always easier in a small gym.

Most of the fighters I have now were fighting and training under unregistered grassroots gyms before they came to me. They want to train at my gym because they see my connections with Channel 7 and Lumpinee. Parents will come up to me and ask if they can send their kids to my gym because they know I can get them fights in Bangkok.

Here's the thing about sending fighters to Bangkok, though: it's expensive. You have to take into account travel expenses, food, lodging, all of that. My fighters new to Bangkok earn purses of somewhere around 6,000 to 8,000 baht (US $173 to $230). To cover just the basic expenses, a fighter needs to be making at least a 12,000-baht purse (US $345). 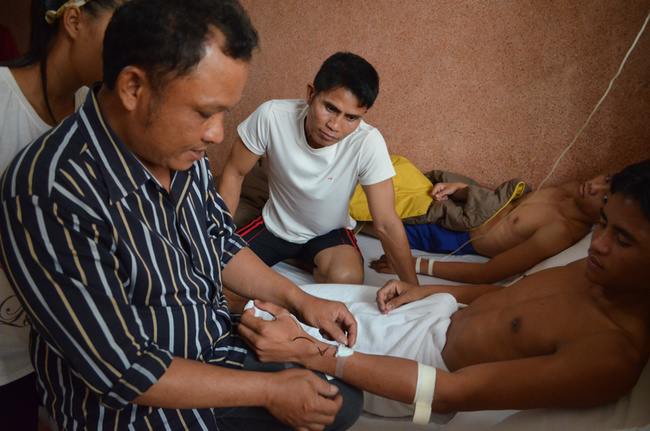 Now to make actual money off a fighter, not just break even, they need to be pulling 60,000-baht purses (US $1,728) and fighting for at least a year at that level. You have to take into consideration the fact that it took years to build this particular fighter, all the food, equipment, gas to early fights. Plus, you can't just raise one fighter. A whole gym is needed to make a top fighter. A community. I'm doing pretty well though because of the connections I built. It's easy for me to send qualified fighters to Bangkok. Other gyms and fighters struggle for years before they get their chance.

I too grew up as a fighter so I know what it's like. I've spent my whole life in Muay Thai; even when I was a taxi driver I was still involved in Muay Thai. Now that I have my own gym, I want to give my own fighters an opportunity to have careers in Muay Thai as well. There's no money in what I'm doing now, owning my own gym out in Buriram, but I love it and I want to do it because I care. I want the kids at my gym to be able to make money, build a career like I did, and take care of their families. And if I can help them do it through my gym and scouting, all the better.