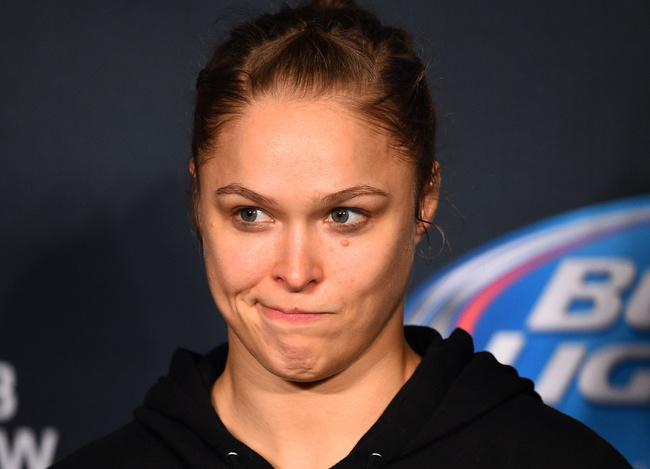 If you’ve been paying any attention to MMA since UFC 184, you’ve probably read, heard and/or seen some discussion about whether or not UFC women’s bantamweight champion Ronda Rousey, who continues to plow through her divisional opponents in record-breaking fashion, could, should, or will fight a man at some point.

Joe Rogan has speculated that she could beat at least half of the men’s bantamweight division. Dana White, who has previously asserted that Rousey could take boxer Floyd Mayweather in a street fight, joked about moving her over to the men’s division. Then MMA writers, fans, and even sports betting site Bovada weighed in on the topic.

It’s a weird debate, because who really wants to see that happen? It’s an offensive debate, because it undermines Rousey’s current dominance and implies that she’s only good for a girl, and that fighting a man would better prove her worth as a real fighter. It’s also a moot point, because she has clearly stated that she will not fight a man and has no interest in doing so. But the conversation is, at best, only showing moderate signs of stopping. Just yesterday, for example, bantamweight fighter Jessica Eye was asked to weigh in on the subject (Eye says women shouldn’t fight men).

With that in mind, we came up with a handy list of suggestions for anyone who wants to weigh in on the great Ronda Rousey vs A Man debate in a way that isn’t stupid, irrational, or just plain sexist.

1. Think of women’s divisions as their own weight classes.

Weight classes exist to pit people who are, within reason, physically similar to each other. A flyweight might have certain strengths against a heavyweight, like endurance and speed, but they will also have significant weaknesses in the areas of strength and size. It doesn’t necessarily mean that one is better than the other. It just means that they’re so incredibly different that there’s absolutely no point in making them fight each other. This is the exact same reason that we have separate women’s divisions. Women’s bodies and hormones—and this goes for both cis and trans women—come with a completely different level of strength, speed, weight distribution, and ability to cut weight, among a whole host of other things. This does not mean that they’re better or worse than their males counterparts. It simply means that they’re different. Separating by size and sex is what keeps fights both fair and interesting.

We all argue about who the greatest pound for pound fighters are. Most of us probably fantasize about how significantly different sized fighters would fare against each other. That’s a normal part of being a fan, and Rousey and the other women of the UFC can be included in the conversation. But think of pitting men against women in much the same way you’d think about, say, Demetrious Johnson facing Cain Velasquez. Many of us might wonder how that matchup would go down, but very few of us expect them to fight each other. It would be disrespectful to both men and their unique accomplishments with totally different bodies, and it just wouldn’t make sense. The same standard should apply to any discussions of men vs. women in MMA.

3. Understand what equality means in the context of MMA.

4. Keep your ego out of the conversation.

Whether you’re some random dude who has never set foot in a dojo or Ian McCall, it might be fun to try to look at the conversation in a way that doesn’t automatically assume that losing to a highly trained and decorated woman is gross, humiliating and/or unfathomable. That attitude isn’t just an insult to the woman in question, it’s an insult to the martial arts she’s trained in. 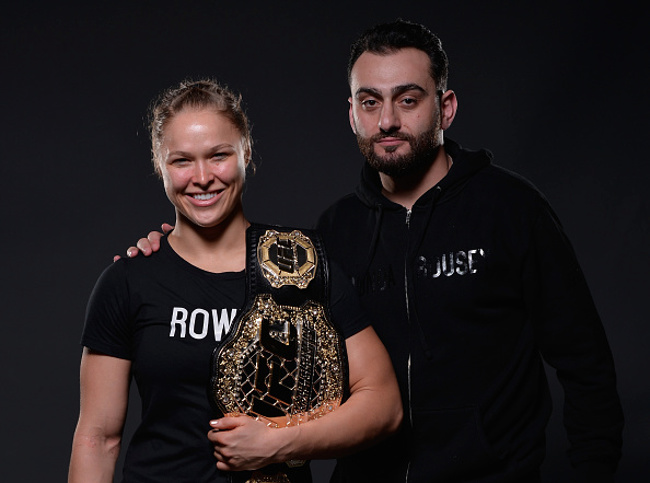 5. Do not, at ANY point, make a joke or point at a trans athlete’s expense.

Either in the context of women fighting men or in any context whatsoever. It’s unnecessary and hateful. That goes for everyone, including fighters.

6. On a side note, asking all female athletes in different disciplines if they think they can fight each other isn’t that much more useful or interesting than asking women if they can fight men.

Dominant female athletes are not the Highlander; there can be more than one. So it serves no purpose (besides cheap gossip and traffic) to ask Laila Ali, a boxer, if she thinks she can take Rousey, a mixed martial artist, in a fight. They do different things. They have different skill sets. Ali said as much when she was first asked by TMZ, saying, “For one, I’m not a UFC fighter, she’s not a boxer.” Yes, she did go on to say that “No woman can beat me, period.” But...

7. Don’t expect professional athletes to speculate that they might lose to someone.

Laila Ali is not going to say that she couldn’t defeat Rousey. Rousey is not going to say that she couldn’t beat a man. Whether they’re being perfectly scientific and logical about the assessment is beside the point. Thinking that anyone can defeat you and admitting it are detrimental to an athlete’s psyche. This is what Rousey was getting at when she stated that “I never say that I’m incapable of beating anybody, because I don’t believe in putting limits on myself. So I mean, I would have to say if you’re just talking about what’s in the realm of possibility of what’s possible of who I could beat, well I could beat 100 percent of them. You can’t tell me that there’s a zero chance that I can beat anyone on the planet, so I’m never going to say that.”

Women in all walks of life are consistently asked to be humble and diminish their strengths and accomplishments. This is bullshit, but it’s particularly egregious when it’s actually part of their jobs to believe they’re awesome, undefeatable athletes.

Rousey herself said so. “It’s not a reality,” she told CBS Sports’ Doug Gottlieb last week. “They’re not gonna do anything like that. Fights are chaotic. Anything can happen. And there’s no setting in which we should condone a man hitting a woman.”

Her mother also dismissed the entire notion as dumb.

9. Consider maybe talking about anything else.