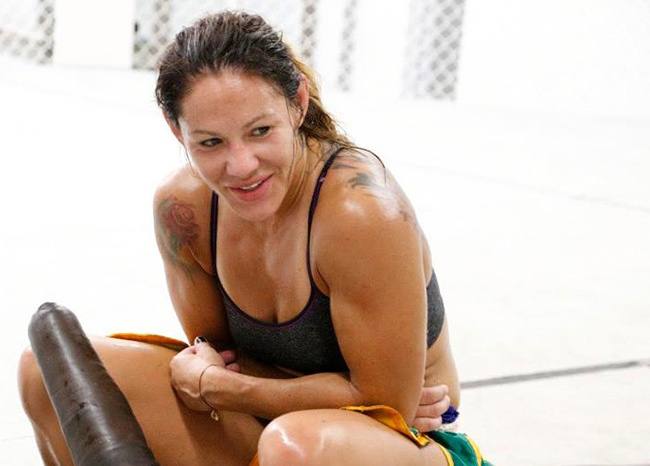 I’ve seen Cris “Cyborg” Justino fight in person twice. I was there for her Invicta debut when she destroyed Fiona Muxlow in April and her featherweight title fight against Marloes Coenen two weeks ago. Both were stressful to watch. I ended up peeking at the carnage through my fingers, like I do when I watch horror films. Or did before I realized that horror films leave me terrified and unable to sleep no matter how I watch them. Such is the price I pay for having an overactive imagination.

During her fight against Marloes on July 13, Cris prowled forward with her head lowered like a charging bull. She looked so menacing that I was reminded of a scene from that movie Sin City, when Dwight McCarthy looks at Marv, a giant and slightly disfigured hero, and says that he "just had the rotten luck of being born in the wrong century. He would’ve fit right in on some ancient battlefield swinging an ax into somebody’s face.”

The same is true for Cyborg, I thought. Replace the MMA shorts, sports bra and four-ounce gloves with leather coverings, feathers, teeth tied into her braids, war paint on her face, and a tomahawk in her hand, and there is no doubt in my mind that Cris could’ve been a deadly warrior in any Native American tribe. Give her a sword and fur-lined cloak and boots and she’d have plundered the world with the best of the Vikings. If you could turn her into a tiger, even that wouldn’t seem like much of a stretch. If I believed in things like auras, I would say that Cris’ darkens from a sunny yellow into a boiling red when she fights. She was definitely born in the wrong century.

With that thought in my mind, I got confused every time Cris stopped attacking Marloes the other night. It looked like Cris didn’t want to be on the ground with Marloes, but that didn’t make any sense. It wasn’t until I spoke with Invicta President Shannon Knapp later in the evening that I really understood what had been going on. “Cris doesn’t want to hurt anyone,” Shannon explained. “It’s hard for her to keep attacking someone once she knows they pose no risk to her.”

It’s hard to picture a Viking or a tiger showing mercy.

It’s also hard to reconcile the person Cris is in the cage with the person she is once she steps out of it. Having only seen pictures, my boyfriend was surprised at how feminine she is in real life. “There’s no way I am man enough for that woman,” he said, “but she really is pretty in, like, a scary Amazonian kind of way.”

And her behavior sometimes is just so… girly. She stops to fix her hair before posing for pictures with fans. She is soft-spoken, almost demure, when being interviewed. Her Instagram page is full of pictures of her with her family, in a swimsuit on a beach with adorably half-correct English captions (“Ready for surf!!!”), and smiling selfies complete with done-up hair, makeup, and cute dresses. As silly as this sounds, I just can’t believe she’s a normal girl in real life. I’d always sort of pictured her with the emotional range of the Terminator. What a walking contradiction.

At no point has this ever been more striking than when my friend, and pro fighter, Lauren Taylor’s boyfriend Joe proposed to her in front of everyone at the Invicta post-fight press conference last month. Cyborg was sitting to Lauren’s left, and when Joe grabbed a microphone and started his proposal, Cris looked confused, in the dark because of the language barrier. It was only when Joe pulled the ring out of his pocket that it dawned on her what was going on. Then Cyborg's face lit up like a sparkler and started squealing in delight, trying to hug Lauren from the side in excitement. I swear, it was one of the strangest and most endearing things I’d ever seen.