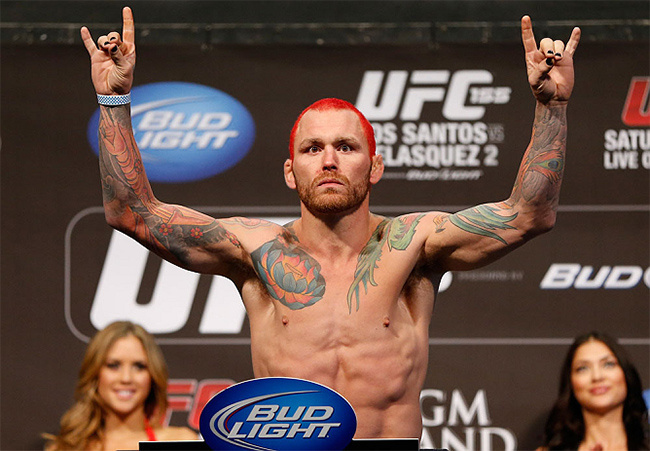 It’s easy to forget that when Chris Leben first entered the public consciousness as the spritzing, door-smashing ne’er-do-well on the first season of The Ultimate Fighter, he did so with near-unadorned skin. Because in the years since, every time he's stepped in the cage to either collect a scalp or offer up his own, audiences could see new outlines and fill-ins encroaching on his body. Now Leben is a walking advertisement for artists Jason Taulbee, Mike Ledger, Dominick McIntosh, and Richie Lucero—the guys that have since covered him from the neck down in mammoth tattoos. Here, Leben tells Fightland about the present his brother gave him on his 18th birthday, getting inked while staying sober, and the samurai on his back that, it turns out, isn’t actually a samurai at all.

Chris Leben: I think pale white skin is just a little boring. Liven it up. You move into a new house, the walls are white, and what do you do? You paint a few walls different colors and throw up some pictures, you know what I mean? And that’s really what I’m doing.

I really got [tattoos] as a way to stand out. All my work is big—I want stuff that people can see from 20 feet away when I’m fighting. I want people to be able to see my tattoos and recognize me. Tattoos are a portrayal of me.

I’ll be honest with you: The main reason that I have tattoos is to look cool. That’s it.

A lot of people say, “Well, what if you don’t want ‘em when you’re old?” You know what, I tend to know myself, and I have the confidence to know that I’m okay with this now, and down the road, I’m still gonna be okay with it. It’s just going to remind me of who I was and where I was at.

It was my 18th birthday when I got my first tattoo. I got a little dragon on the back of my right calf. My brother actually paid for it—nice guy. Probably the only birthday present he ever got me: He took me to the tattoo parlor and got me tattooed. That’s what family does!

He had this angry, screaming leprechaun on his arm that he had just got, and he wanted to take me to the same spot to get some super-cool tattoo work. So we went down and we just picked it right off the wall and put it on. I remember I wore shorts for a month straight, no matter how cold it was, showin’ off my badass tattoo.

It cost a buck seventy-five. He didn’t let me forget it.

I got the dragon and then I joined the army. When I was in the army, I met this guy in Virginia Beach who told me he was a fantastic tattoo artist. By my dragon, I wanted to get a samurai’s head and flames all around it. The guy was like, “Okay, cool, no problem, come on over to my house”—which I should’ve known signaled that it was a bad idea.

He’s looking at my leg, and he’s like, “You know what man, I see this thing in like a big ball of fire, I dunno about the samurai head—I don’t think it’s gonna look good. We should just do flames.” And he did the worst flame job ever—ever. Like a 6-year-old could have done better with a Sharpie.

That is a Japanese oni mask. And as the story goes, apparently it’s pretty well known as the symbol for jealousy and rage. Basically, a rich lady was on her way home, she walked in and found her husband having sex with another lady, she murdered her husband and the other lady, and then killed herself. The mask is actually the look on her face as she killed herself. Now, she’s a ghost and she stops couples that are in love. She’s a jealous ghost.

I came in one day and Jason was like, “Hey dude, I got an idea for your shin. Check this out.” And I’m like, “Fuck yeah!”

I got the front done, and Jason did flames around the guy from Virginia Beach’s flame job, so it’s a little bit of a cover up. The big piece on the front was really to take away from the junk on the back. 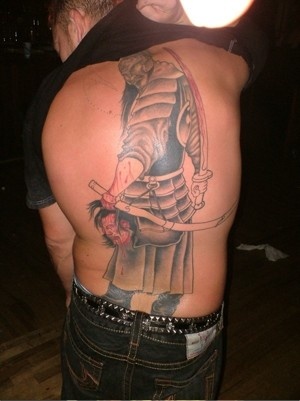 Jason was up in Portland, Oregon—he had a shop, and he had a guy come in, a Mongolian who was selling artwork, and he bought a couple of this guy’s paintings.

The painting that I had tattooed on me is Genghis Khan, done by an actual Mongolian guy, but everybody assumes it’s a samurai. For the first six months that I had it, I kept going, "No, it’s actually a Mongolian." Finally, it was, “Oh, I love that samurai.” Oh yeah, thanks. Technically, it’s a Mongolian, but who knows the fuckin’ difference? I know I don’t. 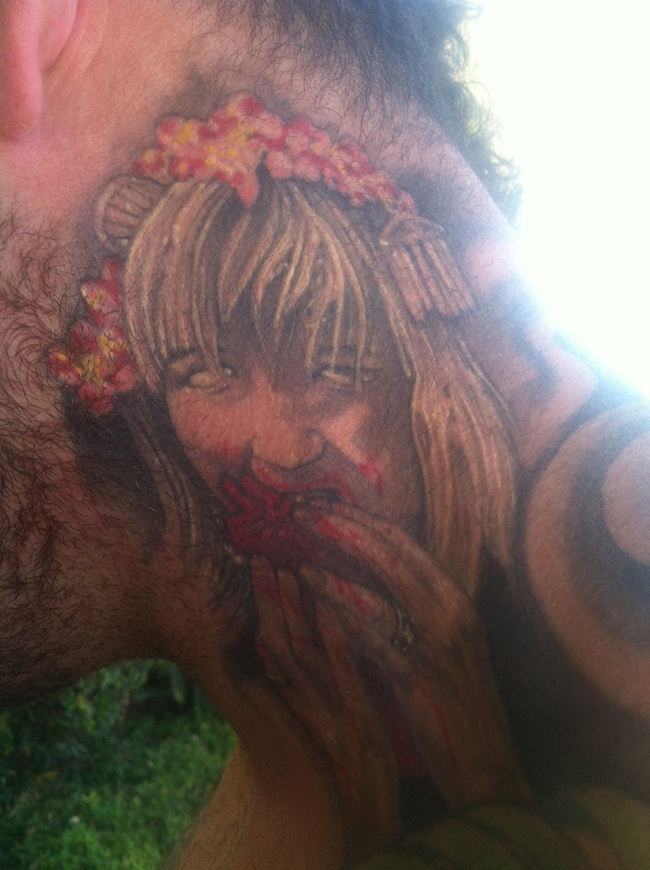 I went to Richie Lucero originally to get a portrait on my neck of my wife as a geisha zombie eating my heart. Kind of a tribute—not even ‘til death do us part.

Her parents love it. I’m being facetious. Absolutely. Her dad looked at it and he’s all, “Who’s that supposed be?” It’s your daughter. “Huh.” I don’t know what that means—he went, “Huh,” and walked off. 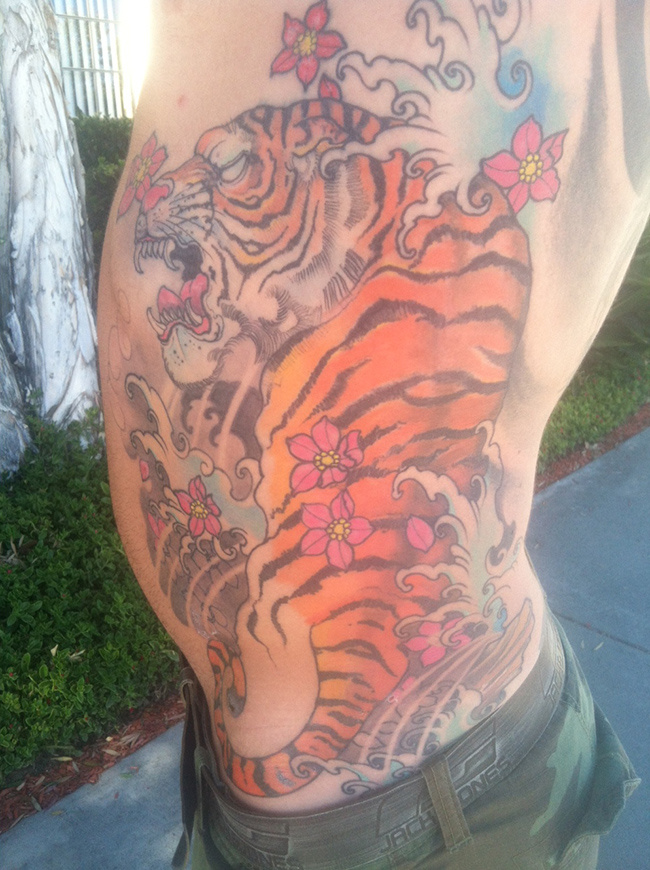 The artists always ask me, "Do you want this? Do you want that?" And I say, “Look, the most important thing to me is that it looks as sick as possible.” Nobody tells Picasso whether he [should use] red or blue.

I really wanted to get my side done. But it’s so painful, and now that I don’t take pain medicine and I don’t drink, I really didn’t know how I was gonna get through it. So as I’m talking about my neck, he was actually one of the first artists to realize this is a great avenue for him to get more recognition … The next thing I know, we’re drawing on my ribs on my left side, and that first session went for eight hours. Just a couple of ibuprofen. It was terrible.

Everybody’s always like, “But you’re a tough guy.” Well, usually when people are punching me, I get the option to block. I might not be very good at it, maybe I don’t do it, but at least I can try. When I’m getting tattooed I just gotta lay there and take it, you know?

I thought it was a clever excuse: “As an athlete, I’m more in touch with my body, and because I’m more in touch with my body, I feel pain a little bit more. I’m more sensitive to my body’s inputs.” That’s bullshit, really. Actually, maybe it’s 90 percent bullshit—I think in some ways that’s true. Some people are sedentary and they don’t really use their bodies—it’s almost like it’s gone numb. They just kinda block out their body. All their muscles are locked up and they don’t feel as much. 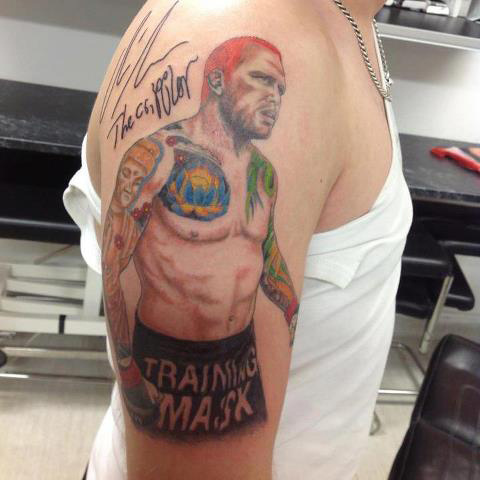 I dunno, man—you know you made it a little bit, that’s kinda cool. Like, fuck, I’m in a video game, I have an action figure, and someone has me tattooed on them. But at the same time, some guys at the gym definitely put me on blast for it. I got some cracks.

I was sponsored by Vince Neil Ink, his tattoo shop right out there on the strip. And I remember sitting there with Vince Neil and a couple of his rock and roll buddies, and all of their tattoos are about silver-dollar size. They’re covered [with tattoos], and every one of them is a story like “I was drunk in Panama” or “I was fucking with this hooker in Amsterdam.” They’re definitely story starters.

I would have to say never have tattoos brought me good fortune. Except when I was getting processed in jail, it took them a lot longer because they try to detail out every tattoo and tell what it is. That kept me out of the cell for a while.

There’s nothing I would ever take off. Whenever I get a new tattoo, I notice I’m always looking at it. After a while, they become who I am—they become a part of me. It’d be like asking Marilyn Monroe to take off her freckle. Jason Taulbee said, “Here’s the thing: A tattoo is a permanent reminder of a temporary feeling.”