The Curious Case of Holly Holm 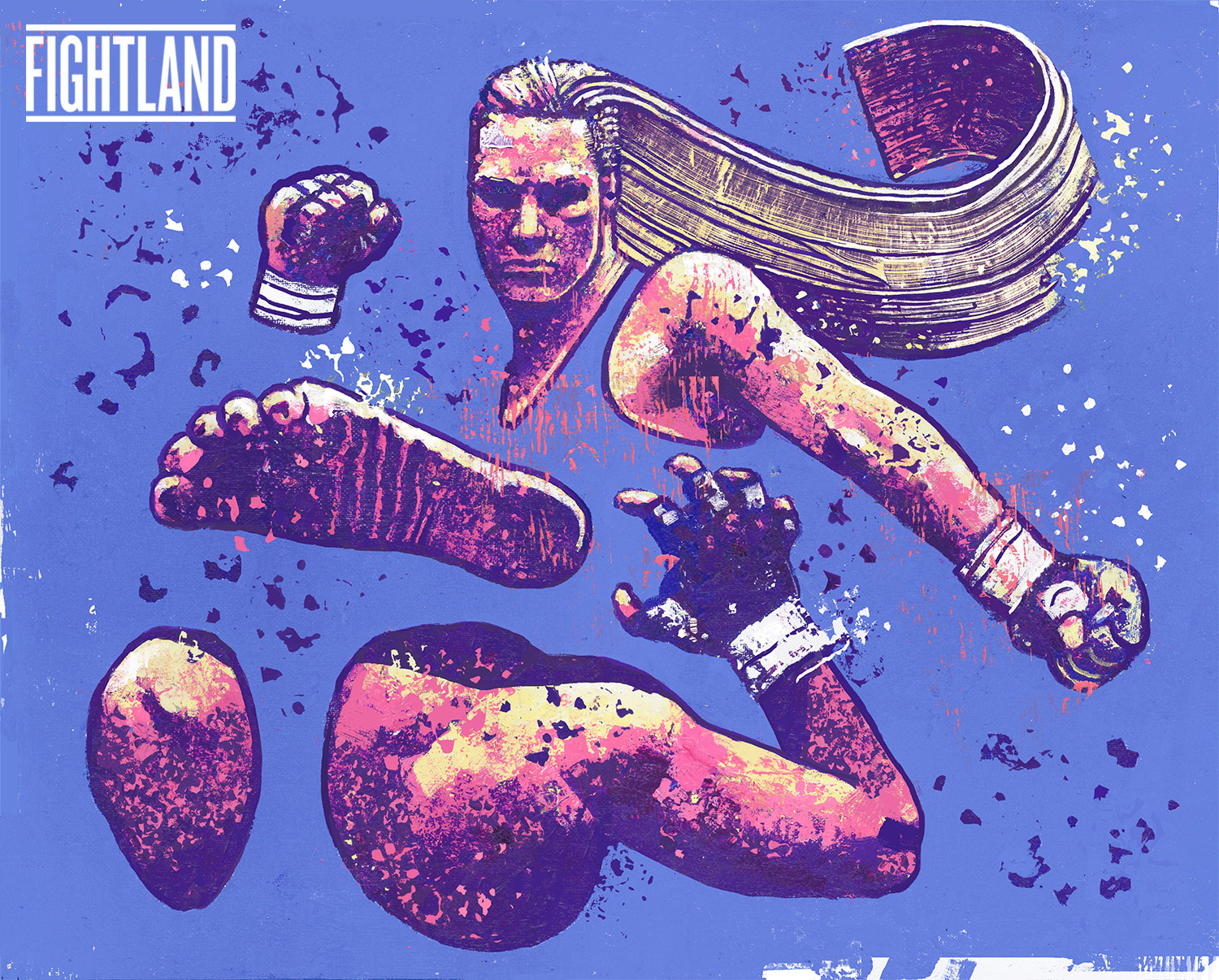 The fight game is all about questions. After all, when there seem to be no challengers left to fight, no questions left to answer, people get bored. But it seems as though UFC 208 has people asking all the wrong questions. Why is one of the top contenders for the middleweight title, Ronaldo 'Jacare' Souza, fighting the sub top ten ranked Tim Boetsch and why did it take Souza placing a fake Craigslist advertisement searching for an opponent to get even this fight booked? Why is #3 ranked Glover Teixeira taking on Jared Cannonier? Why is Wilson Reis, a man deemed worthy of challenging for Demetrious Johnson's flyweight title just a few months ago (before Johnson pulled out with an injury), still fighting in half empty arenas on the undercard against an opponent with a 1-2 record dating back to 2014? The most important question of all, however, is what is going on with this main event?

The idea of a women's featherweight division already hurts the heads of some fans. There aren't many top quality fighters who could reasonably compete at that weight, and even less who can't actually make the bantamweight limit. Hell, the second best women's featherweight of all time and the name that legitimizes Cris 'Cyborg' Justino's record is Marloes Coenen, who has quite easily made bantamweight throughout her career. It seems like this title is just plugging the star shaped holes in the UFC's pay-per-view schedule with more silverware. What makes it more bizarre is that the aforementioned Cyborg Justino, the consensus number one in the world at featherweight and the apparent reason for this division to be created, isn't involved in the title fight. Instead we have Germaine de Randamie versus Holly Holm. Germaine de Randamie fights on undercards and has amassed a 3-1 record. That loss came to the great Amanda Nunes, the victories came over opponents who boast a combined UFC record of 0-6. And Holly Holm? She's a particularly strange case.

When Holm defeated Ronda Rousey in November of 2015, the star power seemed to rub off of her instantly. The Rousey-Holm bout was one of the most beautiful technical performances in MMA history, and Holm made the long time champion—who had rarely been troubled at all to that point—look like a rank amateur inside the cage. While the UFC seemed to want the multi-million dollar rematch, Holm wanted to defend the title. She took on Miesha Tate and lost the title by a rear naked choke in the fifth round of a largely uninteresting fight. Four months later Holm took on the rising Valentina Shevchenko and looked lackluster as Shevchenko counter struck her way to a decision victory over five rounds. What makes Holly Holm such an uncomfortable fighter for fans is the idea that perhaps it hasn't passed her by, perhaps she hasn't lost it, perhaps she just is what she is and nothing of her was missing in her last two bouts.

Holly Holm burst onto the MMA scene as a woman with all the accomplishments possible in the world of boxing, but started making noise as she knocked out most of her opponents with kicks. Holm is not what many would consider a classically trained boxer, after all, she is a student of Mike Winkeljohn who trains kickboxers and MMA fighters. The fact that she owned these kicking skills simply surprised those who weren't familiar with her background. Holm's game as a boxer was about a high pace and lots of walking with her punches. With the addition of kicks the southpaw Holm could get dominant footing, step out the side door, and throw up a leg when she left. Holm surprised and stiffened a good few women like this.

In her first two UFC bouts Holly Holm looked very average. Raquel Pennington and Marion Reneau were the best opponents Holm had every faced by a long shot and Holm did not impress many fans. When she was matched with Ronda Rousey, most figured she was a lamb to the slaughter. But the flaws in Rousey's game matched up perfectly with the experience and discipline of Holm. Rousey moved in on straight lines and could not cut the ring, Holm could circle the cage beautifully and never took two steps backwards without breaking the line of attack. Rousey's head movement was non-existant and Holm's counter punches were laser accurate against such a static target. Rousey never, ever shot for takedowns or changed levels so every advance she made to the clinch was a run from distance through Holm's striking range. Rousey exhausted herself chasing Holm, then by eating punches. Even when Rousey did get the clinch, Holm had trained incredibly opponent specific, keeping Rousey's preferred arm jammed to her body, curling up like a prawn and leaning on the fence to deny throws. Out in the middle of the cage Holm was even able to counter a Rousey harai-goshi with an ura-nage, the favourite of Cyborg Justino and a talking point among the people who still care about that fantasy match up to this day.

When Holm met Miesha Tate, the latter spent the fight encouraging Holm to punch her in the face. Tate, unlike Rousey, had a good shot and level changed frequently, and would look to time these underneath Holm's punches any time Holm committed to hitting.

When Holm wasn't cautiously putting in long, flicking strikes from outside, she opened herself up to the possibility of the takedown. In the fifth round she hit Tate clean in the face with a left straight but the challenger still ducked in and scrambled to the champion's back, locking in the rear naked choke and putting Holm to sleep.

Against Valentina Shevchenko, the smaller kickboxer's distancing threw Holm off. The American ex-champion attacked the air in front of Shevchenko with strike after strike, with a kiai on each. Shevchenko committed her own violence against the void, attempting to spin for a backfist each time she felt Holm was stepping in. Struggling to get in with strikes on the feet, Holm pushed to the cage and attempted to rough up the Muay Thai champion in the clinch, which resulted in her being thrown to the floor.

There is a search for reasoning regarding Holm's rapid fall from grace. Maybe she lost a step or her motivation. What seems more likely is that Holm embodies that old fighting phrase: 'styles make fights'. It is unlikely that anyone else in the division could put on the kind of top-to-bottom master-class that she did against Ronda Rousey at the top of her game, but equally Holm had looked very average in her UFC performances up to that point. Going through Holm's crushing of no namers on the regional circuit, and her UFC career, it seems as though Holm occupies this strange middle ground where she likes her opponent to come to her, but doesn't like the risk of them level changing under her blows. Miesha Tate was the most legitimate threat of a traditional takedown that Holm had met, and that proved to be the gamechanger in that bout. Valentina Shevchenko was easily the best striker Holm had met in the cage and hung back away from Holm, who seemed to have tremendous difficulty even reaching the smaller fighter.

In Germaine de Randamie, Holm is not meeting an average all rounder. She is meeting a long, rangey striker with the kind of phasic in-and-out movement that vexed her against Shevchenko. What's more, in her few UFC performances De Randamie has put in some brutal work with her knees in the clinch. This could be Holly Holm's chance to snap the losing streak before it really gets going, and to become the fourth person ever to hold titles at two weights in the UFC. But on paper it appears as though it could just as easily turn into another awkward, ugly fight for the woman who ended the Rousey era.

Hill vs. Andrade: The Best Strawweight Bout to Date

Masvidal vs. Cerrone: Controlling the Inside Line