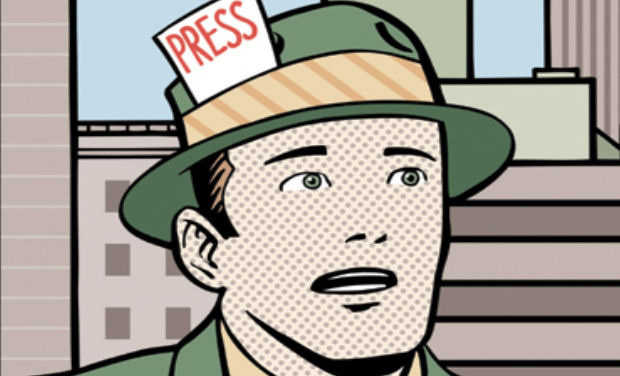 Weigh-ins are over at Invicta FC 5 in Kansas City and I’ve consumed a celebratory pile of Italian food so delicious I am shocked to find it in the bulls-eye of the country. I’ve just waddled my stuffed self back into the hotel with my friend, and first-time Invicta fighter, Lauren Taylor; her boyfriend, Joe; and her coaches, Pat and Alex. Everyone is going to bed but I go wandering around to give my best friend some alone time with her man. Naturally, I end up downstairs at the bar, where I know there will be enough whiskey to lull my apprehension around strangers.

I snag a stool, order a Jameson on the rocks, and go about observing the odd assortment of humans milling around the bar. Tito Ortiz is talking to a small crowd. Man, his noggin really is as big in real life as it looks on TV, I think to myself as I, more quickly than necessary, sip away at that nagging, there’s-no-way-I-fucking-belong-here feeling I still get around famous fighters. Julie Kedzie is talking to some of the Jackson’s MMA people a little ways away, and I wish I had the guts to wander over and attempt to make conversation. I’d spent a week at Jackson’s MMA last October and gotten lots of chances to talk with Julie and hang out with her dog. I already knew she was cool as fuck, but then I read an interview she did with Fightland where she disclosed that, through a series of unfortunate events, she’d wound up being hit on by the kingpin of European slime, Italian Prime Minister Silvio Berlusconi, after shitting her pants between rounds during a fight in Russia. The don’t-give-a-fuck you’d have to have to publicly tell that story makes Julie one of my true heroes. I’ll tell her that someday.

I get to talking to some of the people standing around the bar and discover that pretty much everyone there who isn’t a fighter or coach is a writer or media person of some sort. Ah ha! My people. Time to do a little elbow-rubbing. One of them runs a site that I read regularly and we are talking about fight-writing stuff when he mentions how “unprofessional” it is when journalists want to take pictures with fighters. I frown a little in confusion and ask, “Is that against the rules or something?” He nods emphatically, “Oh yeah. I mean, you’re there to be doing a job, not to be acting like a fan boy.” I find out he wrote one of the columns I’d read predicting Lauren was going to lose to her much more experienced opponent. “You have no idea how wrong you are, but that’s okay,” I tell him. “You’ll find out.”

We’re interrupted by a very giddy, very glassy-eyed woman who covers women’s MMA for another site, and are talking about Shayna Baszler, who is standing a few yards behind me. Pictures are unprofessional but apparently being hammered around colleagues isn’t. I think I’m okay with this. I don’t care that she’s drunk because she’s pretty damn funny, but her friend leads her away soon after, saying it’s time to get her to bed.

The next guy who wanders over is wearing a tailored three-piece brown suit. “You must be here for some Invicta-related reason,” I tell him, looking down at my yoga pants and 15-year-old Ezekiel Skateboarding T-shirt. “You’re done up awful fancy compared to the rest of us.” If I’m supposed to be cruising around in this dude’s kind of get up, I quit. He grins at me. “Nah, I just come in to visit my friend sometimes,” he says, gesturing at the bartender. “I manage the Maker’s Mark Lounge over at the Plaza and drive monster trucks. Ever heard of the Outlaw?” This guy is absolutely full of shit. He pulls out his phone and starts flipping through pictures. He is absolutely not full of shit. Seeing this, the MMA writer who believes in being “professional” starts schmoozing with the monster truck driver. I’m a little tipsy and monster truck guy has started asking “So… you got a boyfriend?” type questions, so I escape to the elevator. Three-piece suits are such a turn off.

The following night I drive with Joe over to the Ameristar Casino, where the fights are taking place. I’m trying to be casual because I can see that he is trying hard not to crawl out of his own skin. I don’t feel any less freaked out though. I’m the only person who has been to every single one of Lauren’s pro MMA fights, and I still can barely handle my shit come fight day. Joe and I agree on the walk from the parking lot that the coping method we used at Lauren’s last fight--waiting until it was over to get drunk--was utterly foolish. Beers are purchased as soon as we find seats.

I save two seats for some other friends and decide to wait until they arrive to go find my designated press seat so that I’m not leaving Joe alone to chew his fingers off. When they show up, I go looking for the seat with my name on it and can’t find it. The guy in charge of media credentials told me there’d be one. I walk between tables, asking everyone seated if there is a seat with the name “Aurora” on it in their row, but they all look at me apologetically and tell me to check somewhere else. Every single one of them is wearing nice clothes. I am wearing jeans, flip-flops, and a black tank top. I did put earrings on, but apparently I should have bought a dress. Whatever. I find an empty seat in the press row that does not have my name on it, but I’m told the guy didn’t show so I can have it.

I’m the only one without a laptop set up on the table. I have a pen and paper in my back pocket. The lady next to me has a bunch of windows open at once that she’s flipping through, only barely paying attention to the cage. How is she going to see what’s happening staring at that screen? In one of the windows she’s taking notes similar to the way I do it: the feel of the place, the attitudes in the crowd, stuff she’s noticing. It’s then that I notice she’s with Sports Illustrated. I am totally out of my league here.

I’m also the only person holding a beer. One of the guys in this row is the gentleman from the previous evening who doesn’t believe in taking pictures with fighters. I scan the other rows of press people. Still the only one holding a beer. This unspoken code of writer ethics is fucking confusing. I wish I still had a seat up in the bleachers with Joe and Fuji. Damn.

I refocus my attention on the cage. This fight has turned into a wild scramble. These girls are all over the cage, in and out of submission attempts, absolutely kicking the shit out of each other when they get back to their feet. A few of the landed punches draw an involuntary gasp out of me, and I cover my mouth and nose with one hand. I am getting into this fight. I start murmuring things under my breath. “Ouch!” “Holy shit!” “Get up girl!” “Move your head!” I’ve scooted forward to the front of my seat and I’m flinching or lurching forward as things get crazy in the cage. I’m wringing my hands, popping my knuckles, alternately covering my mouth, throat, and heart, when I suddenly realize that I am the only one in this row making any noise. Or moving. Or showing any emotion at all. I catch a few eyes in stone-solid faces that look disapproving, or maybe I’m just suddenly self-conscious. Everyone else looks straight forward or down at their screens. What is wrong with these people?! This is a great fight! Am I supposed to be passively witnessing all of this without displaying emotion?

I can’t go back to the seats up in the bleachers so I decide to wander around the floor. As I’m getting up, I remember I’m the only one with a beer in my hand and an Invicta press pass around my neck. I flip the pass over and hold it next to my body under one arm. Maybe I should just take the damn thing off. I walk up the steps to check on Joe, who seems all right. “Those other press people are big party poopers,” I tell him. “They look like they’re watching a lawnmower instructional video instead of a fucking fight. I’ll be back when Lauren is up.”

I wander around until I spy an unoccupied piece of floor at the bottom of the stands next to a security guard. She sees my pass, returns my smile, and doesn’t say anything about my beer. Soon we’re both cheering and yelling those inane instructions fight fans yell because … well, we have to yell something. From around the corner, two women and a bunch of security guards walk past and stand right behind me. One of them is Fallon Fox and she looks pissed. She moves so femininely I’d never guess she used to be a guy if I didn’t know. I wonder if someone was an asshole to her. I find out later she’d just been escorted out of the fighter area for starting some beef with Bec Hyatt.

When it comes time for Lauren’s fight I’m wound so tight I don’t care where I’m supposed to be sitting. I make my way back up to where Joe is and park myself right in the aisle. I don’t need a seat. I know I’ll be on my feet during the whole thing anyway. By the time things get started I’m yelling so loud one of the press people turns around to look at me. My voice is cracking already. I don’t care. I’m not here to be a professional. I’m here to be a part of these fights in my own small but very loud way. I write about fighting because I fucking love fights. I am first, second, third, foremost and always a fan, and sitting silently trying to appear uninvolved or unbiased is so past impossible I’m not even going to try. Fight fans read fight writing. They’re going to identify with me before any of you.

After Lauren wins and I get my tear-filled, sweaty hug, I take the press pass off, drop it in my bag, and go get a second beer.