The Dangerous Life of a Muay Thai Editor

The bell rang and Yodwanpadet, surprisingly spry for his 53 years, landed two low kicks in the first few seconds. Somrak instinctively checked a kick, a foul in this boxing-Muay Thai match. He smiled and put up his hands in a wai gesture of apology to Yodwanpadet's blue corner.

Seeing former champions Yodwanpadet and Somrak face off brought back a flood of memories for the 66-year-old Suwanna. On April 2, 1982, exactly 33 years ago to the day, around the time a much younger Yodwanpadet was fighting for his stadium titles, Suwanna, her husband, and her 10-year-old son were sitting ringside at Lumpinee Stadium when a bomb went off. 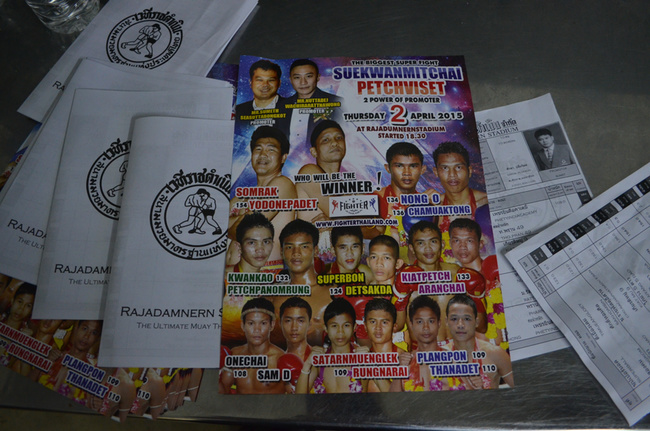 She had been at Lumpinee for work that night. Long before Suwanna had become editor-in-chief of a top Muay Thai magazine, she was a budding Muay Thai journalist working in partnership with her husband and fellow Muay Thai reporter, Horn Phayathai. Muay Thai journalism back in the turbulent 1980s was dangerous. The mafia was powerful. Bombings, shootings, and other assassination attempts were frequent.

When the bomb went off, Suwanna initially thought it was an electrical problem up by the bell, the other side of the ring from where her family was sitting. Her husband Horn knew immediately what was happening, though. "Get down on the ground!" he shouted, and pushed her out of her ringside chair. Her young son, who had been playing nearby, was screaming for her.

Suwanna heard shouts that someone had died. People started running. She grabbed her husband and son and fled the stadium.

The bomb had been set off by assassins looking to kill a high-ranking mafia member named Klaew Thanikul. There were fatalities that night, but Klaew was not among them. Suwanna and her husband were lucky to have escaped unharmed.

"The shootings and bombings were always the most dangerous part of the Muay Thai environment," Suwanna said now from her relatively safe vantage point in 2015. Assassins kept targeting Klaew and other other members of the Thai mafia at Muay Thai fights. As reporters covering the fights, Suwanna and her husband were often present when gangland violence erupted.

Klaew was eventually gunned down in a car years later in 1991. But stadium assassinations didn't end with his death. "After Klaew died, there was another mafia shooting at Lumpinee," Suwanna said. "I was there that night too. They shot into the air to scare everyone and then they shot the mafia guy in the back of the head. The bullet came out through his eye socket."

The spate of violence prompted stadium management to beef up security. Police dogs were brought in and people were searched at the entrance. Various structural renovations were made with safety from would-be assassins in mind. "There used to be wooden stands at the old Lumpinee Stadium," Suwanna said, "and it was dangerous because people could hide underneath. That was a big reason why they renovated the old stadium and fixed the seating areas." 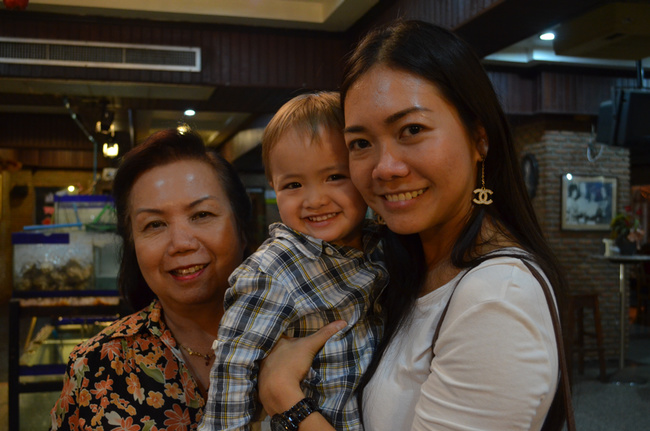 Suwanna grew up the world of Muay Thai. Originally from the province of Prachinburi, she learned about Muay Thai from her father. He took her to watch fights at the local temple fairs, explained the techniques and basics of scoring. Later, she married a leading Muay Thai journalist, Thaweesak Roongsamai, better known by his pen name Horn Phayathai. She started helping her husband compile boxing records, reading about fighters and putting together stats. By the late 1960s, she and her husband were co-stars of a Muay Thai radio show on Channel 9 (now known as MCOT). People around the country tuned in to hear the commentator couple discuss recent fights, toss around stats, and make predictions. They broadcasted together until Horn's death in 1985.

After her husband passed, Suwanna continued the show alone. The first and only woman to have her own Muay Thai radio show, she quickly garnered a devoted following. A year later, the owner of Muay Champ magazine contacted her with a job offer.

Less than 10 years later, she had worked up to the position of Muay Champ's editor-in-chief. 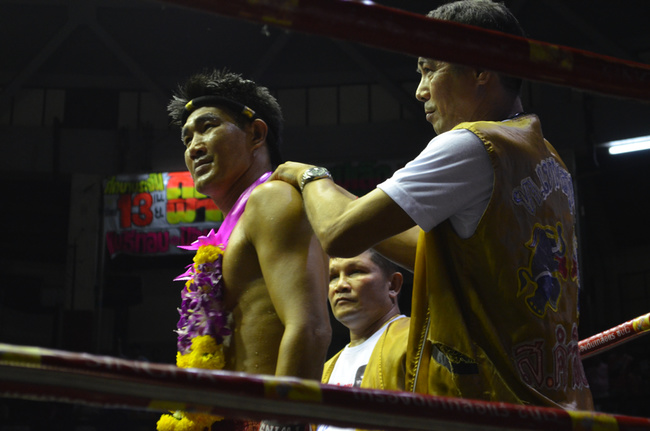 Now an old hand in the Muay Thai reportage and publishing world, Suwanna maintains that the hardest part of her job is figuring out how to write about the higher-ups in Muay Thai society without risking safety or reputation. "You're a reporter, you're writing news articles, and you have a duty to tell the truth," she said, "but in Thailand, it's dangerous to write anything negative about a powerful person in a direct way."

Journalists have to be careful; assassination attempts in the Muay Thai world aren't just limited to gangsters. "A long time ago, one of our own Muay Champ journalists wrote negatively about someone powerful in Muay Thai society, and he was gunned down," Suwanna said. "Another journalist who writes for another magazine, he was attacked too. The perpetrator tried to bludgeon him with the pestle you use to make somdam with. He survived, though.

"This kind of danger, though, is not limited to Muay Thai," Suwanna added, pointing out that being unable to write about certain people and issues without fear of retribution is a problem for many journalists in all parts of the world.

Muay Champ employs about 50 to 60 people, many of whom are freelance writers. Reporters live all over Thailand and e-mail Suwanna their dispatches. Most reporters have full-time jobs outside of Muay Champ, and only a small handful are able to sell their stories to multiple boxing magazines and live off their writing. 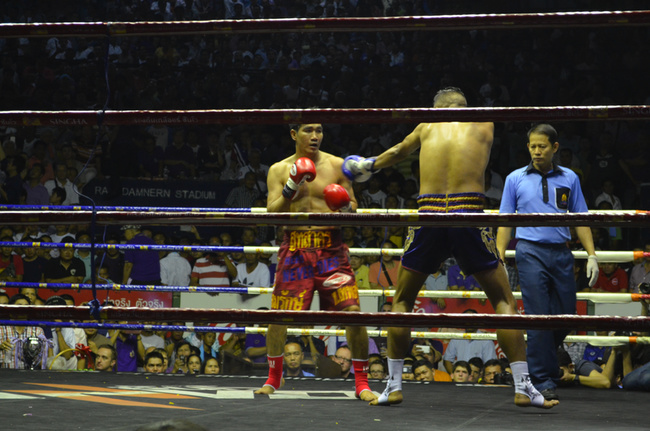 Muay Champ's editor-in-chief may be a woman, but just as Muay Thai is a male-dominated sport, Muay Thai journalism is a male-dominated field. When asked why there aren't more female Muay Thai reporters, Suwanna points to a few barriers. The first is a lack of experience and knowledge necessary. "You have to love Muay Thai to be a Muay Thai reporter," she said. "The sport has a very specialized vocabulary—words they use in the stadium, words related to technique or to gambling—so you need a strong background and understanding of this field. You need to know what you're seeing when you watch fights. Not many women have this kind of expertise."

Suwanna maintains she'd be more than happy to hire a former female fighter or other woman who had a strong background in Muay Thai, but another barrier is disinterest. "No women contact us about the job!" she said. "I honestly don't know why there aren't more retired female fighters who want to become reporters for us."

Then there are the difficulties inherent in being a woman in a primarily male environment. According to Suwanna, limitations exist because of the culture. "Some parts of the city, or some fight events or gyms, those kinds of places might be dangerous for women to enter because of the attitudes of the men. What's more, men talk to women differently, treat them differently, than they treat other men. This can be a good or bad thing, but either way, there are often complications when men and women work together, especially in the Muay Thai world."

For women who want to become Muay Thai reporters, Suwanna offers the same advice as she does for male reporters: "Find good stories, read about boxing, gather experience in your subject. But the most important thing is to build connections in the boxing society, get to know people and interact with them. It's different than being a regular news reporter. Being a Muay Thai reporter is all about connections." 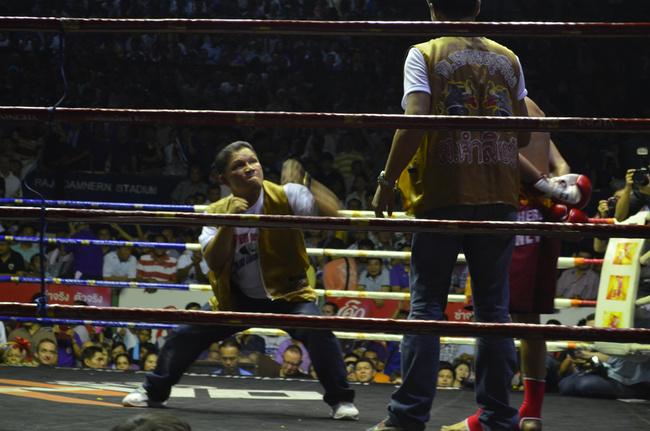 The coverage the magazine gives to women's boxing is sparse. This is largely a reflection of the state of women's Muay Thai in Thailand. "Our readers aren't really interested," Suwanna said. "Most of our readers are gamblers, and sure, they'll gamble on anything, even chickens, but they don't usually bet much money on female boxers, not like the huge sums they bet on men. They just don't follow female fighters, and most women don't fight often enough to grab the attention of big gamblers."

Part of the absence of female boxing information is due to the promotions themselves. "We do write about female boxing when promotions send us news, but many promoters just don't get in touch. Like World Muay Thai Angels, sometimes they send us news so we'll run it. But even then, they're more focused on promoting themselves on TV and the internet, not boxing magazines, so we don't get much information from them. We used to have a column devoted to female boxing about 10 years ago but we ended it after two years because there just wasn't enough news." 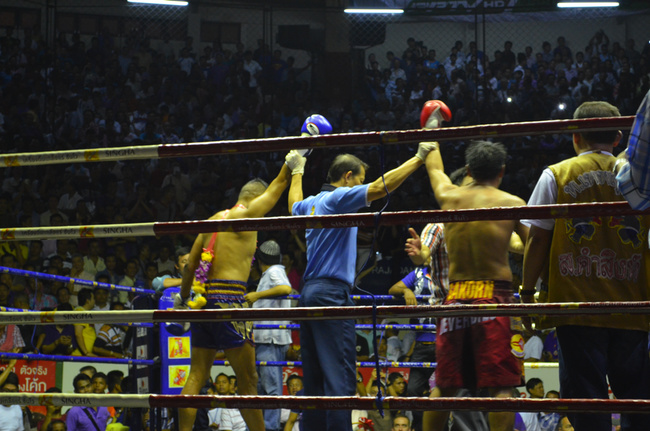 Muay Champ's female boxing column might have ended long ago, but its international column is alive and well. More and more international fighters are breaking into Thailand's Muay Thai scene, and the Muay Champ editor is taking note. Suwanna's daughter is in charge of the weekly international column, which focuses on various combat sports around the world, including boxing and MMA.

"We used to think foreigners couldn't really do Muay Thai," Suwanna said. "It was Muay Thai, the sport of the Thai people, and the foreigners didn't know how to punch or kick right. But it's all changed. Muay Thai is growing quickly with foreigners, but it's stagnant in Thailand. All people care about here is the gambling, which has become detrimental to the growth of beautiful, impressive technique that Muay Thai used to be famous for. Instead, now you have all these foreigners coming to Thailand, learning Muay Thai well. When they fight, they don't care about impressing the gamblers. They practice beautiful technique instead of the hard style that the Thai boxers do for the gamblers. So no longer can we say that foreigners don't know how to punch and kick; some of them punch and kick better than Thais! Now some foreigners are getting into the business, opening their own gyms, and guess what: Thais are working for them. We Thais, the owners of Muay Thai, are now working for foreigners."

No foreigners were competing at Rajadamnern that particular night, though. Suwanna leaned forward in her chair during the last round of the Somrak-Yodwanpadet match. The fight had been entertaining, Yodwanpadet's knee-heavy style against Somrak's technical boxing. Like many other onlookers, Suwanna thought the fight would go to Somrak. When the decisions were handed in, though, a draw was declared. Somrak's corner was in an uproar; how could he have been cheated like that? Even the military and government officials seated in Suwanna's section were surprised. But Suwanna remembered Somrak's checked-kick foul in Round One, plus Yodwanpadet's strong knees in Round Four, and could see how the scores might have added up to a draw.

The legendary Samart Payakaroon, Somrak's cornerman that night and a contemporary of Yodwanpadet's, having won multiple titles in the 1980s as well, was immensely disappointed in the judges' decision. He dismissed the smiling Yodwanpadet post-fight with a flick of his hand and followed Somrak out of the ring. Yodwanpadet returned to his elated supporters in the Blue Corner, ignoring the jeers from the pockets of Somrak fans clumped across the stadium.

From up in the stands, Suwanna looked on in amusement at the stadium full of emotional fans, some cheering, some shouting and cursing. Muay Thai can always be counted upon to elicit a visceral reaction from the audience, especially when it's a fight of this magnitude, a highly anticipated match between two aging champions. Suwanna looked forward to reading about it in the next issue of her magazine.

The Expensive Road to Thailand: Crowdfunding in Muay Thai