The Donkey Guard and the Farce of a "Real Fight" 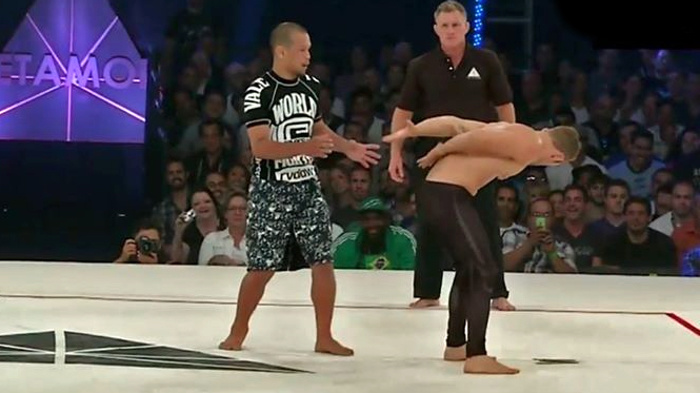 Jeff Glover is flamboyant for a jiu jitsu player, and you can either credit or blame his penchant for showmanship for the Donkey Guard. It's a bit of a misnomer: it's not really a true guard as much as a strange, small-guy set-up for sweeps and leg locks, and Glover says he created (but didn't name) the position to "get a rouse out of the crowd in professional grappling events." He did exactly that in the opening seconds of his match with Baret Yoshida at Metamoris IV, where he used Donkey Guard to spin into a heel hook attempt to roars of approval.

And recently, Glover made a tongue-in-cheek-and-now-retracted call for a ban on Gracie Tournaments because of a regulation specifically banning the Donkey Guard. There it is, right under the section headed "Realism Rules":

"No Donkey Guard - This is just silly! I can’t even consider this a guard. If you were to ever do this in a real fight you would get kicked in the groin. So for this reason, this technique will not be allowed at Gracie Tournaments."

How ironic, considering the flimsy grip on reality that jiu jitsu tournaments already have.

Maybe more than any other martial art, Brazilian jiu jitsu has been subject to the tension between tradition and exploration. In the decades since the Gracie family arrived in America, jiu jitsu academies and jiu jitsu practitioners have proliferated, and every sparring session provokes questions that need to be answered and problems that need to be solved. Those answers and solutions come in the form of unorthodox and marginalized positions—X-guard 50-50 guard, and so on—that experts can capitalize on and parlay into YouTube fame. All the while, closed-guard traditionalists frown and Helio Gracie rolls over in his grave, wondering what they have wrought.

Such as it is, the Donkey Guard is obnoxious. If you only have a year to learn jiu jitsu, you should spend zero days learning a position where you intentionally give up your back. If someone tries it on you, you could be forgiven for wanting to kick them in the ass. But unlike prohibitions for heel hooks and neck cranks—measures made under the guise of competitor safety, particularly for lower belt ranks—the Donkey Guard ban is purely for matters of realness, or lack thereof, an arbitrary step down a slippery slope. Donkey Guard doesn't physically endanger anyone anymore than conventional jiu jitsu. The only thing it endangers is the logic that leads BJJ players to conflate punch-free pajama wrestling matches as fights.

The fear among traditionalists is that sport jiu jitsu risks turning the sport into point karate, that practicing entirely with the rules in mind pollutes its street-readiness. But looking at any martial art as a panacea for a "real fight" is dangerous. Street fights threaten guns, knives, brass knuckles, broken glass, multiple assailants—the sorts of unknown variables that could turn a jiu jitsu world champion into a bloody smear on the sidewalk. There’s no prohibition against lasso guard in Gracie Tournaments, but try playing lasso guard in a "real fight" without getting your balls (assuming you’re male) smashed like eggs on a frying pan. Try playing turtle guard in a "real fight" and not getting your head soccer-kicked three blocks away. Try pulling any kind of guard at all, for that matter, and see what happens when the friends of the guy you’re trying to underhook rush in to help him.

None of this is to say that jiu jitsu in general is useless in a spontaneous fight, and it doesn’t diminish the value of jiu jitsu tournaments (even the ones that ban knee reaping or tell you what color gi you have to wear). Imposing limitations controls the environment in hopes of safety, fairness, and uniformity for competitors. But every tournament is contrived. It will never be spontaneous, so the "real fight" standard isn’t reason enough to ban the Donkey Guard: while it might mock the rules, it conforms to them until you specifically ban the position. More to the point, nothing about the Gracie Tournaments' rules resembles the chaos of a confrontation where you could kick your opponent in the groin with impunity.

If there really is a critical mass of loathing for the Donkey Guard, there’s another solution: figure out a way to win in spite of it. That’s what you’d have to do in a real fight anyway, right?

The Way of the Tortoise: The Role of Turning Fetal in a Fight