The Dragon Muay Thai of Phuket 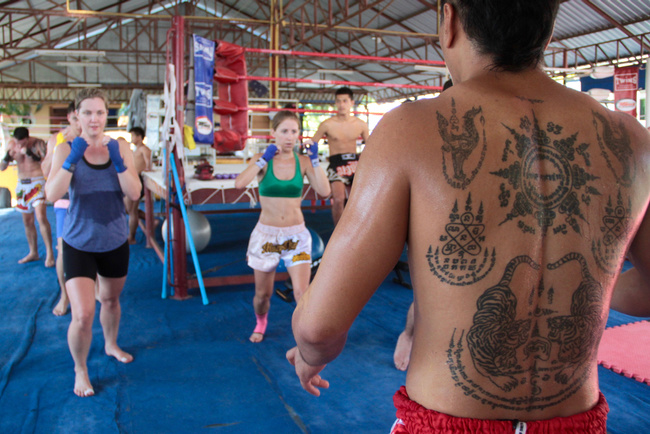 Eight years ago, an educated fighter-turned-trainer from Phuket bought a bit of land on a quiet street on his home island and set up a gym. He hired trainers from all over Thailand, recruited a few promising Thai fighters, and sent them to fights. He called his new gym Phuket Dragon Muay Thai.

Then the foreigners started arriving, more every year. Businessmen, both local and foreign, snatched up patches of land. New fitness gyms popped up, scattered amid cafes and restaurants offering nutrient-dense cuisine. The quiet street became a new paradise for fitness enthusiasts on holiday. And in the middle was the little Muay Thai gym, changing and growing along with the neighborhood. 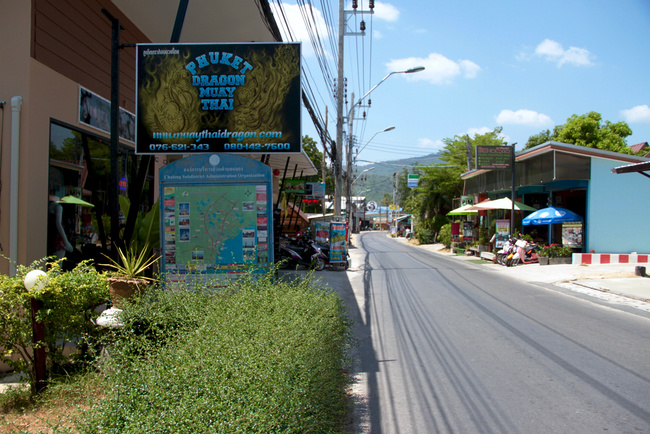 Dragon still sits in its original location on Chalong’s Soi Ta-ied, still owned and operated by its founder, Ekkarin Lookchan. He steps out of his gym’s front office and surveys the once-quiet, now-bustling street, Soi Ta-ied. “It’s all changed,” Ekkarin says. “This street is so different now. All this?” He points to the spread of protein smoothie bars and fitness centers with bungalows in back. “All this used to be jungle.”

Thirty-eight-year-old Ekkarin Lookchan is a rare local on an island where it seems nearly everyone in the Muay Thai community is from somewhere else. Like many other gym owners, Ekkarin grew up as a fighter. His father had been a fighter in Bangkok in his own youth, and had started young Ekkarin in Muay Thai. Ekkarin first stepped into the ring around age 13, fighting until his early twenties. Unlike many other Muay Thai fighters who grow up in the sport and amass fights in the triple digits by the time they hit adulthood, Ekkarin fought only about two dozen times. He attributes his comparatively small fight record to his focus on school, not a future as a pro fighter. After honing his coaching skills at a local sports center in his village, then working as a trainer at now-defunct Chalong Chai Gym, he struck out on his own at age 30 and opened Phuket Dragon. 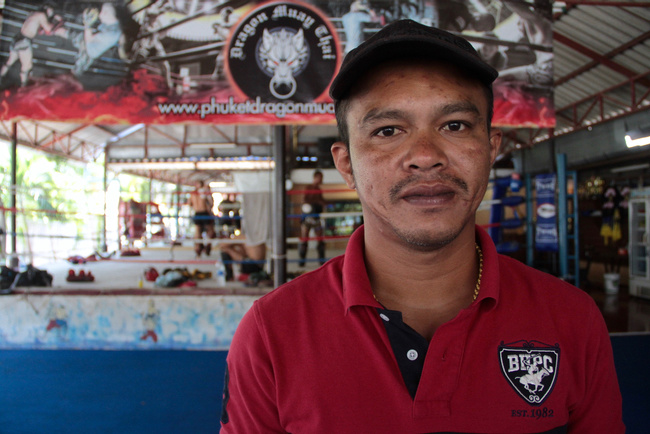 It’s worked out well for Ekkarin, who now practices Muay Thai alongside the trainers and fighters he employs. Fifteen trainers currently call Dragon home, as do seven active Thai fighters, most of whom are from southern Thailand and regularly fight in Bangkok.

They leave their shared rooms and hang out near the punching bags, cracking jokes with each other while the foreign students trickle in. Trainer Yai from Trang laughs as he points out a fighter to me, 27-year-old San from Phangna, who broke his nose at a fight at Rajadamnern Stadium last week. San’s nose is healing nicely and he’s in good spirits. It helps that he won the fight. 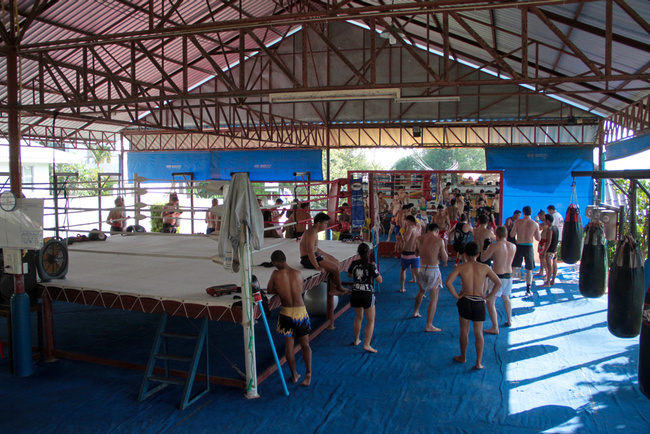 About 20 students from all over the world show up to afternoon training today. The four-ring gym can easily accommodate them all. Some live in the gym’s bungalows, others drop in. They usually stay anywhere from a week to a few months.

The gym’s Thai fighters, however, often live at the gym for a few years before moving on to another gym. Dragon is something of an intermediary gym for many Thai fighters. Young adolescent fighters will often come to Dragon from tiny gyms in their home villages, stay a few years developing their skills and ring experience, then transfer to bigger-name gyms, hoping for spots in Bangkok. Many Dragon fighters who make it to Bangkok still retain their Dragon fight name. “Like Khaosanit Dragonmuaythai,” Ekkarin says. “Last year he won Best Fighter of Channel 7. He was developed here at Dragon.” 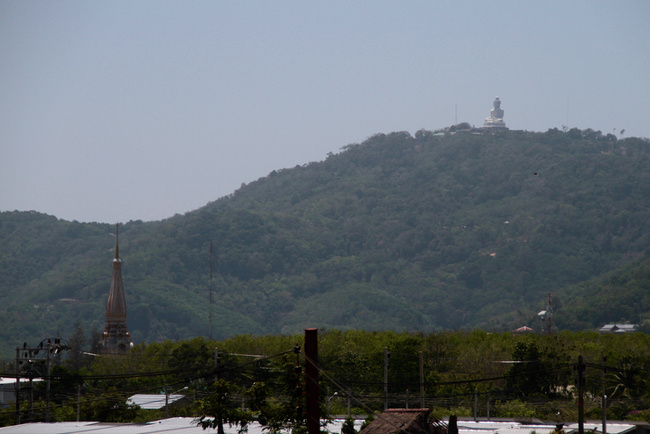 When asked about whether he’ll follow the examples of neighboring gyms and offer other martial arts in addition to Muay Thai, Ekkarin smiles slightly, furrows his brow and shakes his head. “We don’t have experience with those other kinds of martial arts. We love Muay Thai here, and Muay Thai only. We send fighters to fight in Bangkok,” he says, emphasizing Phuket Dragon’s role as a serious Muay Thai gym, not just as a fun place for foreign tourist-fighters to train on holiday.

Dragon’s Thai fighters may actively represent the gym in Bangkok, but the gym’s foreign students, from hobbyist to professional, are vital. “Foreign student training fees are what keep this gym running,” Ekkarin says. “We don’t take money from the Thai fighters’ purses. We really want to give them a way to help their families [by sending money home].” Ekkarin adds that Dragon doesn’t discriminate with fight purse policy: Ekkarin says foreigners keep their full fight earnings too. 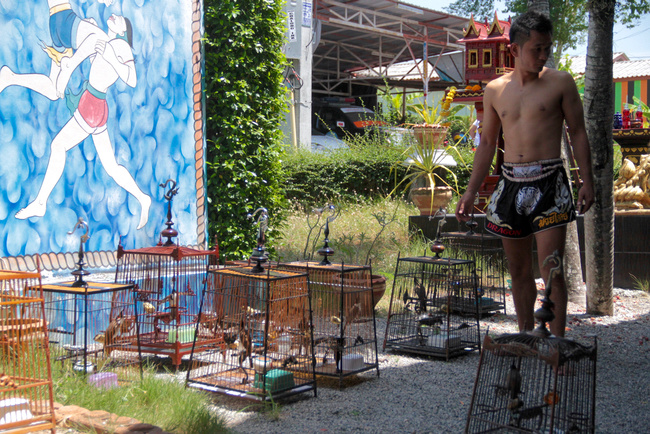 But it’s not totally traditional, of course. The bungalows out back are nicely decorated; the office is modern, with tinted sliding glass doors and air-conditioning. 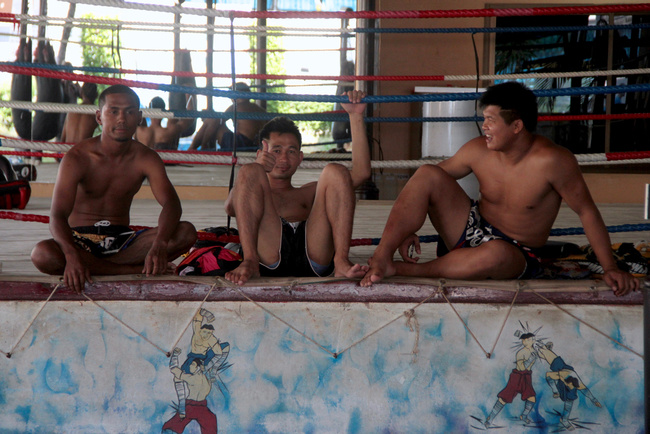 From the street the gym looks tiny, just an office and one-ring training area. But it extends far back, three more rings and a mirrored mats area, even a dozen guest bungalows off to the side. The Dragon coffee shop and restaurant is right next door, offering large portions for reasonable prices. Ekkarin’s wife often works in the kitchen, but it’s a team effort—Ekkarin himself brought us a couple of the dishes we’d ordered. 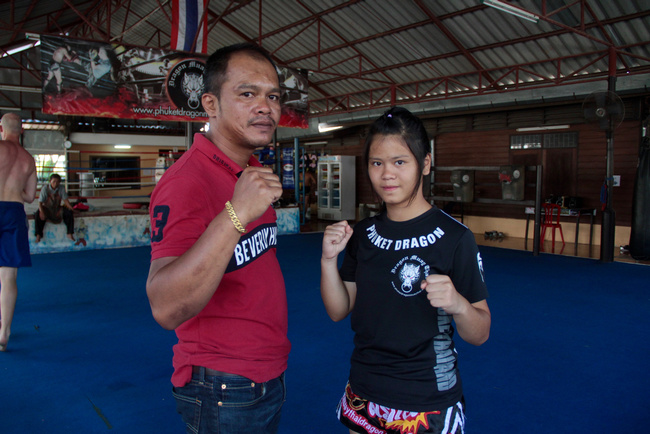 It’s truly a family effort—Ekkarin’s children are also part of the gym. His 14-year-old daughter Palm trains here too. Her fight name, Petchnamneung Dragonmuaythai, has graced the flyers of six promotions in the past year she’s been fighting. She’s been training half her life and loves her recent forays into the ring. By the way she joyfully kicks and punches the trainers in the downtime before they don pads for the foreign students, it’s clear this sort of girl will stick with Muay Thai for a long time.

Ekkarin’s four-year-old son is like a gym mascot when he toddles across the mats. He may well be a fighter too one day, just as his big sister Palm, their father, and their grandfather before.

The Female Fighters of Northern Thailand

Buakaw Banchamek and the Life of a Muay Thai Celebrity

High-Frequency Fighting and the Children of Muay Thai