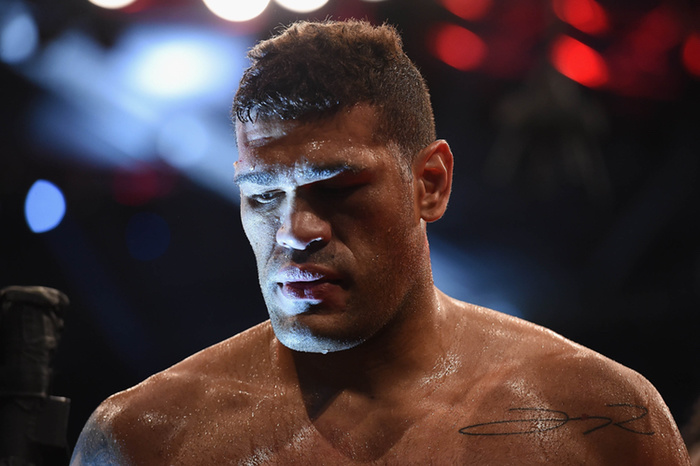 There was a time not all that long ago, when Antonio “Bigfoot” Silva was considered one of the most dangerous heavyweights on earth. His chin was sturdy. His power was legendary. His ground-and-pound, hammered down from top position, looked like it could shift the course of continental drift. He was a behemoth of a man with the skill and ferocity to hang with the best heavyweights on the planet.

How things have changed.

Today, Bigfoot is an undeniably terrible 1-7-1 in his last nine fights, with all but one of those seven losses coming by way of knockout or TKO. Given the severity of this slump, it should come as no surprise that he was jettisoned by the UFC some time ago.

The news that Bigfoot had been released from the UFC actually generated a collective sigh of relief from the MMA community. This was not only because the step down in competition he’d inevitably face would mean he was less likely to be knocked silly again, but also because he would no longer be competing in the jurisdiction of the United States Anti-Doping Agency (USADA), and therefore allowed to use the Testosterone Replacement Therapy (TRT) he is believed to legitimately need as a result of his Acromegaly.

Unfortunately, not even diminished competition and a TRT-boost could turn things around for Bigfoot. In his first fight outside the Octagon, the UFC veteran fought under the shadowy Titov Boxing Promotion banner, taking on Ivan Shtyrkov, an undefeated Russian prospect who was largely unknown to Western fans. Though Bigfoot nearly finished this fight with strikes in the third-round—and really only failed to do so because of blatantly corrupt pro- Shtyrkov officiating—he was dominated for the rest of the fight, and ultimately lost a unanimous decision as a result.

But hey, at least he’s not getting knocked out cold by top-level heavyweights anymore, right?

Not so fast. Bigfoot’s second fight outside the Octagon has now been confirmed, and it looks like it’s going to be a fucking nightmare for him. He will be competing under the Fight Nights Global banner in St. Petersburg, Russia on July 2. His opponent will be Russia’s Vitaly Minakov, who is far and away the best heavyweight outside of the UFC, and really, a man that could very easily be more dangerous than many of Bigfoot’s most recent UFC opponents.

A bit about Minakov, for those who are unfamiliar:

Minakov, who is the former Bellator heavyweight champion (he was stripped as the result of a contract dispute), is an incredible 19-0 overall. Records of this nature are uncommon in mixed martial arts. In heavyweight mixed martial arts, where one thunderous punch can end a fight in a blink, they’re nearly non-existent. Now, you might be thinking, sure, he’s 19-0, but he’s 19-0 against opponents outside the UFC. His record is probably padded with wins over all kinds of weekend warriors and washouts. Well, while there are certainly a few less than stellar opponents on Minakov’s record, he’s done a remarkable job of sniffing out the best opposition available outside the UFC.

Highlights of his sterling record include decisive defeats of names like Cheick Kongo, Alexander Volkov, Josh Copeland, and Eddie Sanchez, all of whom are former or current UFC heavyweights. He’s also defeated notable names like Geronimo Dos Santos, Peter Graham, Ron Sparks and Ryan Martinez. Sure, these opponents are not on the same level as Stipe Miocic, Cain Velasquez, Fabricio Werdum and Junior Dos Santos, but they’re about as stark as tests get outside the UFC, and Minakov’s emphatic defeats of them is a strong indication of the kind of destruction he’s capable of.

Unfortunately, Minakov’s ceaseless quest for legitimate opposition has now led him to the struggling Bigfoot, a fragile fighter who can’t even be referred to as a glass cannon because he no longer seems to possess the speed or firepower to put his foes away. All this to say, there seems to be a high probability that Bigfoot’s record grows by one more stoppage loss in the next few months. Could he pull off the upset? It’s certainly possible. This is MMA, and anything can happen, blah, blah blah....

Far more likely than a career-revivifying Bigfoot upset, however, is that his giant heart has written a check his body can’t cash, and that he is victimized by one of the most dangerous heavyweights on earth as a result.  The big question is, will you watch this near-certain slaughter, or will you avert your gaze and try to ignore the unpleasantness?