The Fighting Chefs of Philadelphia 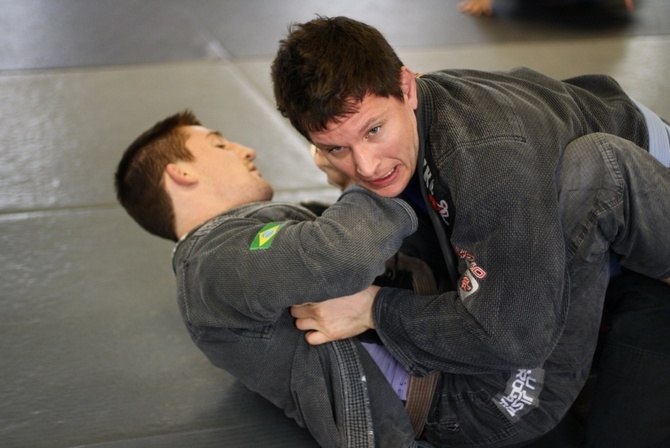 At Precision Jiu-Jitsu in King of Prussia, a suburb 20 miles northwest of Philadelphia, a square-jawed fighter approaches Marc Vetri, who's winded from four rounds of Brazilian jiu-jitsu and nursing a bad shoulder. He has a question about Italian meatballs.

"You cooked the food downstairs at the holiday party, right?" the fighter asks. "What were the meatballs made of? Beef?"

"Sal's old-school meatballs," Vetri says. "If you buy my book, the recipe's in there, man.” He grabs a copy of Rustic Italian Food that happens to be nearby (he’s signing it for another fighter) and flips to the right page. "Beef, veal, and pork," he reads.

Vetri is the head chef and paterfamilias of Vetri Family, a group of fine-dining restaurants across Philadelphia that monopolizes the awards circuit. Tonight, Vetri will be behind the line at his flagship restaurant in Philadelphia, putting the finishing touches on a plate of Texas antelope with delicata squash and amarone sauce, but today he’s rolling around in a jiu-jitsu gi trying to avoid being choked out.

Joining Vetri on the mat are two of his protégés from the kitchen -- Brad Spence, a stocky redhead who could pass for Mario Batali’s kid brother, cooked at Vetri and now heads up the small-plates restaurant Amis; Jeff Michaud, who still looks like a high-school quarterback, co-owns Amis and Osteria.

A couple of years ago, the three started training together at Precision, a gym run by Vetri’s old fraternity brother Rob Scheier, who studied with BJJ pioneer Renzo Gracie in the Nineties. Vetri brought his son in for kids' classes, and the three decided to jump in. “It started as a team-building sort of thing,” says Michaud, but now they’re training and rolling here twice a week. On Tuesday nights, Vetri hosts a “fight club” at his house. Michaud boxes on the side. They’re thinking of signing up for the next local grappling tournament as a team.

Guys like Anthony Bourdain have popularized the image of the chef as hard-drinking insomniac perfectionist who lives hard to diffuse the stresses of the kitchen. But Vetri, Spence, and Michaud are just dads looking for a good workout. “We’re not your normal restaurant guys who have to go out and drink,” explains Vetri. “At the end of a shift, we all go home and eat Raisin Bran and fall asleep watching the news.”

“Whenever we’re not here,” Michaud says, “we’re in the kitchen.”

For those who can’t help making a philosophical link between the pure manly arts of cooking and fighting, Michaud sees some commonalities.

Scheier calls the class to order. “Okay, we’ll warm up and do some leg lifts, some side-to-side,” he says “Then we’ll do some guard drills.” The students cycle through partners, stepping over one another on the mats to loosen up. Today they are practicing lying on their backs moving from closed guard, with their legs around the opponent’s waist, bringing the legs up over the shoulders and tugging the opponent’s sleeve to knock him off-balance.

Vetri’s kids -- Maurice, 6, and Mario, 2 -- are running around the gym. Maurice wears a blue gi and steps in to practice moves with some of the older students while Mario rambles around the ring with a toy truck.

Vetri’s shoulder is hurting, and Spence also has limited motion in his shoulder. They pair off -- the master and his student in the kitchen, now just two achy men on a mat – for a five-minute sparring round, with Scheier offering instruction from the sidelines. Vetri gets Spence down on his side for a minute but winds up sprawled underneath him again gasping for breath while Spence struggles toward a submission hold.

When class is over, Michaud ducks back onto the mats for a few more rounds of rolling while Spence and Vetri gather their gear and their kids, ready to head home to clean up and then back to their restaurants – to trade one exhausting, perfectionist discipline for another.

Spence gestures to the corner where Vetri is talking with some of the other fighters. “I thought those guys were talking about jiu-jitsu,” he says. “But I walked over there and someone’s going, ‘So what do you do with the eggplant?’”