The French Judo Federation Still Hates MMA. But, the Government Is Now Joining In 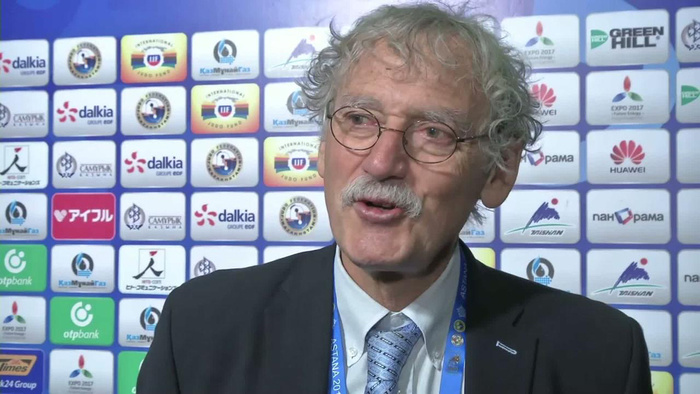 A mixed martial arts event in Paris, with both an Octagon and the Unified Rules in play, ran without a hitch towards the end of September. While that may sound an unassumingly average statement to you, it has resonated across central Europe.

In Layman’s terms, France is Europe’s equivalent to New York state. But, while the obscure Culinary Workers Union continue to meddle with MMA’s legislative acceptance in the Empire State, it’s a fellow martial art administration which is trying to shackle the sport’s growth in l’Hexagone.

The bizarre bureaucratic butting-in of both the French Judo Federation (FJF) and the International Judo Federation (IJF) has been touched upon on Fightland before. Rather than seeing MMA as the perfect advertisement of a martial art which borne international superstar Ronda Rousey, the IJF appear petrified of a potential talent vacuum which will see its stars flock to the fenced canvas away from the dojo. But, while many judo federations aligned to the IJF take a softer stance towards MMA, the French federation is the archetypal regional representation of the IJF’s anachronistic standpoint and have no qualms with going the extra mile in the process.

FJF President Jean-Luc Rougé, who also happens to be France’s first ever world champion judoka, has already made a pledge that any member of their 500,000 members-strong federation caught teaching MMA will be completely expelled from the FJF. He has also went the xenophobic scaremongering route of saying MMA was a “refuge for Jihadists” in France in his interview with Agence France-Presse (AFP)—a comment so outrageously backwards it will be hard to top in sheer absurdity.

However, despite the standardized version of MMA not having taken place in the country up until September 2015, it is in fact legal through the use of some lawful loopholes. While the aforementioned Culinary Union of Nevada has enough political clout to pressurize New York State into not following their fellow 50 states into allowing professional MMA to take place on its premises, the FJF’s approach to preventing MMA from blossoming in France is to publically bash and marginalize the sport to the point where fight promotions are reluctant to indulge in a political battle with the FJF and face such a torrent of bile from the country’s influential judo hierarchy.

Every villain has its foe and in this case it is Bertrand Amoussou, older brother of Bellator stalwart Karl. The 48-year-old Senegalese-born martial artist has competed in MMA himself and is a highly rated judo black belt in his own right. A man with many strings to his bow, Amoussou also happens to be president of the International Mixed Martial Arts Federation (IMMAF), Commission Française de Mixed Martial Arts (CFMMA) president, and the man who helped the unified rules reach the land of the Champs-Élysées in September’s historic MMA event.

Seeking a promotional coup, World Warrior Fighting Championship (WWFC) decided to take the plunge and host the Paris event. It went off without a hitch after earlier indications that the police would shut the show down. Instead, the authorities stuck around to watch some MMA action. The night most definitely appeared to be a win for Mixed Martial Arts , Amoussou, CFMMA and WWFC.

Expecting a public backlash, CFMMA released the following official statement after the event which reads:

"For the first time an event reported to the authorities was held under the Unified Rules of MMA. This sets a legal precedent. We now expect a reaction from the government. However last night it was shown publicly that the fighting is regulated, structured and sanctioned; that the fighters are professionals trained in the various techniques, including those used on the ground; that the audience are people who attend in a spirit of friendly sportsmanship.

“It is for these reasons that the CFMMA requests again that the state and its highest representative, Francois Hollande, legislate to recognize the existence of this sports discipline, and for it to be permitted under federal guidelines."

You’d be forgiven for thinking the country’s judo federation would be outraged at this and were itching to impart their words of wisdom on the unsuspecting French public. However, oddly, the FJF have been totally silent since September.

Instead, the hostile reaction to the fights was reserved for someone much more powerful. Thierry Braillard, France’s Secretary of State for Sport, used his platform to denounce French MMA’s momentous event: threatening both the promoters and CFMMA with legal consequences.

Braillard released a statement of his own which included the line: “One thing is for certain: these fights should have not happened” before adding the French sports code will prohibit any sporting events they deem to “affect the physical and moral integrity of the participants.”

Other Braillard articles, including this one hosted on Ammousou’s IMMAF website, indicate he took this event’s flouting of the rules personally before threatening to tighten combat sports sanctions in the country even further, saying:

“I do not like to be ridiculed. I do not like cheating.  I have also read provocations on social networks. I will not sit with my hands in my pockets, believe me. Our investigation will result perhaps in sanctions. We will do what it takes.”

“There is a debate around MMA and I am very open. It is a phenomenon to which we are not blind. But mixed style fights already exist in France. This is Pancrase, where submissions are authorized but not strikes on the ground. MMA is not recognized as a discipline. The state proposes even to toughen the regulation on some combat sports events.”

Braillard may say he is “very open” to the MMA debate. But, the sports minister is a big fan of the country’s judo program and often appears at the much-maligned French Judo Federation’s events so, as cynical as it is, this statement appears significantly flimsier compared to his threats to the future of French MMA.

So, it appears the French authority figures are still very much in the anti-MMA camp and that is unlikely to change any time soon. While the International Judo Federation and the French Judo Federation still look set to wage war on the combat sports relative newcomer, this is an approach resigned to only two leading judo bodies. USA Judo, for instance, actually came to a contractual agreement with the UFC in 2014 which will see the two organizations combine to support and promote the development of judo in the country: perhaps a direct result of the Rousey’s unrivalled and ever-increasing mainstream popularity.

There is no doubting how much importance WWFC’s history-making event will hold for decades to come. But, with a new, more powerful enemy in French sports minister Thierry Braillard now entering the fray, French MMA could well have bit off more than they can chew.