The Ghost of PRIDE: How Rizin Upstaged UFC Brasilia 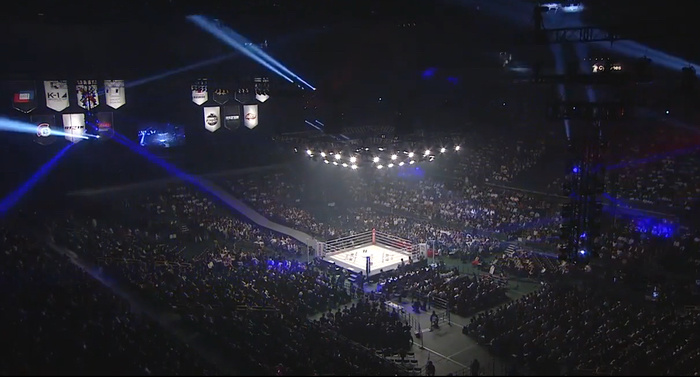 This weekend's UFC Fight night in Brasilia, Brazil was headlined by a couple of fairly obvious tune up fights. The number one 145lbs female fighter of all time took on a 6-1 opponent who was brought to the UFC specifically for the fight, and the former men's bantamweight champion, Renan Barao got a step down in competition in the form of the respectable Phillipe Nover. Antonio Silva versus Roy Nelson also went exactly as everyone expected, and everyone left feeling a bit sad that 'Bigfoot' is still competing. Those fights were alright, as fights go, but they were certainly nothing special. Oddly enough much of the real fun this weekend came on the card of the Japan's circus of MMA, Rizin Fighting Federation.

The best fight on the UFC's card this weekend was Francisco Trinaldo versus Paul Felder. Trinaldo is now 38-years-old and ageing like a fine wine. He is on a six-fight winning streak and just keeps getting savvier. Felder, a heavy counter striker who excels with intercepting knees, was drawn out with feints and the scrappy southpaw, Trinaldo, capitalized on Felder's overcommitments each time. Trinaldo's coach stressed this to him once again between rounds—feints made the difference and allowed the old man to manipulate the timing of the young buck.

A mistimed intercepting knee, and a missed right hook open Felder up as Trinaldo feints and capitalizes with left hands.

In the second round the two tied up momentarily off an exchange and Trinaldo waltzed Felder onto a beautiful outside trip into Felder's guard.

Beautiful timing and a change of rhythm.

Felder attempted to stall Trinaldo by using grapevines to stretch Trinaldo out and prevent him from posturing up. Unfortunately Trinaldo was able to free his legs, tripod and land short elbows, one of which opened the cut which would see the fight brought to an end in the next round.

The grapevines are a useful trick from guard to break an opponent's posture, which will allow a fighter to clinch and smother many of the more meaningful strikes, but grapevines can't typically be held for a length of time against good grapplers with an understanding of how to swim their legs free and to deny another attempt at the same. An example of a grappler who uses the grapevines from closed guard excellently is Nathan Orchard. Orchard will threaten with a sit up/hip bump sweep to get his opponent's butt off of their heels, allowing him to insert the grapevines and stretch them out as he goes back to the mat.

But Orchard immediately takes advantage of the opponent's broken posture by climbing up to what the rubber guard folks call 'Mission Control' with one forearm and one leg forming a high guard while his free foot posts on the opponent's hip.

Orchard then looks to triangle his legs over the shoulder in his 'Dead Orchard' position.

In this position Orchard is often able to extend one of the opponent's arms, sometimes over their other arm, and create an unorthodox armbar.

Obviously no one expects Felder to be hitting a Dead Orchard, but Nathan Orchard demonstrates the momentary value of closed guard grapevines when used to transition to a more secure upper body control. At any rate this was a terrific performance from Francisco Trinaldo and it's time to get that man a top ten-ranked opponent.

The real stand out star this weekend was Japan's Rizin. An event that markets itself almost entirely on PRIDE nostalgia and freak fights, and which is amazingly still in business despite agreeing to Fedor's multi-million dollar asking price. But Rizin boasted some of the most interesting happenings this weekend, and certainly the most exciting fight. Young Erson Yamamoto, of the infamous Yamamoto wrestling clan, competed in just his second fight against the 2-1 Kizaemon Saiga and both put on showings tactically and technically well beyond what you would expect from such inexperienced fighters.

Yamamoto came out moving like his old gym mate, Horiguchi, switching between long stances with a bounce and leading Saiga around the ring. When Saiga followed, Yamamoto was able to leap in with punches. Vintage points karate style stuff.

Meanwhile, Saiga showed that Kyokushin favorite, the sankaku-geri or 'triangle kick'. A front snap kick with the lead leg that travels up on a diagonal and is most successful when mixed in with front snap kicks and round kicks. The difficulty Saiga faced was in keeping the attack on Yamamoto's body up without getting overaggressive and allowing Yamamoto an easy takedown. Yamamoto, in true Japanese MMA fashion, hit a pair of suplexes in this bout when he got a hold of Saiga.

As more snap kicks landed, Yamamoto's hands began to droop and his body began to curve in anticipation of the ball of Saiga's foot hammering him in the gut. In the second round after a snap kick to the body sent him to the ropes, Yamamoto shelled up expecting another and instead received a jumping knee strike which sent him to the mat.

Yamamoto, like his uncle Norifumi 'Kid' Yamamoto, spent much of the fight in guard, seemingly landing there after every takedown and doing little to pass.

Saiga repeatedly clambered out of the ring or was pushed out between the ropes and this ultimately resulted in him dropping the decision. However this is largely Rizin's own fault—partly for using the ring in 2016, but more because they decided to ignore everything they learned from their last event. At Rizin 1 the ropes repeatedly got in the way of the action and two lads actually fell head first from the ring to the floor.

If a mixed martial arts promotion insists on using the ring, it should ensure that the ropes are tied together vertically in as many places as possible. At Rizin's first event the ropes of the sizeable ring were tied at just one place along each side, leading them to part easily when fighters pressed against them. At this weekend's Rizin card the ropes didn't seem to be bound together at all, and it was the job of the officials on the outside to try to hold the ropes together whenever the fighters hit them. You would think it would be obvious that ropes running parallel to each other will part under weight if they aren't stabilized vertically but apparently not.

Things got stranger when the lightweight Krazy Horse called out the middleweight Wanderlei Silva (who was in Kimura's corner), referring to a backstage fight which seemingly happened in his head while he was being choked unconscious by a Chute Boxe coach on camera. Strangest of all though is the fact that since his comeback Bennett hasn't been submitted, has only lost over the distance, and has heel hooked two of his opponents. This from a man famous for gassing and getting tapped out. Is Krazy Horse suddenly getting better?

Now the exploitative stuff that we readily criticize Bellator and the UFC for doing is just as bad in Rizin. Watching Kazayuki Fujita compete in 2016 was desperately sad. Watching Mirko 'Cro Cop' Filipovic arm triangle a 3-2 Hyun Man Myung was not at all exciting or entertaining. But there will always be fans who would rather watch their old favorites from the golden days fed a win. As exploitative and tacky as Rizin can be, they put on some entertaining fights and they actually displayed some fresh, exciting Japanese prospects in a country which has been hurting for young talent since the MMA scene began to atrophy in the years after PRIDE. Certainly this writer will be following the careers of RENA, Erson Yamamoto and Kizaemon Saiga with keen interest in the future.