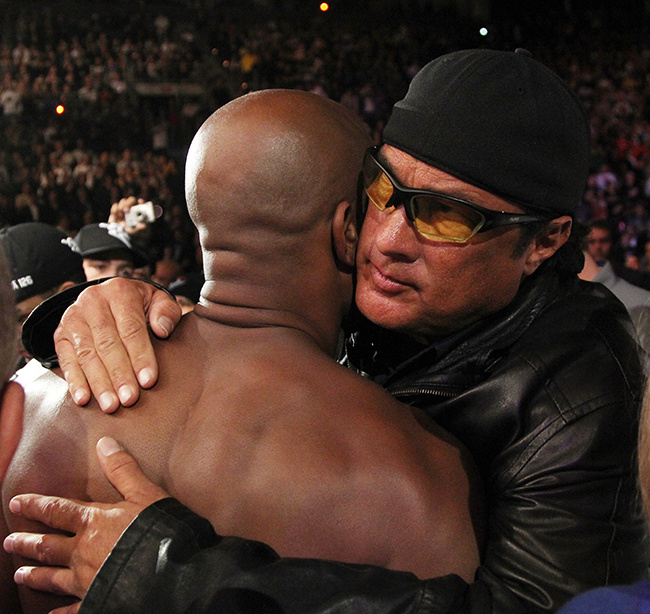 When I was working on Martial Art Pretenders: A History of Imitators and Snake Oil, I faced a challenge that no writer should have to face: distilling anything about Steven Seagal into a couple of paragraphs.

The Aikio master/ actor/ musician/ political activist/ UFC guru/ Baron Von Munchausen-like figure has had such a storied career and/ or a career full of stories, that pretty much every single thing about him defies a simple summary. So I successfully pitched another story that was just about Seagal and his fascinating exploits. I realized quite soon into the process that this was not enough, either.

Just as I was about to lose all hope, though, I recalled the way that director Francois Girard and his co-writer Don McKeller explored the life and time of the legendary Canadian pianist Glenn Gould in one of my favorite art house films from the nineties, 32 Short Films About Glenn Gould.

“As Gould was such a complex character, the biggest problem was to find a way to look at his work and deal with his visions,” Girard told The Film Journal in 1994. “The film is built of fragments, each one trying to capture and aspect of Gould. There is no way of putting Gould in one box. The film gives the viewer 32 impressions of him. I didn’t want to reduce him to one dimension.”

This, I realized, was the answer. Seagal is also a complex character. There is no way of putting him in a box, either. If you put him in a box, he’ll break out of the box. If you try to contain him in a straightforward story, you will fail. But, if you try to capture hints of his essence in a series of vignettes, you just might be able to present your audience with a fresh new look at an icon.

With that in mind, here are 32 short stories about Master/Sensei/Whatever Steven Seagal.

Seagal is a God.

As The Independent’s Matthew Sweet wrote in 1999:

“In 1997, high-ranking lama His Holiness Penor Rinpoche announced that the star of Hard to Kill (1989) carried within him the spirit of a 17th-century Buddhist master named Chungdrag Dorje. Seagal, he said, was a "tulku", a being who, out of his compassion for the suffering of sentient life, has been reborn to help all beings attain enlightenment. [...] The star himself had already demonstrated his commitment to the cause by making a generous donation to His Holiness's monastery.”

Seagal has a (somewhat) verifiable background in Aikido

“Steven Seagal is a 7th dan degree and Shihan in Aikido. Steven moved to Japan in his late teens and became the first foreigner to operate an Aikido dojo in Japan. Steven was trained by Harry Ishisaka and received 1st dan degree or Shodan under the direction of Koichi Tohei,” according to StevenSeagal.com.

This 1990 story from People magazine, which is fascinatingly investigative for such a celeb-friendly publication, offers a slightly different perspective.

GQ magazine ran a moderately critical profile in Seagal in their March 1991 issue called “Black Belt White Lies.” Seagal accused the writer, Alan Richman, of misquoting everyone he talked to, and of being a “5-foot-2 fat little male impersonator.”

The 5-foot-9 Vietnam vet Richman responded by saying “If I wanted to be mean-spirited, I would have done a better job. For example, I didn’t put in the story that Seagal said Jews run Hollywood and that most of his directors were incompetent, because I thought it was just more of his careless shooting off at the mouth.

Aikido master and UFC mentor Steven Seagal has heavily implied that action star JCVD is a fraud. Here he is saying as much on Arsenio Hall in 1991:

Seagal vs Jean-Claude Van Damme In The New Millenium

JCVD said some nice things about his sort-of nemesis (“He doesn’t like me, but I like him a lot”) Steven Seagal a few years ago. He also said that Seagal needs to lose weight, but he sort of meant that in a nice way, too.

Seagal attacked comedian/ actor John Leguizamo during rehearsals for 1996's Executive Decision for laughing at him. Or, as Leguizamo put it in this clip from CBC’s Q, “he Taekwondo-ed my ass.” (Trigger/ irony warning: Host Jian Ghomeshi sounding super uncomfortable talking about a violent confrontation.)

Here comedian Rob Schneider tells some of the most classic Seagal stories of all time on Howard Stern:

Seagal is passionate about politics

Much like fellow actor with a somewhat inflated sense of his current combat prowess Mickey Rourke, Seagal loves Vladimir Putin.

He is somewhat less fond of Barack Obama and has some lingering feelings about Benghazi.

Seagal vs Run The Jewels

El-P, one half of the genius hip hop duo Run The Jewels, recently spoke to The A.V Club about his fascination with the star’s work. “I love the fact that when Seagal tries to do good, it’s just him being brutal and a complete fucking asshole. I love the way that Seagal fails to be who he wants to be,” he says about Seagal’s action film characters in one of the greatest interviews of all time.

His partner, Killer Mike, states that he admires Seagal’s Aikido background in the interview, but he clearly isn’t on board with the rest of El-P’s vision.

Seagal vs Run The Jewels 2

El-P admits to writing fan fiction about Sticks, the pool hall henchman that Seagal defeats in 1991’s Out For Justice in that brilliant interview. Soon after the A.V Club posted it, he shared an excerpt on his tumblr.

Former UFC (and current Bellator) fighter Nam Phan told Ariel Helwani that he wanted to take on Steven Seagal and called the star a “douche” after winning his fight at UFC on Fox 4.

On a side note, watching those two men discuss Seagal is like watching MMA’s answer to Harvey Korman and Tim Conway breaking up on The Carol Burnett Show.

Seagal vs the chickens

Seagal and his law enforcing team allegedly ran over a chicken coop, and murdered a bunch of roosters and a puppy while filming his reality show, Steven Seagal Lawman.

The A.V. Club highlighted the unfortunate parallels to Out For Justice in their coverage of the fiasco.

I worked a Canadian music event back in the day where he refused to leave NSYNC’s dressing room. It was really awkward for everyone involved who was not named Steven Seagal.

The Aikido master visited Light Heavyweight contender Daniel Cormier in the days leading up to his fight against champ Jon Jones at UFC 182 and showed him, to quote Seagal himself, “some things that are unusual.” He also accompanied Cormier to the cage on the night of the fight.

The star wanted to visit Light Heavyweight champion Jon Jones before his fight against Rampage Jackson at UFC 135, but Jones refused.

“I don’t want to badmouth him. He had good intentions, I think,” Jones later said on the The Jim Rome Show. “But yeah, I definitely wasn’t having Steven Seagal in my corner. I could see if it was Jet Li or something. I mean Jet Li would be pretty cool.”

As Seagal told Helwani after the fight, he was not impressed by Jones’s subsequent performance. He also dropped the truth bomb “All time is a long time.” And the not so truth bomb that he talked to Jones about the front kick and that “he’s a kind of a friend.”

Seagal and Silva Were In a Commercial Together

There’s a good chance this is what the Silva training video above looks like in Seagal’s head.

It must be true, because he said so himself.

Silva has since admitted that it didn’t really go down that way.

Seagal vs the letter of the law and feelings

Before UFC 148, a distracted Steven Seagal told Ariel Helwani that he taught Silva “stuff that we thought was maybe illegal that’s not illegal and stuff like that” and that he told Silva to be more mean to prepare for his fight against Chael Sonnen.

He also claims to have taught him the front kick and taken credit for Machida’s win against Randy Couture at UFC 129. And Machida did give him some props for an unspecified detail he added to the move.

Some sources, like Men’s Fitness, believe it and ran with it. Others, like Vitor Belfort’s coach, Jayme Sandall, are not so convinced.

Randy Couture playfully challenged Seagal to a fight. Seagal didn’t get the joke and offered to fight Couture in a place where there were no witnesses. Couture then clarified that he was joking because his hypothetical gag opponent is not a man of nuance.

The UFC women’s Bantamweight champ thinks that Seagal is full of shit.