The Heavy Hands of "Bigg Rigg" 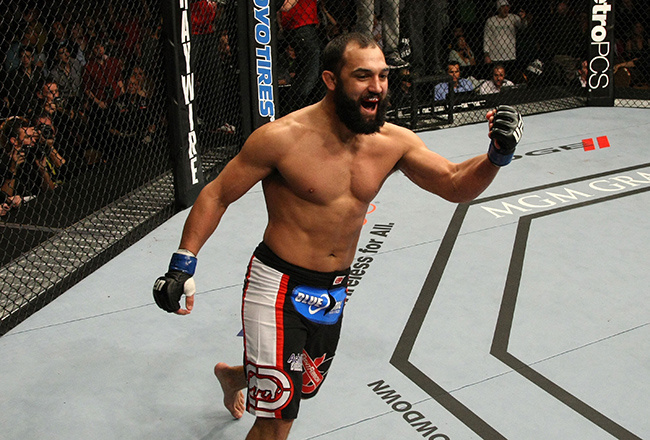 It’s counterintuitive that a fighter who came to MMA via collegiate wrestling would have only one submission win and yet have such devastating power behind his fists that seven of his 15 professional victories would come from knockout punches. Watching how little effort the southpaw Johny Hendricks seems to exert when throwing his left hand, it makes even less sense. He flattened Martin Kampmann at UFC 154 in 46 seconds with a tap to the chin and laid out the previously iron-chinned Jon Fitch with one punch in a contest you could have missed in the time it took to eat a handful of popcorn.

And after winning a unanimous decision over Carlos Condit ealier this month at UFC 158, a knockout may very well be how Johny Hendricks halts Georges St-Pierre’s win streak at 11 to take the UFC welterweight title. Not that he needs to, as he demonstrated in that Condit fight and his six other decision victories. In fact, during his most recent win Hendricks thought he’d disabled his most powerful weapon with a fracture when he got it caught between Condit’s leg and the cage during a takedown. (He now believes he merely dislocated a finger and managed to pop it back into place later in the bout via an underutilized medical technique: continuing to punch with the afflicted hand.)

“Wrestlers tend to have bigger legs, bigger hips and butt and a stronger back,” he says. “Combine all those things, and what really makes you throw punches are your legs and your butt. I think that’s really where my power comes from, that ability to make those quick hip movements. In wrestling you have to react in seconds, in a blink of an eye. That’s the same in fighting: Your hips have got to be able to react on their own. I think that’s one reason I can hit so hard. I just let my body take over. I let my eyes see what needs to be seen and I let my body react the way it needs to react.”

But the main reason it looks like Hendricks isn’t really exerting himself that much when he lands a KO punch is this: He isn’t. Crucial to his knockout blows is accuracy. That vision and speed, his ability to take things in and react quickly, helps him target punches just where they need to go.

“You don’t have to hit someone that hard to knock someone out,” he says. “The way that I hit people, I don’t hit them that hard. I hit them 80 percent, just like training. What I do is I really focus on the accuracy part. If you move your head, I still want to be able to hit you. If you lean back, I still want to be able to touch you. I think that’s the most important part. No matter what happens, whenever I throw a punch, I at least want to get close enough that they have to respect it.”

Going into MMA, the two-time NCAA wrestling champ had speed on his side but knew he needed a striking game to gain respect in the sport. He spent a year studying boxing and kickboxing with Ron Frazier in Las Vegas before he felt ready for the cage.

Hendricks’ coach, Team Takedown head Marc Laimon, emphasizes that Hendricks’ fighting is well-rounded enough that it’s not necessarily going to take a left-handed bomb to knock out St-Pierre, who is favored by Vegas but not by a huge margin. St-Pierre has looked winded in later rounds, he says, and the world hasn’t yet seen the extent of his student’s ground game. (For his part, Hendricks says he is just as ready to go for or defend against a takedown as he is to lay GSP out with a punch.) That said, Laimon readily acknowledges that Hendricks’ heavy hand could be key to upsetting GSP.

“[St-Pierre] is hittable, and if he’s hittable and Johny’s able to put his left hand on GSP’s face, we’ve seen GSP get dropped with kicks and punches before,” Laimon says. “Matt Serra was able to knock him out and finish him. I think Johny Hendricks has that same chance given the same opportunity.”

Laimon also compared St-Pierre to NFL running backs like LaDanian Tomlinson, who manage to burn brightly for a few seasons but fade quickly, admitting he's the more polished athlete in comparison to the rawer Hendricks but also noting that GSP is “getting up there in years.” (That last jab could have been tongue-in-cheek, as the 29-year-old Hendricks is just two years St-Pierre’s junior.)

While Hendricks credits his wrestling-built lower-body strength for his incredible hitting power, Laimon refuses to paint all wrestlers with the same brush, even if other former grappling standouts like Dan Henderson have uncanny slugging strength.

“I don’t think you can lump just wrestlers in with wrestlers, because each wrestler is a unique individual,” he says. “They have so many different attributes that they bring to the table. Ben Askren is a wrestler, but he doesn’t look like he has any punching power. I think it comes down to the individual athlete as opposed to just saying, ‘Oh, wrestlers.’”

Laimon does agree with Hendricks that accuracy is a big factor, saying he aims for an opponent’s neck to compensate for a targeted man’s tendency to duck. First and foremost, though, Laimon says Hendricks is just remarkably strong, packing strength typical of a heavyweight into a 170-pound frame with exceptional speed multiplying the force of each blow.

The Psychology of Submitting