The Hollywood Gangster, The Fix, and the 'Man Mountain' 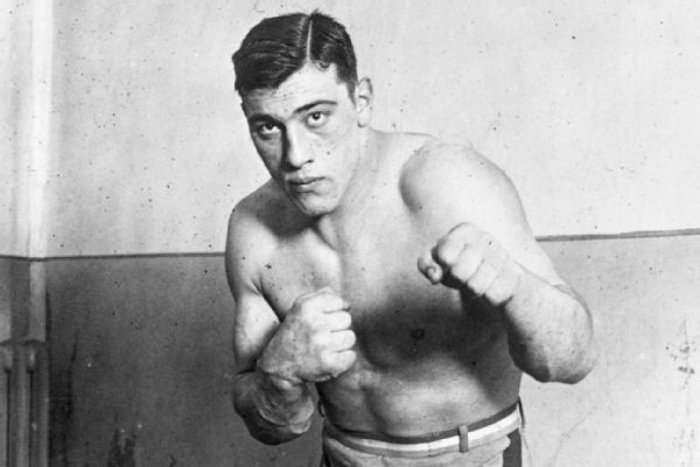 Standing 6 feet 6 inches tall and weighing in at 260lbs, Primo Carnera was an imposingly large man by any standards—but in his native Italy, he was a giant. Said to have weighed 22 lbs at birth, the Carnera family soon realized the potential of their broad-shouldered son—both as a laborer and a local attraction. In the early 20th century, rural Northern Italy was beset by deep poverty, and the Carnera family—little more than peasants—did their best to ensure that their son earned good money. By the age of 18, Primo had worked as a farm hand, and a circus strong-man. But those humble origins hardly left him well-equipped for the limelight—and they left him even less equipped to be the beneficiary of one of the most crooked title fights in heavyweight boxing history.

In 1947, a longtime boxing columnist published a slim novel about prizefight corruption entitled The Harder They Fall. The author, Budd Schulberg, was also a screenwriter and son of a movie magnate—making it the perfect material for a Hollywood adaptation. The story concerned a giant foreign heavyweight who is taken advantage of by hustling fight promoters and gangsters—unknowingly sent into fixed fights and having his profits quietly siphoned away by his greedy entourage. In truth, it was a thinly-veiled retreading of the Primo Carnera story. It was finally committed to film in 1956, with a starring role for Humphrey Bogart as one of the men who helps to con the young boxer. 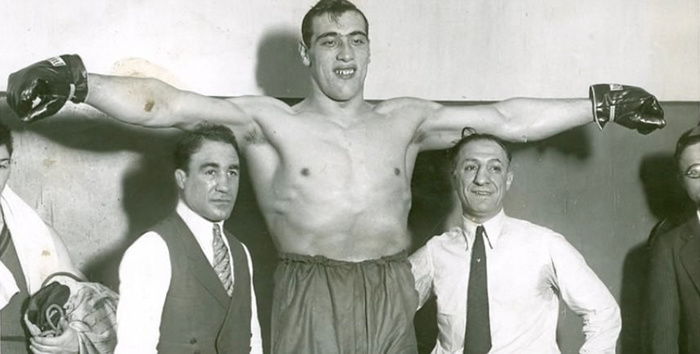 So Primo Carnera, like his loosely fictionalized screen iteration, was surrounded by ne’er do wells and thieves—and likely with much less charm than Bogart. After arriving in the U.S. around 1930, he triumphed mainly by KO in 89 of 103 professional fights. But he had risen to the top through behind-the-scenes corruption—opponents were bribed, physically intimidated, or susceptible to any number of dirty tricks. Carnera’s American management team were a veritable rogue’s gallery of gangsters, sporting nicknames like Vincent ‘Mad Dog’ Coll and Owney ‘The Killer’ Madden. Their presence seemed to make up for his lack of skill; he had something of a glass jaw, felled by even the lightest tap to the chin.

His size became his key defensive trait; and his clumsiness made his climb to the heavyweight championship all the more absurd. It never made him a popular fighter, yet he always drew crowds—even when it seemed obvious that his fights were fixed. Carnera’s shaky English and oversized appearance gave him the reputation of a dumb oaf—and the newspapers nicknamed him the ‘Ambling Alp’ for the way he staggered around the ring. So what differentiated Carnera from every other two-bit bum who’d take a dive in those days? He never knew his fights were fixed. He thought he was winning on his own. And so his magical rise to the title fight went nearly unhindered—with a little help from his conniving team. 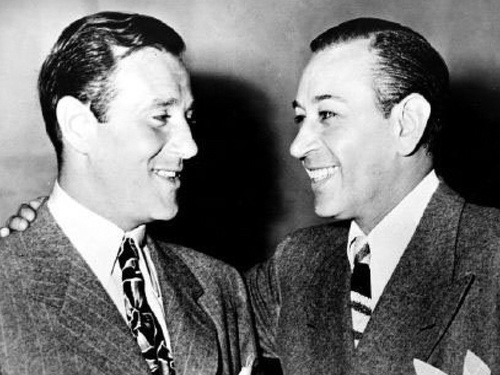 Amazingly, one member of this team was a movie star on the make named George Raft. In 1932, the NYC native was given a breakout role in Howard Hawks’ classic Scarface: Shame of a Nation. He plays the big-time gangster’s right-hand man—a role, it turns out, that Raft was well accustomed to in real life. Around the time of Primo Carnera’s rise, Raft had one foot in Hollywood and one foot firmly back in the New York underworld where he’d been raised. His lifelong friend—Owney Madden—was a murdering, bootlegging Hell’s Kitchen gang leader with a tight grasp on the city’s illegal rackets. This included prizefighting—and Raft, who had once dabbled in boxing (with a woeful career as a substitute, where he lost 10 of his 21 fights by KO), was a natural choice to help out. He could slip into the Madison Square Garden dressing rooms relatively unnoticed, and later told the story of how he did so one night in 1930, prior to a Carnera bout.

As Raft’s biographer James Robert Parrish tells it, Carnera’s opponent that evening—‘Big Boy’ Peterson, another oversized contender—refused to throw the fight. Owney Madden’s vested interest in his Italian fighter—not to mention all the money that had been wagered on his win—meant that this was a major problem for the criminals who handled Carnera. Raft was the perfect one to fix the problem; and so he slipped into Peterson’s dressing room, chatting and laughing. Somehow, he managed to spike the fighter’s drink. Peterson came into the ring so woozy that Carnera knocked him out in the first round. It was in this way that George Raft, the dapper onscreen tough-guy, helped Primo Carnera make a spectacular Madison Square Garden debut.

By the time of this incident, Raft had done worse things than tamper with boxing matches. He’d grown up rough in the tenements of turn-of-the-century Hell’s Kitchen, running with a vicious street gang. So established was he in the criminal underworld, he later accommodated Bugsy Siegel in his Hollywood home. He later said of his upbringing: ‘In my neighborhood, a boy without a knife was like Babe Ruth without a bat.’

It was under similar conditions that so many other fighters lost to Carnera. Some were known to agree to ‘arrangements’, some were fined for lack of effort, and most were viewed with at least a bit of suspicion. Finally, on 29 June 1933, Carnera’s shot at the title had come. The man to beat was Jack Sharkey—a well-liked heavyweight champ who had the distinction of being the only fighter to ever face both Jack Dempsey and Joe Louis. He and Carnera had clashed once before, back in 1931. Although the Italian had dwarfed his opponent, Sharkey dominated throughout—ducking and weaving as an unsteady Carnera wobbled like a mighty tree in a hurricane. For their second bout, a crowd of 40,000 gathered in the Garden, and Carnera was not about to be walloped again. He had developed considerably since he’d started his career, and had some awareness of how to use his size to his advantage.

By the 6th round, Carnera’s reach seemed to be genuinely getting the better of Sharkey, opening him up to uppercuts from the Italian. But Sharkey landed several impressive right-hand blows throughout—until a clean uppercut from Carnera put the champ flat on his face. Thus, the ‘Ambling Alp’ became the heavyweight champion of the world.

Sharkey insisted for the rest of his life that it’d been a fair loss, but even his wife had her doubts. Still, if it was a fix, it was a convincing one. Many believe that Sharkey was actually fairly beaten by Carnera—a disgraceful loss for Sharkey, bearing in mind that his opponent was hardly of championship caliber. In the fight footage, you can see the joyous Carnera lifting an unidentified corner man off his feet like a rag doll in a celebratory embrace. Fight fans still debate today about the legitimacy of the much-contested win.

Carnera maintained his belt for just under a year—and in many ways, his celebrity eclipsed everything else. His snaggle-toothed grin had graced the cover of TIME magazine; he turned up playing himself in a Hollywood film, The Prizefighter and the Lady. Co-starring was future opponent Max Baer. Even as champ, Carnera struggled with money—likely due to his crooked benefactors—and was forced to declare bankruptcy. So when he defended his title against Baer in June of 1934, it was more for profit than pride. 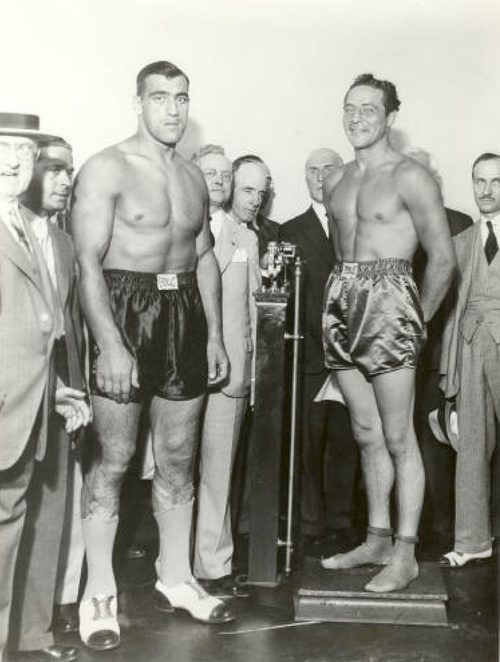 Carnera (left) and Max Baer at the weigh in

Baer was an aggressive crowd-drawer, making for an exciting title fight. But the end of the first round, he had already crumpled the big fighter against the ropes—scrambling Carnera’s brains for 9 more rounds before the fight was stopped and Baer won by TKO. It was a brutal beating, with Carnera hitting the canvas at least 10 times. 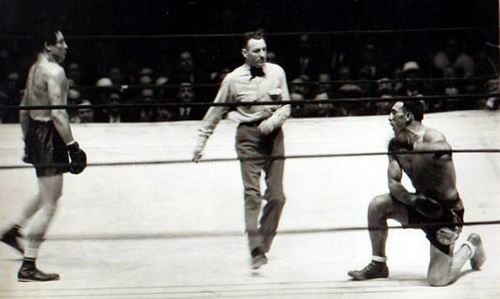 It didn’t take long for Carnera’s already dire financial situation to grow worse. Owney Madden, his long-time benefactor, dropped the fighter, sick of defending him against reporter’s claims of crookedness. He fought and lost several further fights over the years. His health, exacerbated by his gigantism and poor eating habits, forced him to retire in 1938, aged 32. He returned to Italy with kidney problems and diabetes—and next to no genuine profit in spite of all of his fame. He did make something of a comeback, starring in several Italian films—and he maintained a successful career as a professional wrestler in the 1950’s.

In his heyday, Carnera had been the ‘ambling alp’ and the ‘man mountain’—a larger than life character in every sense. Combined with the intrigue and tragedy that marked his life, he fit perfectly into the world of movies. He inspired then, starred in them, and even had bonafide movie stars like George Raft around to ensure his success. In 1956, when The Harder They Fall was released—Carnera filed a lawusit against Columbia Studios. He claimed the film was damaging to his reputation—and to add insult to injury, Max Baer had a role in it, playing out a fictionalised version of the battering he had given Primo. He lost the suit and was never compensated for the life story which had so clearly been borrowed in the movie. Viewed now, The Harder They Fall is deeply pessimistic. One promoter grumbles, ‘There’s no real fighters anymore. They’re all actors. The best showman becomes the champ.’

Never were truer words said of the unfortunate Primo Carnera.

Gypsy in the Ring: The Brave Life of Johann 'Rukeli' Trollmann