The Impresario of Women's MMA 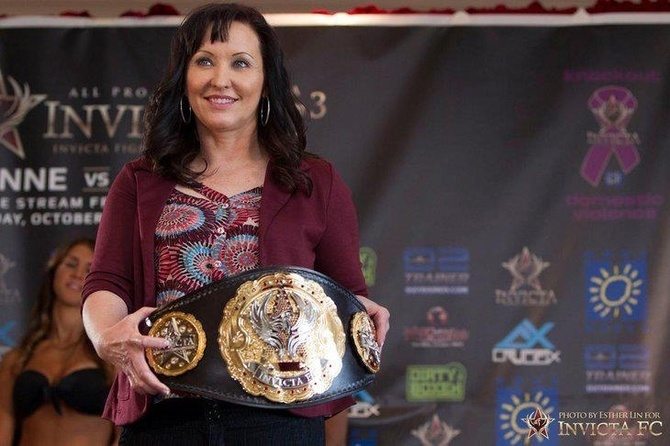 By now, this weekend’s UFC fight between Ronda Rousey and Liz Carmouche has been called "historic" so many times it feels less like a mixed martial arts event than a societal shift toward truth and righteousness: The Rumble in the Jungle recast with Rosa Parks in one corner and Pussy Riot in the other. But one woman who’ll be watching in Kansas City remembers where women have been in this sport and has good reasons for wanting the fight to finally bring attention to a long-marginalized branch of MMA.

Shannon Knapp started Invicta, the first and only women's-only MMA promotion, with her business partner, Janet Martin, in 2012. Having spent 13 years in the business, including time spent matchmaking for the now-defunct Strikeforce, Knapp had seen firsthand how hard women fighters had to struggle for a place at the MMA table. There were many men who took offense at the very idea of a woman "stealing" a spot on a card from a man. So when Strikeforce went down, she heard from a lot of worried female fighters who weren’t sure if there was anywhere left they could get a fight.

“There was a real concern ownership was not going to let them in,” Knapp told me over the phone from her base in Kansas City, Kansas. “The reason it wasn’t moving forward for them was there was not a platform to provide legitimate weight classes.”

For the most part, women fighters have been relegated to what Knapp calls the “weekend gardeners” – small, local promotions that weren't concerned about who they’d match a women against, if they bothered to put women on a card at all. If women wanted an audience, they’d have to take any fight they could get, which meant a glut of mismatched fights between women of different weights and skill levels who never should have been in a cage together. It’s hard to build respect with a shoddy product.

“It was just the money,” Knapp says. “No one wanted to put up the money. All any of these women needed was a platform.”

Knapp and Invicta took a “if-you-build-it-they-will-come” approach to getting a promotion up and made sure that when they scouted for talent they focused on fighters' skills, not their sex appeal. “We don’t look for pretty girls,” she says.

The rest was up to Knapp’s talents as a booker and the hope that the women who were supposed to be there would be there. After so many years in Strikeforce, Knapp knew that a good event on paper doesn’t guarantee a good event. An injury here, a substitution there, and your card ends up being five names removed from the names you sold the card on. So far, that’s not a problem she’s had in Invicta.

“With women, they come to fight,” she says. “We’re in a male-dominated sport.  But I think women are more emotionally connected to the fight. They’ll fight just to show up. Even the way women get on social-media platforms to promote it, you can see how they’ll push it more than the men will. And even bigger, you can see the connection they have in the fight. It’s much more emotional than I saw working all those years with men in their performances.”

Promotions rise and fall so quickly it’s hard to know who’s going to last. But considering the success Invicta had in 2012 it seems like a good bet to be around for a while. Streaming shows for free on the Web, the promotion had 237,000 viewers for their first card alone, and the numbers have only gone up from there. Coming up on Invicta 5 the promotion is easily breaking 300,000 IP addresses, with who knows how many eyes on the other end.

“It was beyond anything I hoped for,” Knapp recalls of the launch. “The next morning when the numbers were all in they came to me and were like, ‘Are you sitting down?’ I never expected to do so well so soon.”

The formula has been so successful that Invicta’s last event, and its first attempt at a pay-per-view, was so popular that the servers overloaded and the promotion ended up having to give the event away for free and offering refunds to anyone who paid.

Invicta has yet to book a deal for wider distribution but there are rumors the company could sign with a cable channel in the near future. Knapp will only say that there are ongoing “open dialogues” and a promise that the business will keep itself based in Kansas City at least through 2013, regardless of any successes it has in the meantime. Which is good because, having spent five years in Kansas City, I can attest that if anyone needs a local franchise to root for, it’s those miserable bastards.