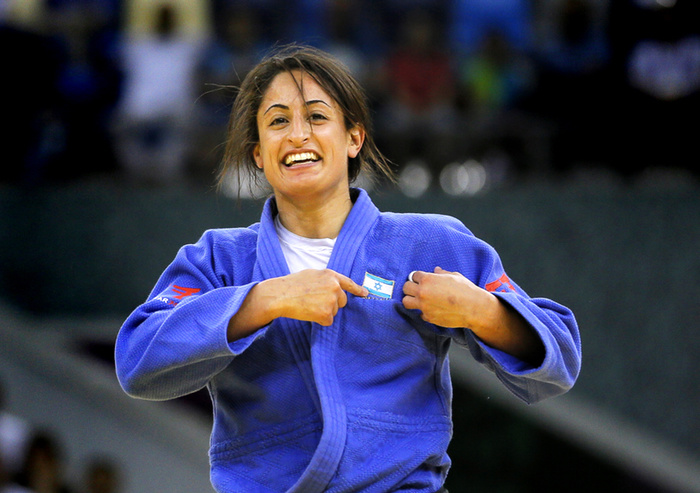 Yarden Gerbi of Israel reacts after winning the bronze medal at the Baku 2015 European Games in Baku, Azerbaijan, in June of this year. (Robert Ghement/EPA)

You can almost picture them. Eight grown adults in their judo gis, barefoot, like children ready for bed at a pajama party, innocents unwittingly playing a part in a never-ending absurdist play that’s unfolding around them, choking them and swallowing them up. Olympic-caliber athletes aren’t usually political creatures; they’ve been raised since birth to be great at one thing, like concert pianists, and excellence like that doesn’t suffer distraction gladly. So the eight members of the Israeli judo team stood there passively last weekend in that large gymnasium in “enemy territory”—only because others gave it that title over many decades, politicians and editorialists and other rabble-rousers—in their judo gis, itching to compete but only begrudgingly welcomed by the event’s hosts and not allowed to wear the flag or the abbreviation of their country on their uniforms, not allowed to proclaim that they’re fighting for Israel at all: their home, for better or worse. Instead, they fought on behalf of the International Judo Federation. That was the deal made at this late hour in the Arab/Israeli conflict, the absurd concession. How bland and bureaucratic and lifeless, how entirely without meaning yet how entirely fraught with it.

“Fraught” is the only word for their predicament, these Jews from a Jewish homeland fighting in a judo tournament in an anti-Jewish place. All because of a series of historical incidents and calamities they had no say in, most of which they weren’t even alive for! The UN’s Partition Resolution, the Six Day War, the Yom Kippur War, multiple intifadas. This isn’t their business. Their business is judo. This goes for their opponents as well, many of them Arabs and caught up in their own version of the same historical calamity.

Karl Marx once wrote, “The tradition of all dead generations weighs like a nightmare on the brains of the living.” The members of the Israeli judo team must be feeling that sentiment in their bones today, two days after competing at the Judo Grand Prix in Abu Dhabi as “stateless entities.” And that was a concession just to get in the door. Originally the United Arab Emirates, which does not have formal ties with Israel, was not going to let the Israeli judoka compete at all. All that “us versus them.” All those punishments for other people’s sins. All that weight pressing down, that maniacal weight: those hundreds and thousands of years of inherited mistrust and hatred bearing down on their chests, suffocating them, coming from “their” side and the “other.”

This sort of thing is becoming depressingly commonplace for the Israeli judo team. This past May they nearly missed the World Masters Judo Tournament in Morocco after their passports were confiscated. Reports said that the team was forced to spend nine hours in the airport and that members of the crowd chanted “We will murder you” when they finally got to the arena in Rabat.

A few weeks ago UFC featherweight Conor McGregor got in a row with some Irish fans online when he was photographed wearing a poppy, a flower often worn by citizens of countries in the Commonwealth of Nations (made up primarily of territories of the former British Empire) to honor soldiers who died in the line of duty. Some saw McGregor’s decision as an act of support for the British and told him so (though not to his face). McGregor, freeborn man that he is, lashed out with all the proper indignation of the artist/athlete struggling to breathe in the world and to get out from under all that weight and tradition, to live unbounded by ancient symbols and signifiers.

“I don’t need a stupid little flower with a 100 different meanings to tell me if I do or do not represent my country,” McGregor wrote on Facebook. “Fuck you and the Queen.” To quote another great Irishmen, this one fictional (though not fantastical like McGregor), “History is a nightmare from which I am trying to awake.” It’s the cry of every creative spirit struggling against the blind, deaf, and dumb weight of historical and political inheritance, from Tipperary to the Golan Heights. The Judo Grand prix in Abu Dhabi was just the latest battlefield in an endless war on the individual and free human spirit.

"It's not just us by the way, there are lots of people who serve the state of Israel and hide their Israeli identity [abroad],” the Israeli coach Shani Hersko, said after his team’s experience in Abu Dhabi that past weekend. “It isn't an issue just of sports. The state of Israel has a problem, and to come put the responsibility on us to solve it is a little too much."

How exhausting it must all get, how boring and tedious, banging up against the same unchanging hatred all the time, from the time you’re born to the time you die, their side and our side, how dead and unmoving and blockish and devoid of anything resembling life, the life that bubbles up from any true artist during the throes of creation, the life that only exists when the individual soul is free to move where it wants and express itself as it needs, through paint, through poems, through hip-tosses or kicks to the face.