The Karate Hottie Returns: Michelle Waterson on Defending Her Title at Invicta 10 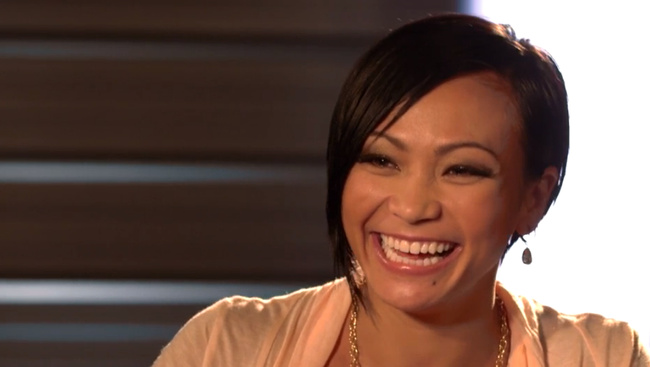 Michelle “The Karate Hottie” Waterson was ready to hit the ground running when she defeated Jessica Penne with a stunning come-from-behind armbar to win the Invicta FC World Atomweight Championship at Invicta 5 on April, 5, 2013, but she had to wait over a year for her first chance to defend the belt.

The undesired hiatus was upsetting for the fighter and young mother. “Especially as a fighter trying to support a family, you start having a little self doubt and trying to figure out if this is something that you’re really going to be doing as a career, or do you have to go out in the world and get a real job to support your new family?” Waterson says of her mindset during that time.

Waterson also began to consider extending her time off and adding to her family by trying to get pregnant again, seeing as how she was out of commission, anyway. But her coach, Greg Jackson, convinced her to keep training and developing her skills. She did as he suggested and the results of that time are starting to pay off now.

On September 6, 2014, Waterson was finally given her first title defense, and the gains she made during her time away were immediately evident. Looking stronger than ever – she also used that time to work on her body composition and put on more muscle – the 28-year-old fighter calmly and carefully picked apart Japanese veteran Yasuko Tamada before scoring a TKO in the third round and successfully retaining her belt.

And now she won’t have to wait another year or more to do it all over again. When Cris “Cyborg” Justino was forced to step down as the headliner for Invicta 10 due to an ankle injury in late October, Waterson was asked to fill in and she jumped at the chance to get another fight in before 2015.

Her opponent in this headlining Atomweight Championship match will be Herica Tiburcio, a hungry young Brazilian fighter with a dangerous ground game and a desire to make a name for herself Stateside.

We talked to the champ about her plans for Turbicio, her future with Invicta, and the Teenage Mutant Ninja Turtles.

Now you’re returning to action three months after your last fight. Is this a better pace for you?
Yeah. This is probably the fastest turnaround I’ve ever had in my career but I’m excited to take on the challenge and I’m excited that Invicta’s keeping me busy.

In this months leading up to your fight against Yasuko Tamada, you said that your goal was to showcase your skills and ability a little more so that you could solidify your presence in MMA. How do you feel that’s coming along now?
Well, I’ve only had once fight since I set that goal, and I feel like I was able to do so in my last fight and hopefully I can continue that streak.

You also mentioned at that point that you had two fights left with Invicta, which makes this the last fight on your current contract.
We’re in renegotiation for a new contract, so I’m good with Invicta for a while. 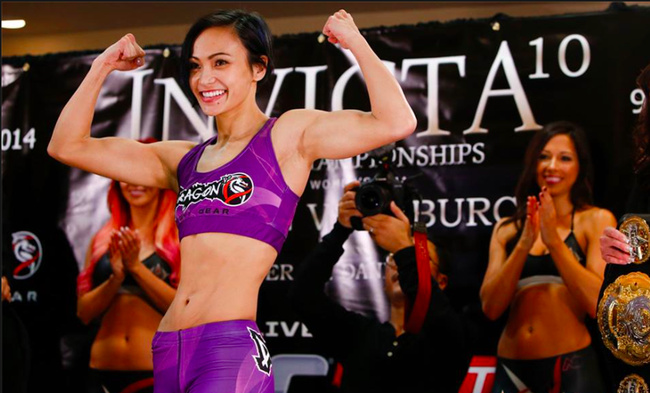 Now let’s talk about your fight. Herica Tiburcio has a really strong BJJ background and her striking, while not her strongest asset, isn’t exactly insignificant. What do you have planned for her?
I’d like to keep it standing and see if she can hold her own there. She’s coming to try to get my belt and I’m not gonna make it easy for her. So I guess I can just leave it at that.

I think the fight’s going to be a really interesting clash not just of styles, but of philosophy. In her fights, she strikes me as a little impulsive, especially when she’s going for a takedown, and your last fight was a clinic in calm precision.
Yeah. And I feel like, because she’s so relentless in her attack for the takedown, I think it’s going to lead to a lot of good scrambles and if she wants to take it to the ground, she’s really going to have to work for it. But that’s what we’ve been working for and, whether it’s stand up or if it goes to the ground, it’s going to be exciting.

During your hiatus, you kept an eye on the production of The Ultimate Fighter 20 and used it as motivation for your own training. Now that you’re back to fighting regularly, are you still able to keep up with the show?
I do, and I’m really excited for the girls. I think they’re doing a great job as far as displaying their fighting ability. It’s pretty entertaining to see them. As for the stuff outside of fighting... it’s pretty interesting to watch.

How do you feel about Jessica Penne’s success on TUF so far?
I think she’s doing really well. She’s always been a really focused fighter and she’s a really tough fighter, whether it’s at 105 or 115, and so... can’t take that away from her.

Penne has been pretty dismissive of your performance when she’s publicly discussed your win over her.  Are you interested in a rematch in the future to prove that you’re not an underdog or a fluke?
I know I’m neither one of those things and I’m a different fighter now than when I fought her. So if we ever did meet again down the road, I’d be able to finish her even quicker.

Is it true that the Teenage Mutant Ninja Turtles were one of the reasons that you originally got into karate?
It has a little bit to do with it, yeah! I just wanted to do everything that my brother did, and we grew up watching Teenage Mutant Ninja Turtles and Power Rangers and thinking it was so cool how these guys were super heroes and stood up for what they believed in. It’s a silly cartoon, a silly movie, but it kind of forms the way you think and the way you feel, and as soon as I got into martial arts it kind of came into fruition that it could be a part of my life and I didn’t stop. I took it and ran with it.

I really feel like, for the children of the eighties, Ninja Turtles were one of our main gateway drugs into martial arts.
Oh yeah. Ninja Turtles and even Karate Kid. Those movies have good lessons to be learned. Life lessons.

You’ve mentioned in other interviews that your daughter now loves to play Ninja Turtles.
Oh she’s all about it. I was a little hesitant to take her to go see the new one, because the new guys like look Ninja Turtles on steroids. So I was like “I don’t know! It might be too scary.” But we took a chance, we took her to go see it, and she loved it. She’s watched it twice already and she’s all about it. She likes Leonardo because he’s the leader.

Is there anything else you’d like to add before I let you go?
Everybody tune in this weekend! It’s going to be a great card. Not only me, but there’s tons of females on the card that are eager to show their skills and the more love and support we get, the bigger it’s going to grow. So tune in. I’d like to thank my sponsors, Americana, Dragon Dog, Onnit, Caveman Coffee, Eat Fit Albuquerque, and.... Watch me on Friday!

Irene Aldana Is Out of Invicta FC 10