The Karate King in the Boxing Ring 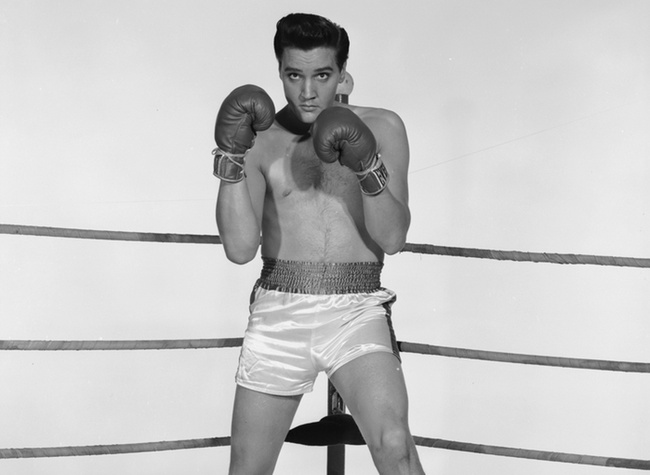 The young Elvis developed an interest in the sweet science when a friend of his showed him a few moves. The future King enjoyed what he was learning, and decided to join his school’s boxing team.

Walt Doxey, Humes High School’s boxing coach at the time, put Elvis in the ring against a student named Sambo Barrom to try him out. Sambo made quick work of the new kid’s face, particularly his nose, and the bloody beating made Elvis reconsider his commitment to the sport. After the match, he told the coach that he was quitting the team because he was a lover, not a fighter.

About a decade after his fated fight against Sambo, Elvis returned to the ring for Kid Galahad. Based on a 1937 drama starring Humphrey Bogart and Bettie Davis which featured more death and fewer songs, the film was about a young mechanic with a killer left hook who became a reluctant hero in the ring. Refuting Presley’s adolescent belief in a firm divide between the amorous arts and boxing, the trailer for the film billed the singer as both a lover and a fighter. 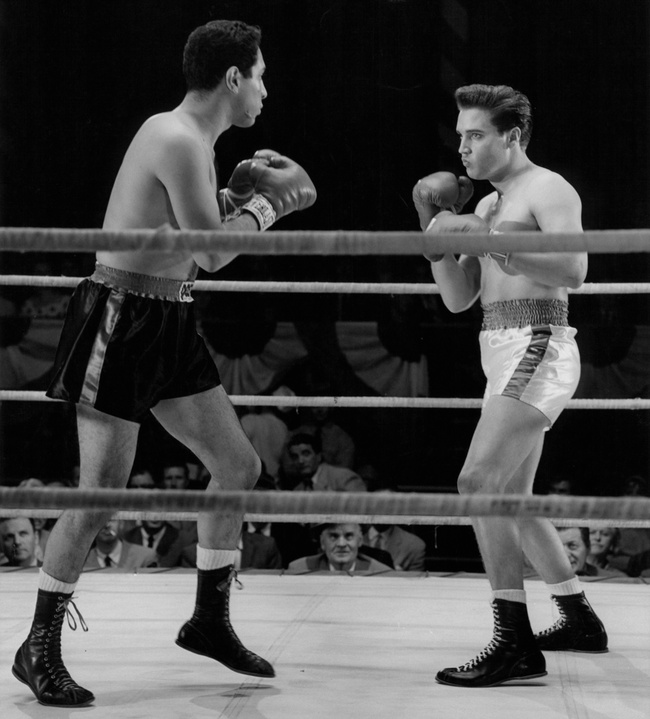 Elvis trained with the former light welterweight champion and Hollywood boxing consultant Mushy Callahan to prepare for the role. Callahan was impressed by the singer’s toughness and his karate background, which helped him absorb a lot more punishment than the average actor.

Not everyone on set was as enthusiastic about Elvis’s combat skills, though. Tough guy co-star Charles Bronson, for example, absolutely hated the King’s karate (Elvis, in turn, dismissed, Bronson as “a musclebound ape”). But Callahan remained a staunch defender of Elvis and his martial arts background.

As the boxer told The Beaver Times in a story from December 5, 1962: “Actors don’t like to get hit. But Elvis didn’t mind a bit. I watched him getting ready for the fight scenes and saw him hitting himself in the face to toughen up.”

Of all of the actors that Callahan worked with, he considered Elvis tied with Errol Flynn as the least afraid to to take a punch. “If a guy doesn’t know how to fight you can tell it in the close-ups. They flinch when a punch comes at them. But not Elvis. He never blinked his eyes when I hit him. He’s the gamest of all.” 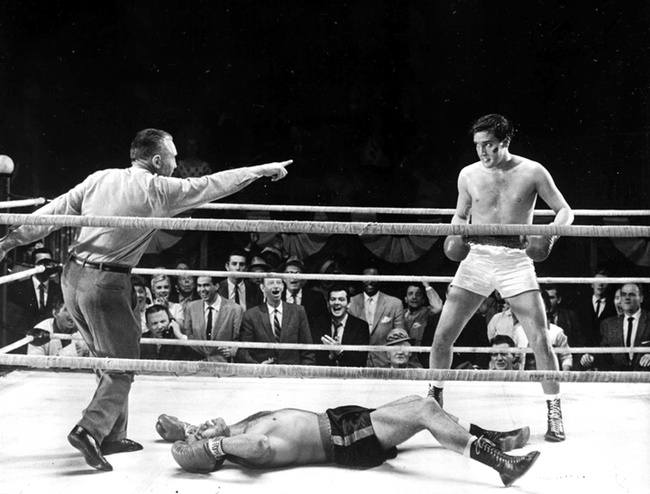 Elvis’s ability to absorb punishment is particularly evident in his first fight scene in Kid Galahad. When his character, Walter, is offered five dollars to be a sparring partner for a local boxing prospect, the struggling mechanic steps into the ring and gets punched in the face. A lot. It’s probably a fairly accurate reenactment of Elvis’s high school boxing match, right up until Walter accidentally knocks out his opponent with a surprisingly deadly left hook.

The performance is strong enough to convince Willy, a local boxing promoter, to give Walter a shot as a prize fighter. Walter begins training with Willy’s trainer, Lew, and spends the second act of the film alternating between winning fights, romancing Willy’s kid sister, and breaking into song at random intervals, as people in musicals are wont to do. Mercifully, none of these songs occur in the ring.

In the film’s final match, Walter faces off against his biggest opponent yet, a fighter named Ramon “Sugar Boy” Romero (played by real life boxer Orlando de la Fuentes). Local gangsters try to convince Walter to throw the fight, but he refuses. He steps into the ring and, after a few hard-fought rounds (that sort of resemble a human take on Rock Em Sock Em Robots), scores the knockout against Romero.

Mushy Callahan appears as the ref in the big fight scene.

Everyone lives happily ever after. Except, presumably, the thwarted gangsters.

Despite Callahan’s praise, Elvis had no real interest in pursuing boxing after Kid Galahad. He had a few high profile friendships with boxers like Muhammad Ali and Aboriginal Australian hero Lionel Rose over the years, but was far more interested in clowning around with his pugilistic pals than talking shop. Elvis and his buddies occasionally “sparred” for the cameras, and there are some great shots of The King pretending to fight boxers out there, but other than that, Elvis stuck to doing karate and delivering coke-fueled rants about karate on stage.

Which was a bit of a shame as far as Callahan was concerned. According to this beautifully backhanded compliment from The Beaver Times, Mushy thought he coulda been a contender:

“He’s a good natural athlete. He could take a lot of guys around now because no good fighters are available. Besides being unafraid Elvis is in terrific shape. I wouldn’t want to mess around with him. He could murder you with that karate of his.”