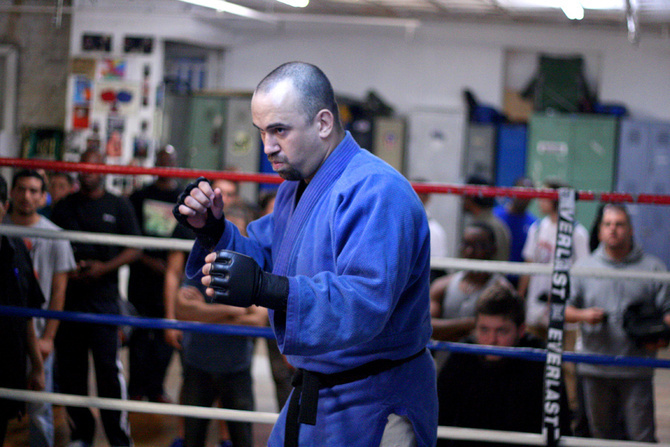 This past November, on an otherwise quiet Sunday afternoon in the Bronx, while most MMA fans were still digesting the UFC 154 event from the night before, a nightclub bouncer in a blue judo gi top stepped into a boxing ring at an unsanctioned fight show to fight a much younger, much spryer personal trainer wearing nothing but a pair of shorts. Their fight was judo versus Thai boxing, old-school vale tudo (Portuguese for “anything goes”), a grudge match. And when the judoka fell via TKO due to a barrage of headbutts early in the second round, with the small crowd perch right on the edge of the ring, it was MMA at its purest. You can thank Peter Storm – the man in the gi -- for that.

New York State banned professional mixed martial arts events in 1997, but rather than waiting for the law to change, Storm decided to start his own fighting organization, the Underground Combat League. It’s pretty much what you’d imagine a lawless no-holds-barred competition to be, with street fighters mixing it up with kung fu masters, jiu-jitsu studs, wannabes, and the occasional psycho, in boxing gyms in Brooklyn to martial arts dojos in Manhattan and Queens, even a mosque in the Bronx. It’s Fight Club with members who actually know how to scrap, some of them disappearing forever after their foray into the underground, some of them moving on to sanctioned regional events. One UCL veteran, an assistant wrestling coach at Rutgers University named Frankie Edgar, went on to become a UFC champion.

If not for his judo black belt and knack for creating something out of nothing, Peter Storm could be any other Bronx native you’d try to avoid on the street. Sure, if you ran his fingerprints, the resulting printout would likely make your hair stand on end. But he’s friendly and likeable, and if you text him first – and if he trusts you – he’s even accessible. Go to his Facebook page and you’ll even see recent pictures of him in the gymnasium of the New York City Police Academy, teaching cops how to grapple. He’s a no-nonsense, no bullshit-type of guy, and probably half of what you think he’d be is true.

Ask him about regrets and he’ll say he has none; ask him about the pitfalls of being a promoter of illicit fights and he’ll talk only of fighters flaking out. Ask him about the rewards and there’s no mention of money, just the satisfaction of seeing fighters accomplish something. Years ago he told me he formed the Underground Combat League simply to create a local outlet for himself and others to test themselves. That was before the sport grew big throughout the rest of the world, though, and would-be fighters began seeking him out for a chance to compete.

To date, there have been over 40 UCL events – and given the political climate, an athletic commission perpetually on the hunt, and the clandestine nature of the enterprise, that’s an accomplishment.  But Storm has pulled it off, and if the big event he has planned for February (at an undisclosed location, of course) comes together, it will mark the anniversary of an organization that has lasted longer than both Strikeforce and Japan's PRIDE Fighting Championships. Only the UFC and a tiny handful of other regional shows throughout the country have lasted longer.

In the media scrum after UFC 155 last weekend, UFC President Dana White announced that the UFC is planning a big show in Madison Square Garden in late 2013. Considering that getting pro MMA sanctioned in New York has been an impossible task for going on four years now, Storm is skeptical; he's heard it before. But he knows that with each passing year the sport gets closer and closer to getting sanctioned in New York. When the ban is lifted, he aims to take the UCL legit. After all, when you no longer have to keep event locations and times a secret, there’s real money to be made. Until then he can afford to be honest about the UCL’s role in the world of mixed martial arts.

“I don’t think its role in MMA as a whole has been too much, but it’s the beating heart of New York,” he says. “New York hasn’t had MMA since, what, ’97? So we’ve been the only show going and the only show giving opportunities to anybody.”

God and Wrestling Come to MSG

Wait, There Was a Legal MMA Fight in New York?