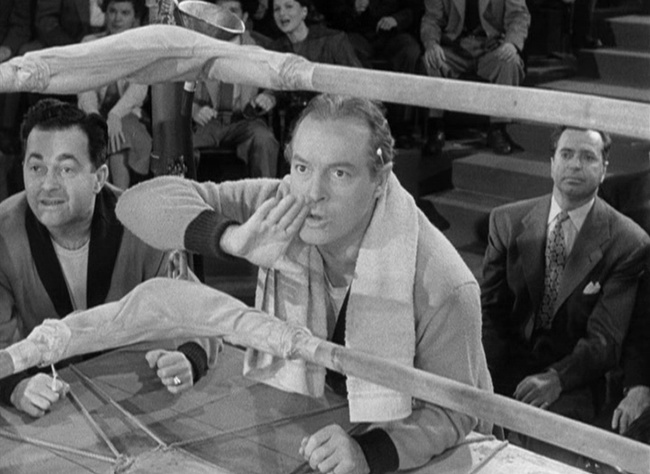 To hear Bob Hope tell it, he was never much of a boxer.

“Some fighters are carried back to their dressing rooms. I’m the only one who had to be carried both ways,” he loved to joke during his old Vaudeville and standup routines. He’d then go on to boast that “I was called ‘Rembrandt’ Hope in my boxing days, because I spent so much time on the canvas.”

He was exaggerating for comic effect. At least a little bit.

As a young boy, Hope (born Leslie Townes Hope) showed at least some aptitude for the sweet science, training with his friend Whitey Jennings at Charlie Marotta’s famed boxing club in his hometown of Cleveland, Ohio. At least enough that he briefly flirted with giving up his other jobs as a newsboy, dance instructor, soda jerk, shoe salesman, and pool hustler, and try to make a career out of it. With that goal idly floating around in his head, the 16-year-old Hope entered the Ohio State Boxing Amateurs tournament at Cleveland’s Moose Hall under the name “Packy East,” a nod to the popular light and welterweight boxer Patrick “Packey” McFarland and his high school, East High, in July, 1919.

“I was sixteen, I weighed 128 pounds and the featherweight class had a top limit of 126. I just missed getting into it. If I’d taken the apples out of my pockets, I could have qualified as a featherweight. If I had, I’d have made out better,” the comedian told the New York Herald Tribune about the tournament in a story published on July 10, 1938. “As it was, I creamed my first opponent. He was constantly looking over his shoulder toward his corner for instructions. When I hit him, he turned toward [his corner] and asked ‘What’ll I do?’ and [his trainer] yelled back strategy. I finally tagged him while his head was turned.”

Hope moved up in the tourney brackets and easily won his next fight by default when his opponent, Joe E. Morgan, failed to show. Young Packy East managed to make it to the finals, but that was when both his luck and skill ran out. His opponent, Happy Walsh, showed up. And he didn’t make any rookie mistakes like looking back at his corner.

“Never forgot my last fight,” Hope told The Plain Dealer on August 17, 1984. “A guy by the name of Happy Walsh. They called him Happy because every time you hit him he smiled. We fought at Moose Hall. I gave him my sunday punch. He smiled. Then everything turned black.” 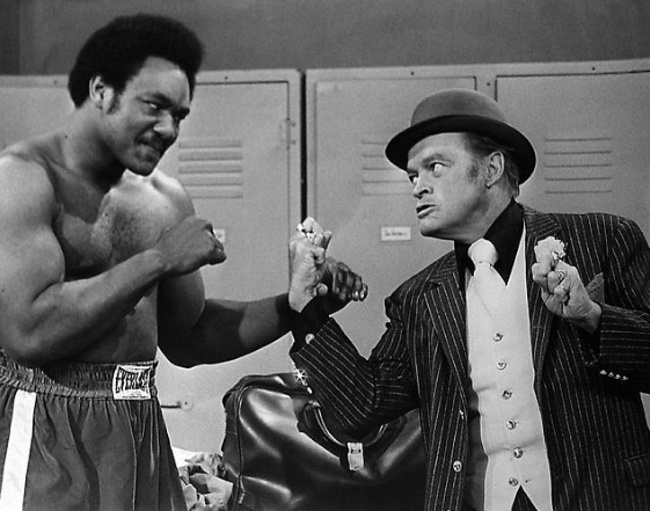 Packy East retired from serious boxing competition after that. And even though he walked away with a fairly respectable 4-1 record (with 3 wins by KO), Hope saw far more comic potential in that one canvas-painting loss than he did in any of his victories. Hope, who passed away in 2003 at the age of 100, was still joking about that loss well into his 80s, trotting out the old Rembrant line for an interview with The Deseret News in 1988, and adding “I’d have won my last fight if the referee hadn’t stepped on my hands.”

Hope did end up making a career out of boxing, in a sense, though, as the sweet science ended up becoming somewhat of a staple in his comedy. It started out simply enough, with throwaway jokes about his lack of pugilistic prowess. In 1948, though Hope took his boxing humor to the next level.

Performing as part of a charity show for the US air force at Madison Square Garden, the comedian challenged boxing legend Jack Dempsey to a bout. Hope/East won via knockout mere seconds into the fight. It was obviously a very serious and real affair. General Eisenhower was a big fan.

20 years later, Hope laced up the oversized gloves again to face Rocky Marciano at a Salute to the USO, also held at MSG. That night, over 19 000 fans watched Hope and Marciano fight to a no contest and then break into a dance party filled with random celebs and boxing heroes.

Packy East made one final appearance when he faced Sugar Ray Robinson for a charity match for the Sugar Ray Youth Foundation on April 21, 1972. East’s manager predicted a quick finish in the press leading up to the big event, but no official outcome is listed anywhere on Packy’s illustrious and ridiculous boxing record.

Hope wasn’t quite done with boxing yet, though. He parodied Rocky for a skit from 1977’s Bob Hope’s All Star Comedy Spectacular, which also stars Ann Margret (as the Adrian-like figure) and Sammy Davis Jr (as the Apollo Creed-ish foil). None other than Muhammad Ali shows up for a cameo at the end.