The Loss That Made Brian Melancon 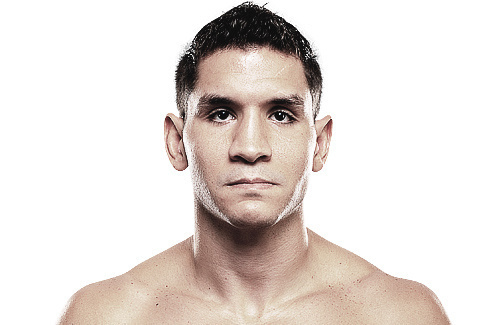 Brian Melancon makes his UFC debut this Saturday against Seth Baczynski. And though the Texas-born welterweight insists he isn't nervous about stepping into the Octagon, the last time he made his debut for a major promotion, in June 2011, he lost.

For that fight, against Isaac Vallie-Flagg in Strikeforce, Melancon had all of eight days to prepare—and that after a month-long layoff that featured an all-inclusive Cancun vacation and lots of barbecue. That more than anything, he says, led to the split-decision loss that’s been in the back of his mind ever since. he says he'll never take such a long break from training again.

Brian Melancon: I was 200 pounds. I cut 25 pounds for the fight. I had no cardio, so I just figured I'd have to knock him out.

In the first round I was hitting him with some really hard shots. Isaac tells me now that I hit him harder than he's ever been hit before. He's a really tough guy; he's really durable. There was a moment or two in the fight where I hit him with punches and was really surprised it didn't knock him out. I felt like I was going to be able to get the finish in that first round.

The second round, I just got tired. I couldn't breathe. I felt like I had to catch my second wind. He outworked me, busy, moving in the clinch, constantly throwing, throwing, just constantly working. He was scoring technique in the judges' eyes. I landed some good, hard counters in that round. He's very durable, got great cardio, keeps going forward, and was just the busier fighter in the second round. There was an uppercut that I was really surprised didn't knock him out. He threw an overhand right at the same time, and I think that's when he broke his hand.

The third round, still a lot of the same stuff. He was being busy in the clinch and working and stuff, but I took him down.  Not too busy; the ref ended up breaking us up a couple of times. Took him down in the last minute or so, 30 seconds. He ended up scrambling for the fence to go up and I went for a big suplex. It didn't turn out to be a high-amplitude suplex but it ended up getting the takedown as the last bell rang. I thought that was going to be enough for the fight. When I got up, I felt like I won my Strikeforce debut. I was happy.

When the announcer was reading the scorecards and I heard Isaac’s name twice, I thought, "That must just be for the second round." When they said Isaac won, I was pretty gutted. I don't even know what I did, probably dropped on the floor or something dumb like that.

It was hard to take that, even given the circumstances, but I followed that up with a win over Felipe Portela, and now I'm here in the UFC, so it all worked out.