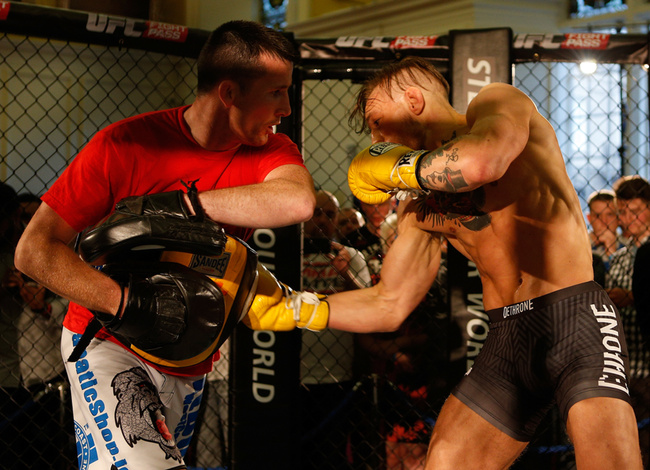 The volume reverberated through the historical Royal Hospital hall in Kilmainham for the open workouts as the star of the show made his way to a small Octagon to put on a striking display for his beloved Dublin audience.

Unlike when the other fighters had been in there, you could have heard a pin drop as Conor McGregor snapped the leather into the hand of his dance partner for the exercise, Owen Roddy.

Several spinning hook kicks and frenzied combinations were unleashed before the dance ended and McGregor raised his hands over his head prompting the audience to reach fever pitch.

Roddy slipped out of the cage relatively unseen except for ATT stalwart Mike Brown who stopped him to shake hands.

“Fuck, he hits hard man,” Roddy told me after he moved away from Brown. “We had no gloves so we got a lend of some of Brad Pickett. There’s nothing in them,” he smiled squeezing the gloves as he handed them over for inspection.

“Rowdy” Owen Roddy was the man who many felt would be the first Irish man to register a win inside the Octagon.  His fights were like festivals. Droves of his fans from the working class suburbs of Ballymun would arrive to see their man and he never failed to put on a show.

For a long time he had taken on all comers, but it was his July 2012 meeting with UFC veteran Shannon Gugerty that was perceived to be his calling card to the world’s flagship MMA promotion, pending a win of course. 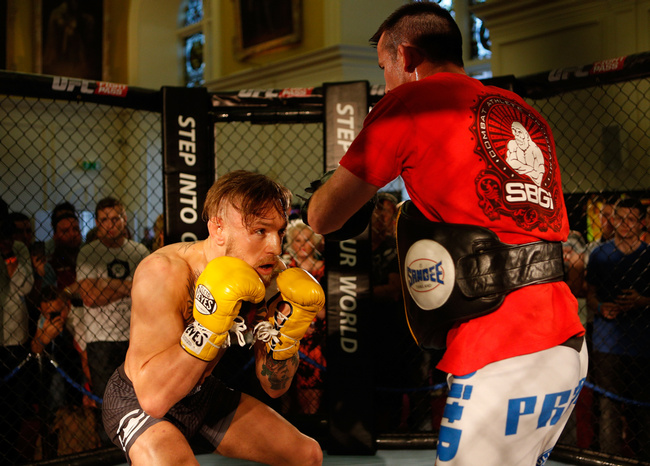 “Roddy has got to know that as much he wants to elevate himself to the mainstream, I'm looking to get back into the UFC and I've never been more mentally and physically prepared in my career,” said Gugerty ahead of their meeting at Cage Contender XIV in which Roddy’s 145 lbs title would be up for grabs.

Gugerty, a Brazilian jiu jitsu black belt, was confident that the fight would easily be won if he could force the action to the ground. Weary of Roddy’s boxing skills, he knew that the Dubliner’s six-fight win streak was not to be sniffed at either.

A minute into the bout Roddy found himself in the worst possible position he could be in. Gugerty took the Irish featherweight’s back and without hesitating sunk in a rear naked choke on the defending champion.

The crowd that had been so manic seconds before fell silent as their hero’s dreams seemed to unravel before their eyes. Submerged in the depths of suffocation for what felt like a lifetime, Roddy eventually emerged from the chokehold.

Having lost the first round, ‘Rowdy’ conducted an orchestra of excited shrieks with his pugilistic skills for the remaining two rounds. It was enough to get him the nod from the judges on the night. A near riot ensued in the National Basketball Arena as the cage was stormed by fans, but Roddy would never get a fair crack under the lights of the Octagon.

Competing one last time, when the Irishman dropped to bantamweight to face Wilson Reis at Cage Warriors 50, despite the war that took place it would the Brazilian’s hand that would be raised after catching ‘Rowdy” with the same submission that he toughed out against Gugerty. Subsequently Reis obtained a UFC contract on the back of the performance. 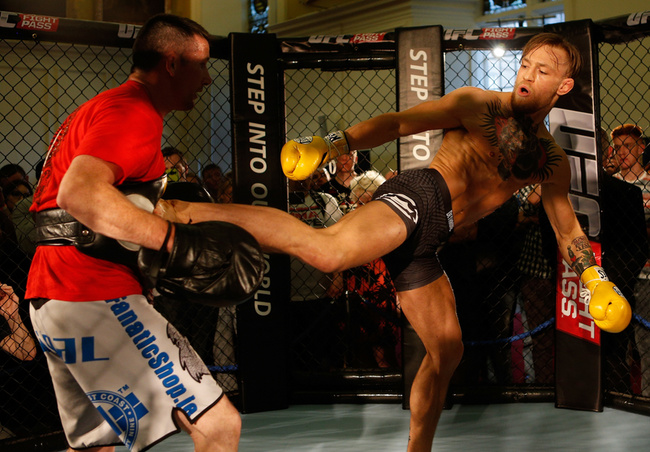 For McGregor, there is no doubt that his teammate would have eventually been offered a contract by Dana White and Co had he not retired.

“Owen Roddy is always in my corner,” said the surging UFC featherweight, “there was an issue in Boston, but it will be great to have Owen back on Saturday. He’s been a major part of my success, anytime I need him Roddy is always there. I’ve learned so much from him.

“He would 100% be in the UFC today if he was still competing. It breaks my heart that he’s not here today. He is a success without getting here though.

“He has his own business with Primal, his club, he coaches, he’s recently got himself a house with his partner and he has kids. He’s got a good life, but I have no doubt he would be here.”

McGregor’s sentiments were echoed by, ‘The Godfather of Irish MMA’, John Kavanagh:

“I’m sure you’ve heard Conor singing his praises, Owen is a real tactician. Any time Gunni is over he’s really excited to work with Owen on the pads. He has a mastery of them kind of things.

“I was always pressing him, for 100% selfish reasons, to focus more on the coaching. He runs my kids program, he’s an amazing kid’s coach and he teaches a lot of the stand up striking classes to all levels in SBG.

“If you want to be a professional in the fight game you’ve got to be selfish with your time, but Owen is always looking to help out everybody.

“He was a fantastic fighter, but I’m glad that he is in a coaching role now.” 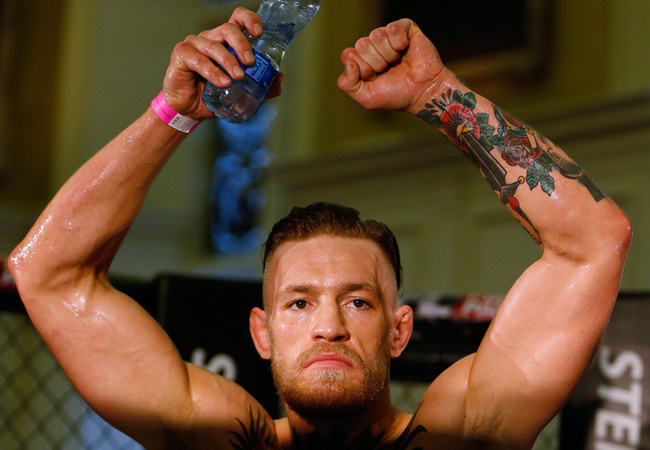 “You can ask Conor, Owen and him spar all the time – he belongs in there with anybody. There’s no one that ever fought Owen that had an easy fight. He had a couple of losses, even his last fight against Wilson Reis, that fight was going Owen’s way right up until the end.

“He had a lot of fights where he was winning on the score cards and then he would suddenly get cracked and things would change. Without Owen coming up through the ranks the likes of Conor might have missed out on a valuable learning curve.”

Leaving the venue, Roddy was packing his gear into his car. A man who has time for everyone he meets, he shouted across the car park.

He jokingly asked: “What do you think, will I just rob some gloves and jump into the Cage on Saturday?”

How we all wish he would.

Ireland Puts Its Faith On McGregor