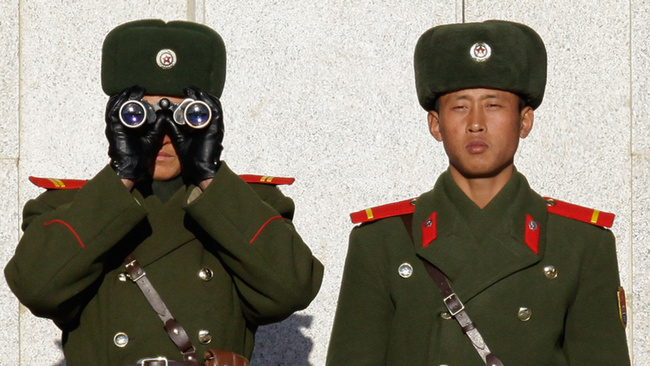 North Korea is always just a few giant leaps behind the times. In this clip, “North Koreas powerful elite troop's martial art training [guided by Kim Jong Un]” we are treated to that special North Korean mix of reverent-bordering-on-hysterical narration, alternate reality Communist hype track, and stuntin’ on your many imaginary foes.

What this video is supposed to accomplish is simple: send a message to North Koreans that their military is ready for any threat. This video was not meant for international consumption per se, but if it did manage to get out, then that’s just fine, because only one thing is better than a patriotic populace, and that’s a terror stricken foe. These types of performances were also a typical part of the Chinese People’s Liberation Army’s PR as well, until very recently, when Chinese generals sheepishly admitted that breaking bricks with your face has no real battlefield application.

These types of demonstrations have their origins in village-level wushu performances, once common throughout the Chinese countryside, but now slowly being replaced by flashier events. There was always the “One man vs. Many” performance, followed by breaking all manner of concrete objects with your hand, with your head, with your belly, on your belly, and on your face. Then a few rounds of getting hit with sticks, hitting other guys with sticks, falling on glass, and flipping through the air.

I’ve seen these performances before in the backwoods of China. The average wushu show is usually accompanied by a short operetta, some stand-up comedy, a speech or three from government officials, a shameless plug for all of the sponsors, and a nod to the new generation via heavily made up girls in leotards bouncing to bad techno. Wushu performances tend to employ actual martial artists, called upon by the officials (in this case Kim Jong Un himself) to perform their art for the People.

Which brings us to the martial element within the clip. These guys are performing a public relations stunt, but much of the work stems from actual, effective martial arts. The Tae Kwon Do kicking demonstrations at the beginning of the clip are nothing to laugh about. In Alex Gilles' book, A Killing Art, tae kwon do is revealed as a weapon of choice for the Korean CIA when they were hunting down and exterminating North Korean communists. And vice versa. There is real intent in those throat strikes and kicks, not just a performance for the masses.

All that broken concrete mentioned above is a real technique, body hardening, which is a staple of the Asian martial arts, both philosophically and practically. Body hardening involves beating a particular part of the body until the nerves are so deadened that you feel no pain. In the traditional Asian martial arts, building up a tolerance to pain through beating wooden dummies, punching slabs of concrete, kicking wooden poles, and driving one’s fingers into buckets of sand is the ultimate in macho posturing.

It is also effective, to a certain degree. One of the first parts of the body to undergo beatings is the forearm between the elbow and the wrist, the so called “iron bridge” technique. Check out the line of guys beating what seems to be a long slab of wood wrapped in rope for an example of working the iron bridge at (and while your at it keep your eye out for the rag doll slam at 1:05, demonstrating how “the human body does a better job of creating force with leverage than just pure momentum”). A tough forearm can deflect attacks with a stick, bat, or iron bar and can also inflict damage by meeting an opponent’s incoming strike on the inside of the arm, the soft underbelly of the iron bridge.

The other body part to commonly get beaten is the shin, for much the same reason. When I saw Weidman deflect Anderson Silva’s kick and break his leg, the first thing that went through my mind was, “Did Weidman kick a wooden dummy with his shin for several weeks, or does he just have inordinately thick bones?” Why not both?

Body hardening, although no longer a part of the Chinese PLA road show, is still part and parcel of every kung fu master’s training regimen. Wooden dummies are not just made of the first slab of wood you can pick up and stick into a hole in the ground. There are specifications. There is a history to the wooden dummy. The same goes for the “iron circle,” which is used primarily to harden the forearm, and other more esoteric tools, such as the dog-hair punching bag, which is supposed to help inure one to poison and strengthen fingers. Who knew?

It’s fitting that the DPRK Special Forces spend a lot of this video demonstrating how hard their bodies are. The message these staged performances send to the North Korean people is simple and powerful: Not only are North Korean soldiers well versed in the martial arts, but they are able to take a beating and keep on coming. They can absorb all that the mighty imperialist enemy can throw at them, and still advance on to victory, utilizing traditional martial arts techniques and the indomitable juchen (self-reliant) spirit… a message which speaks to the core of North Korean political and social ideology.