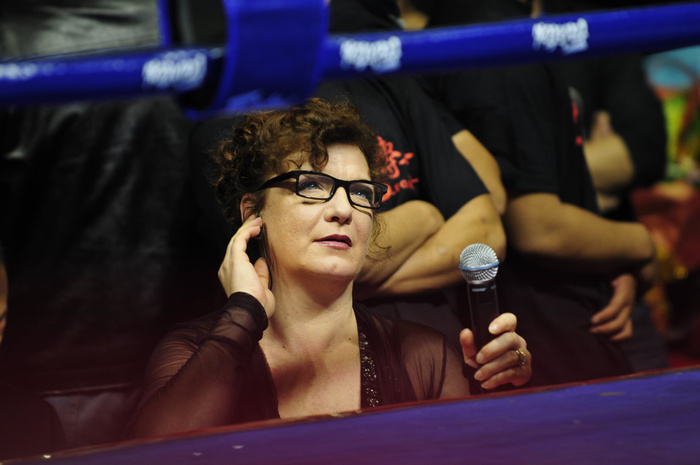 With fiery hair and a flair for the dramatic, Hardt—you might know her as the "Crazy Screaming PRIDE Lady"—and her high-volume announcing embody PRIDE's pageantry. She made her entrée into mixed martial arts at the 2000 PRIDE Grand Prix, and her first glimpse of the sport came from behind a microphone while watching Kazushi Sakuraba, Igor Vovchanchyn, and Mark Coleman scrap with blue gloves. She was a fixture of PRIDE until it folded in 2007, her voice cutting through applause from tens of thousands inside the Saitama Super Arena. Since then, she's parlayed her persona into gigs with DREAM, OneFC, Bellator, and other MMA promotions.

But that "Crazy Screaming PRIDE Lady" moniker doesn't reflect the nuance in each name she calls—soundscapes constructed from drawn-out vowels, staccato counterpoints, solemn shifts in intonation, and visits to the extremes of the human vocal range in the space of a few syllables. It reflects an expertise that Lenne Hardt cultivated through a North American upbringing in theatre and opera, and a career as a Tokyo-based radio DJ and voice actress. Fightland spoke with Hardt about her approach to announcing, her favorite names to call, what her voice feels like the day after, and the longtime UFC champion who got his nom de guerre from her.

Lenne Hardt: I'm the youngest of six kids. So you can imagine that in order to get attention, I had to show off or be funny or do something strange.

I didn’t go to regular school—and this was before it was cool to be homeschooled—so most of my training was ad hoc. I studied [opera] with a professor at the University of Montana—Professor Hicks—when I was 14 until I was about 16. But most of my training was in musical theatre, which I started doing at I don't even know how young…I'm sure people would know a lot of the musicals I was in, but they wouldn’t necessarily know the production companies. We're talking Off-Off-Broadway and summer stock: Cabaret, A Funny Thing Happened on the Way to the Forum, Man of La Mancha. I've been in over 200 productions, because in summer stock you do four shows at a time. I did a lot of comedy theatre as well, and that list adds to the 200.

Back then we didn't have pin mics, so you needed to have a lot of breath control and you needed to be able to, as we say, speak to the back of the house. That's where a lot of the volume and strength [in my voice] comes from.

I had come to Japan for a year to study Japanese—my sister-in-law is Japanese and she married my brother when I was eight years old, so I already had a bit of Japanese under my belt. I came [to Japan], studied for one year, went back to the states, and as every actress does I went to New York to try and make it. I worked in hotels and restaurants for a while and I was a really good bartender, but I was pretty quickly able to get into voiceover work and radio. I came over to Japan this last time—27 years ago—to be a disc jockey [at an FM radio station]. Disc jockey work led to a lot of voiceover work: I used to like doing things like English versions of Japanese fairy tales, a lot of Japanese anime, character voices on computer games. I was registered with a couple of different voice-acting agencies here, and that's what eventually led to my job with PRIDE.

My agent called me [about a job announcing at the 2000 PRIDE Grand Prix] and she said, "It's some kind of boxing event."

I'd already created an image in my head when my agent mentioned boxing and I wanted to make a bigger deal about it: more pomp, more circumstance, more celebrating the athlete and building anticipation of what he was going to do. I used to love watching old black-and-white movies—I still do—and I'd remember the boxing announcers who'd pull the microphone down from the ceiling and say "in the red corner" or whatever, and I thought, that's not good enough. This fighter is going to come into the ring and get the crap beat out of him, he trains really hard and sacrifices so much, and you're saying his name like it's an incidental thing.

When I rolled my r's for the first time, it made sense to do it that way and the audience responded to it. Honestly, there was nothing in my head. It was very organic. My muse visited me and I was being in the moment. Excuse me while I go eat a granola bar and put on Birkenstocks now. 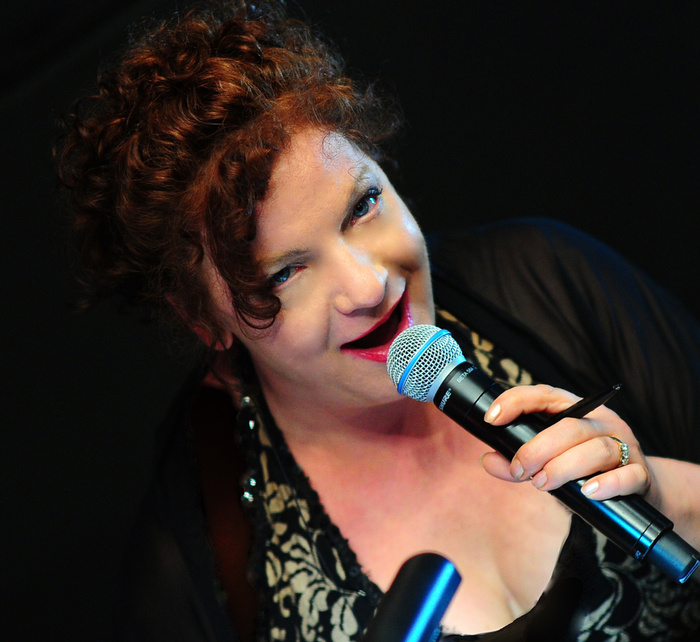 Obviously any names with r's in them are fun because I've come to be known as the woman who rolls her r's—I try not to overdo that, but it's expected of me now and I'm not going to not do it just because it's been done. Anyone with three names is fun to call. Antonio Rodrigo Nogueira and Antonio Rogerio Nogueira had great names, were very good fighters, and I certainly tried to use subtle differences in [announcing] their names so they weren't done the same way.

After a while, you get to know the personalities of the athletes. Heath Herring had his country-western stuff and it was always a yee-haw kind of thing. With something like Fedor's entrance, you couldn’t do a high-pitched "Here you are ladies and gentlemen!" His song has these really low tones, almost like Catholic religious music. So I'd drop it down and say in a really deep tone: "from Russia with love." It worked out better for me too because if you're always speaking in the same note or the same key or the same register, you're going to blow your vocal cords.

Josh Barnett was one of the hardest for me. Barr-rr-rr-rr-nett [trilling r's] I suppose you could say, but you want to do something different and interesting and new, and you want to give them a good call, something they love and that their fans are going to want to say almost like a chant. Once I got to know him, I found he was such an over-the-top, big personality, and at Pride 32 in Las Vegas, it just became natural to do a really long draw on both names—it just seemed right for that guy. He's bigger than life.

By the way, I gave Anderson Silva his nickname, the Spider. I remember going up to him after [the first time I saw him fight], he came out in his Michael Jackson mode with a Michael Jackson hat on. I matched his style to a pop music style, like a funky, cool, rhythmic thing. I asked him that night and said, "I nicknamed you this, is that okay?" He was very excited and really sweet.

A lot of people say, "You've got the easiest job in the world. All you do is call names." But it’s a very difficult job. I'm so tired after a show—the amount of energy you put into it is actually physically challenging. I'll have a sore back and sore stomach muscles afterwards, stiff shoulders, sore throat sometimes—not the throat so much as the neck on the outside because I'm pushing the sound out. And we don’t always have such great sound systems, depending on where you're working. Sometimes you have to [compensate for a bad sound system]. I'm glad to say that people probably don't know how many times my mic has gone out.

The day after a show my voice is fine. It comes back all on its own. As I get older my voice goes a little bit more easily, and that's common—I'm not comparing myself to him, but even Pavarotti eventually couldn’t hold notes as well as he used to. In certain seasons I have allergies—the allergies here in Japan are really quite bad because right after the war, they planted all of these cedar trees and now people who've never had allergies before are getting allergies—and those will roughen up a voice as well. And I thank my lucky stars that I do what I do for a living, because even when my voice is a little rough I know I can still do it.

[When I first saw MMA] there was a little part of me that thought, do I approve of this? This was before PRIDE changed their rules to make it safer, and of course it's not the same as the Unified Rules and a lot of people still think their rules were wrong. Within the first few minutes of the first round of the first match, I ran a whole gamut of ideas through my head and decided, no, this is a cool sport. It didn't take me long to realize, especially with the great sportsmanlike behavior, that it was not a blood sport.

With PRIDE, I was spoiled rotten because it was the first [MMA] thing I did. You have no idea how many times I got shivers, goose flesh, almost drawn to tears because of how fantastic the production value was, the timing, the infinitesimal little things that they would make sure were done perfectly. And having directed and produced shows myself, I know how hard that is and I'm a stickler: get there on time, rehearse, go home and do your homework, then come back and do it right. You don’t find that in a lot of places, and the Japanese are particularly good at this—nothing goes wrong, and if it does, oh boy, heads will roll.

The aspects of live and only once are really important in why I became what I am today—whatever that is! I like the fact that [announcing], as with MMA and other forms of martial arts and competitive sports, is non-repeatable. Every time you perform, you're going to be performing for a different audience who's reacting differently, sending off different kinds of energy. It's live, there for that moment. You're never going to have that exact same experience again.