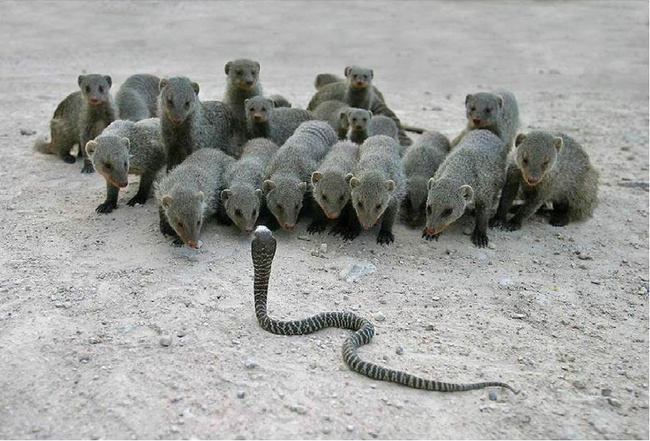 There is a famous line in the Bubishi, the ancient Chinese text that shaped the way karate developed on the island of Okinawa, relating to the generation of power through the use of weight. It remarks that the tiger does not bring down its prey with its claws, they are just the instrument through which it applies its weight.

In terms of hitting, the meaning is simple. Don't arm punch, throw your weight into your shots. But watching the big cats hunt, pouncing their weight onto their fleeing prey, latching on with their claws, and dragging the victim to the ground, one could find inspiration for the grappling game. A lion or tiger will swat at rivals or its cubs with its paws, but their tremendous weight combined with their agility is their greatest weapon. A lion can weigh up to five hundred pounds, a tiger can have another two hundred and eighty pounds on that—nothing they hunt is going to be able to carry that for any distance.

The approach is simplistic, because of the vast contrast in abilities they have with their prey, but you can't argue with results. Here's the thing, even at the highest levels of grappling competition, the same ideas can be seen time and time again—they just rely on a little more nuance to set up. Get the grips (the claws), usually block a leg, drag them down. Leo Vieira's use of his weight wrench an opponent out of the turtle and put in the hooks for back mount certainly seems very familiar.

I have always believed that while the animal kingdom won't teach you much about nuance, it will boil the mechanics and tactics of a fight down to the absolute brutal basics. Life and death stakes, size disparities, uneven ground. The circle of life isn't fair or sporting, but it is a struggle at every stage.

Roy Jones Jr. found inspiration in watching and breeding fighting cocks. Hirokazu Kanazawa won the first JKA All Japan Championship after crafting a strategy around a story his sister had told him about a pair of foxes working in tandem to distract her and steal from her picnic basket. The styles of kung fu named after, inspired by, and imitating animals are too numerous to count. Even in modern Brazilian Jiu Jitsu nomenclature we find an anaconda choke, a gator roll, an octopus guard, the turtle, and the butterfly guard. Though the butterfly is the least threatening of all of those creatures but the most commonly utilized technique, I would posit that perhaps we should replace the tired butterfly guard with the mighty Mothra guard.

I don't want to focus on the big cats today. They are truly awesome predators, but their physical advantages, once the chase is removed, simply make it too easy. I want to discuss a creature which fights at a seeming disadvantage against some of the most dangerous predators in the world.

The great Archie Moore had a couple of nicknames. He was known as Ageless Archie because of his advanced years and tremendous skill, but he was more commonly termed “The Old Mongoose”. Nothing could have been more appropriate, for there is no wilier animal in creation. 'Mongoose' refers to the family Herpestidae, a group of small mammals which—almost across the board—fight venomous snakes just because.

Those of you who remember Rudyard Kipling's stories will recall the tale of Rikki-Tikki-Tavi, a mongoose who kills a pair of cobras and destroys their eggs to save the British family he serves. Such is the hatred that mankind feels for snakes that the scrappy mongoose has become a beloved ally.

While mongooses do have a natural resistance to neurotoxins, the jury is still out on their resistance to hemotoxins—the stakes are lowered, but they certainly don't enjoy getting bitten. The hunting habits that they have developed are fascinating because their attacks on snakes almost always devolve into duels. There isn't a hunt and a chase, as when a lion takes down a zebra, just a fight. If you taped bowie knives to each of the zebra's limbs, the lion might have to wise up a bit.

In this instance, notice the amount of lateral movement used by the mongoose, let's call him Archie. Lateral movement in boxing is useful because it forces the fighter in the center to pivot (“keep turning him!”). When a fighter pivots, his weight is transferred to his lead foot as he swings around it. He might not feel it, but he isn't in position to transfer his weight into his blows until he has finished turning.

But a snake doesn't have two points on the ground. Its turning is a whole lot more cumbersome. Notice that the black mamba in this video will allow Archie to circle around to blind angles and then lunge directly in that direction because he cannot actually follow the mongoose around. Of course it's still a dangerous game for the mongoose, because as soon as he comes close to the snake's tail end, the snake will lunge at him. Archie wants the mamba's head, so that the snake isn't free to bite him repeatedly.

With the exception of dressage horses, most four legged animals don't side step particularly well. As a result the mongoose circles the snake by jogging in the direction that he is moving. Doing the same inside the Octagon got Jon Jones and Alistair Overeem accused of cowardice. But check out the speed of the pivots on this quadruped. As Archie circles, he waits for the lunge, then pivots around his two lead legs as he looks to get his teeth into the snake.

This time he thinks better of it.

Really the mongoose excels in a game of reactions and attrition. He baits and draws the strike out of the snake, repeatedly evading.

Venomous snakes aren't built for prolonged battles and soon enough the snake slows down, or becomes more cautious at any rate. Becoming obviously less keen to strike at the mongoose each time he baits, the mamba eventually lashes out and Archie manages to pivot around to catch his opponent behind the head.

Archie violently shakes the snake around and then throws him away. You'll notice this common factor in any mongoose—it's the equivalent of getting out of range after striking with a shove as we examined Giorgio Petrosyan doing. No sense doing all that work to get in a good shot, then getting bitten as you start trying to eat your victim. The snake is already done for, and Archie steps in to pick up his prize. Chalk up another win for the mammalian team.

Here's another video with far less circular movement, but just as much drawing.

No mongoose is going to step right in and kill a sizeable venemous snake straight off the bat, they're just too dangerous. The mongoose is, instead, the perfect outfighter, only hitting back with force when he knows the snake is slowing.

The animal kingdom is full of creatures with fascinating equipment and methods, but to me it seems that the mongoose, courageous and sly in equal parts, is the one which a professional fighter should most hope to emulate.