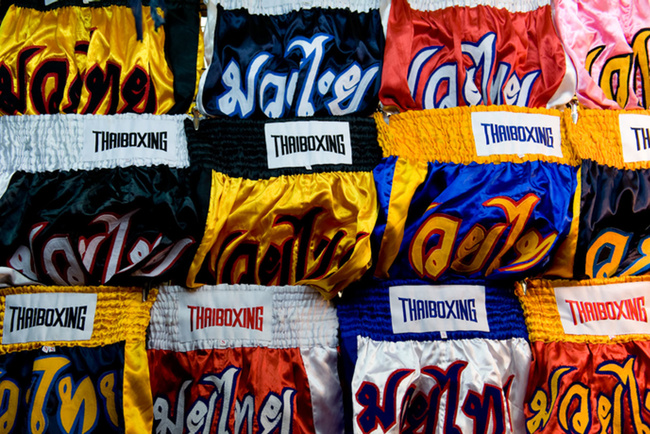 There are eight of us "professional bloggers" meeting tonight for the first time. While they're flying in from as close as Phuket or as far as Mexico, I'm riding the bus to our hotel in central Bangkok from my apartment in the capital's semi-rural outskirts.

About six weeks ago, I received an email from a representative of the Tourism Authority of Thailand (TAT), inviting me to participate in a one-week "Muay Thai blogger tour" of Bangkok. The email promised perks like hotel accommodation, Muay Thai training at various gyms, tickets to fight nights, and lots of free food.

I called the rep and explained my hesitancy to do a sponsored tour of any kind. "You'll have creative control," he assured me. "You don't have to advertise for us, you just have to write honestly about your experiences."

I accepted immediately, though silently wondering why they offered a spot on the tour to me, as I already write exclusively about Muay Thai in Thailand. But then I thought of the free food and free tickets and access to new training camps, and I kept my mouth shut, just in case they might reconsider. 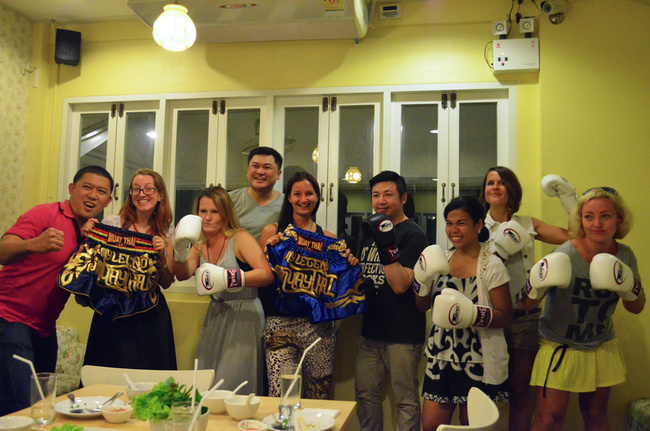 Around 5pm on the first day of our Muay Thai blogger tour, our handlers for the week load us into a couple vans and shuttle off to our group's first dinner in Bangkok, appropriately booked at a Vietnamese restaurant. In between perusing the menu, the bloggers, most of whom are meeting each other for the first time, make small talk around the table in differently accented-English.

"So, do any of you do Muay Thai?" I ask the table. A couple of the women say no with a laugh, as if they couldn't imagine such a thing. Only one lone male blogger at the end of the table raises his hand, says he trained a bit at Tiger Muay Thai, as well as in his home country of Malaysia.

After we order a few drinks and dishes, the first meeting of the Muay Thai blogger tour officially begins. Representatives from a company working with the tourism board hand out packets containing blogger contracts and schedules.

Gennadiy, a marketing consultant from Brooklyn, introduces himself as one of our organizers and launches into tour logistics. "If you take a look at your schedules, you'll notice that each day, you'll be seeing a different camp around Bangkok. I don't know much about these camps because I didn't decide where you'll go. So if things go wrong, please use your 'inner Buddha' and take things calmly. You can come complain to me. I probably won't listen," he says reassuringly, "but you can still complain to me."

"Also," he continues, "I just want to reiterate that you have complete creative control with what you write about this experience, but please talk to us first before posting anything really negative, and we'll see if we can sort the problem out."

Our blogger contract stipulates we must publish two articles within a month after the tour concludes, as well as use our social media accounts to post check-ins or updates at least once a day, including in our posts "#TATmuaythai," the hashtag of the Tourism Authority of Thailand's Muay Thai Facebook page. "You can also include other hashtags too, like 'hashtag Muay Thai' or 'hashtag Thailand.'"

From across the table comes, "I'm going to include the hashtag 'Crazy Russian Girl!'" That's Katya, the bottle-blonde Russian with a pleasantly thick accent. "Is okay, right?"

"Yeah, you can do that too…" Gennadiy concedes. "We also suggest things like 'hashtag Thai boxing,' 'amazing Thailand,' maybe the name of whatever gym you're at… You know, simple stuff." 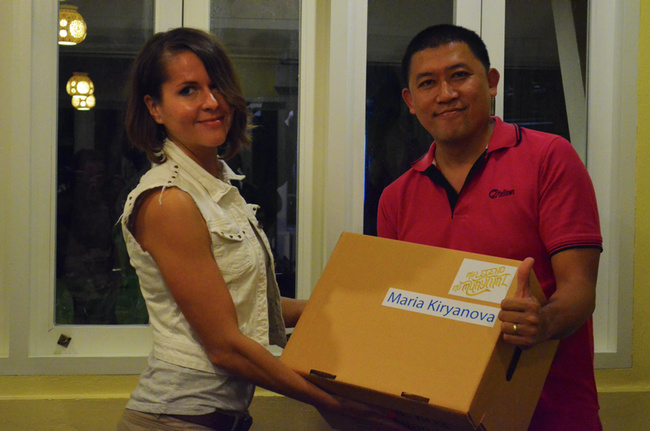 Next, we're instructed to go around the table and introduce ourselves. "I tried to put together a very international group," Gennadiy says to the eight of us, "because it's important to hit a variety of markets." He's succeeded in making it international: There's Evelin, who was born in Poland but grew up in Germany, Gael from the Philippines, Nick from Taiwan ("Not to be confused with Thailand!" he reminds us), and Alex (short for Alexandra) from Slovakia. Sitting across from me are Masha and Katya, both Russian, and Mike from Malaysia, who announces he'll be going out every night this week after Muay Thai training to dance in Latin clubs around Bangkok, in case anyone wants to join.

I busy myself studying the schedule—four full days of this Muay Thai touring business, mostly composed of visiting gym (only one of which, Petchyindee, is familiar to me), padded with fight nights at Lumpinee and Rajadamnern, and rounded out by some sort of stage show entitled "Muay Thai Live: The Legend Lives," touted in the included flyer as "Bangkok's thrilling new stage spectacular." Plus a massage at Health Land on the last day. And free food at every meal. Fantastic.

I tune back in when Gennadiy starts explaining how he decided on the eight of us, out of the thousands of relevant bloggers out there. "You're all here because you reach different audiences we're hoping to target. Some of you are travel bloggers, some are adventure bloggers, or fitness bloggers. And you blog in different languages: English, Russian, German, Chinese… These are all big markets for Thailand.

"We want tourists to view Thailand as a destination for health and fitness, not just sunbathing and beaches. Some people travel to Thailand often, and a lot of them might be looking for off-the-beaten-path experiences. For example, if you want to get in shape, a week in a Muay Thai gym might be a good start. So what we want you to do is make your audience interested in Muay Thai, and maybe they'll come here and train for a week or two at a gym, you know, before they go swimming and sunbathing." 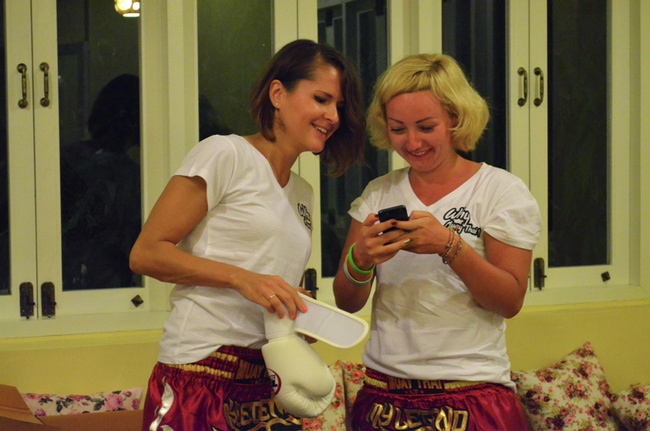 An little later, someone from the TAT office carries in stacks of cardboard filing boxes with our names on them. We're called up one by one to accept this first of many gifts this week from TAT and the host gyms. The company photographers are at the ready; even a videographer is off to the side.

Katya and Masha, the Russians, receive their file boxes of Muay Thai treats before I do, and excitedly hold up new pairs of 8 oz. Twins gloves, handwraps, Muay Thai shorts, and t-shirts with the "My Legend My Muay Thai" logo on it, in reference to TAT's Muay Thai promotional website.

"What does this mean?" I ask Gennadiy, pointing to "Why Muay Thai?" screened in small print on the front of the shirts.

"Well, that's the question you're trying to answer for your readers," he says. "'Why Muay Thai?,' as in, 'Why come to Thailand to train Muay Thai?' I told them to write on the back, 'Fuck you, that's why,' instead of 'My Legend My Muay Thai,' but they didn't seem to like that idea."

Meanwhile, having already donned their gloves and shorts, Katya and Masha are play-sparring behind our table in the back of the restaurant. The photographers love it, and ask them to pose for portraits amid the action shots.

"Muay Thai is so amazing!" Katya exudes to the TAT directors in between jabs at Masha. "I've been living in Phuket for two years but this will be first time I train! It's my dream to be on this blogger tour! I fall in love with Muay Thai and I want to try it, and do it in Phuket when I go back next week!"

It remains to be seen how much of an impact our collective articles will have on our target audiences, but at least TAT has a minimum of one Russian fan.