The Muscle Shark Lives On: Catching Up With UFC Vet Sean Sherk 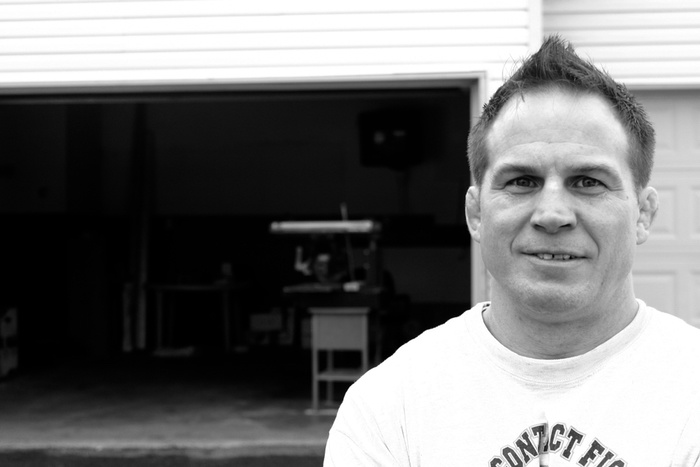 Sean Sherk is the obsessive workaholic you’d expect to win belts. Greg Nelson, his former coach at the MMA Academy, is constantly telling visitors how all he wishes for is “another Sean Sherk to walk through my door.” No one worked as hard, or as diligently as Sean Sherk did. He was known during his career for a superman physique piled onto a short, compact frame and cardio for days. Attributes that now come in handy during 12 hour days hauling material back and forth from Menards for his house flipping business.

He just started work on his 25th house in three years last Friday. Shark and a skeleton crew of two old school buddies are re-modeling the basement, painting the whole place up, and putting in a brand new carpet. Sherk’s there rolling up walls after putting in a few hours at the gym. Years of training and competing have pretty much wrecked his body: he has torn shoulders, torn knees, and both hips probably need to get replaced. But there’s no stopping this guy.

“I work like I train, hustling back and forth, running all around, up early … I’m a freak”

In a decade as a professional mixed martial artist, Sherk went 36-4-1 with his losses coming only against legends: Hughes, BJ Penn, GSP, and Frankie Edgar. He fought like a tank with an Energizer battery, pounding uppercuts and hooks from inside and grinding his opponents into the mat like a classic Midwest wrestler. Yet, despite his stellar record, Sherk is not a famous champion—especially with the casual fan base. And although he dominated pretty much everyone he came across during his career, when Sherk left the UFC there was no pension, no vast fortune to invest in paper nor land, no rest for the former champion.

“If there’s one thing I would tell every fighter out there right now,” Sherk said. “It’s get your exit strategy down. I’ve always needed a plan, I kinda obsess over it. So when it came time for me to quit fighting, I wanted a business in place ready to go.”

Sherk’s first professional fight as a mixed martial artist took place in 1999, in Mahnomen, Minnesota, on a card featuring Dan Severn vs. some guy named Slade Martin. He won that fight and went undefeated for 20 more before facing welterweight champion Matt Hughes at UFC 42.

“Hughes had beaten Dave Menne, who was my mentor,” said Sherk “So it was a surreal moment getting into the Octagon with him. He was the guy I always wanted to be.” 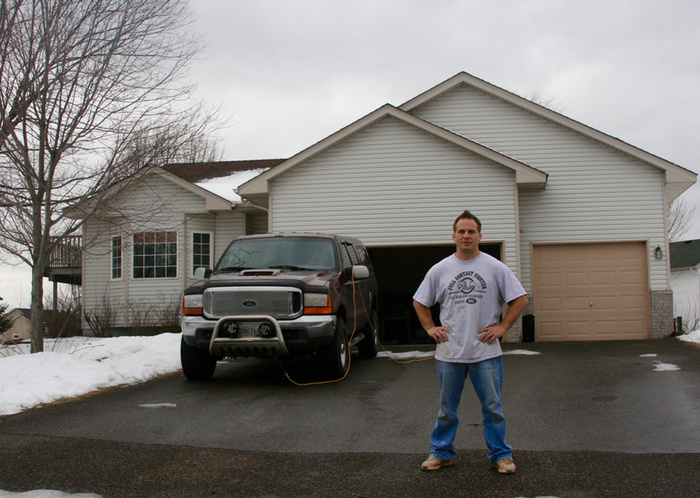 Sean Sherk in front of a house he's planning to flip.

Sherk came up short against Hughes, losing a five-round decision, and then was cut from the roster a few weeks later. To this day Sherk isn’t quite sure what went wrong. Maybe it was his agent at the time, Dewayne Zinkin, who had run-ins with Dana White before. Whatever the case may be, here he was, eight weeks after fighting for the world title against Hughes in American Airlines Arena, fighting in a barn at the Anoka State Fair.

“Took a little bit of mental toughness to not let that get to you, I’ll tell ya that. But it was kinda cool too. I was a big name locally and everyone in the barn, maybe 1,000 people, they all knew who I was and everyone came to see me. When I came out the whole place exploded and they were chanting and dreaming my name. That felt pretty good.”

“That was how I made a living at the time, traveling all around the country and fighting in these smaller promotions. I went 11-0, but after a while it was really tough to get a fight. People were backing out a lot. Nobody who was young and coming up wanted to face me and get an L, and I didn’t want to face bums. So I actually retired because I couldn't make a living doing MMA. I started a hardware flooring business, Cutting Edge Floors, and worked a second job at a factory.”

The factory job grated on his nerves. After a few months Sherk called up his agent at the time, Monte Cox, and asked if there might be a chance to get back into the fight game. Cox called back a few hours later and said, Yes, there’s a fight against GSP in 12 weeks if you want it.

“I quit my job the same day and went to the Academy immediately to start training.”

Shark submitted Joel Blanton in September of 2005 and fought GSP two months later, a loss via TKO. His next fight was a close UD victory over Nick Diaz (sidenote: Stephan Bonnar and Eddie Bravo commentated this fight, and during the third round they discuss retirement and fighter pay). After his win over Diaz, Sherk was able to win the vacant title in a bloody Fight of the Night victory over Kenny Florian.

It had been a long road to the title. This was Sherk’s 36th professional fight, he was 32-years-old with a family and only five fights left before his retirement 2010. When Sherk had the title stripped for failing a drug test, it was definitely time to think up an exit strategy out the fight game.

That exit strategy was a business he developed with a partner, Training Mask selling a product he used during his own training camps.

“We had that thing ready to go for the Dunham fight,” Sherk told me. “YouTube videos of me training with the mask on, working social media, seminars and expos. I was talking about it during interviews. We really pushed it and it was very successful.”

He sold that business a couple years ago and started this house flipping business, something he wants to turn into real estate holdings at some point in the future.

“I made more money outside of the UFC than in it, and that’s just how the game works,” Sherk said. “You gotta hustle or you’ll end up broke and forgotten.”

Sherk on the legends:

GSP:
He was a really good game-planner. I always felt like I was one step behind him. As soon as I felt I had caught up and was ready to make a move, he’d slip ahead. It was really a chess match with him and it felt like he was once step ahead the entire match.

Nick Diaz:
His ground game was unbelievable. He has these gummy long legs and incredible flexibility. He wasn’t a really hard hitter, but his gosh darn BJJ was out of this world. I was like holy shit, I could be in some trouble here. So the whole fight was on the feet.

Kenny Florian:
I remember grabbing him and thinking, man I love 155. I just had a huge strength advantage, even with a torn shoulder. I said to myself, as long as i don't make any stupid mistakes, this is going to be a good night.

BJ Penn:
He’s just a different animal. He was good everywhere. Very flexible and he hit real hard and real accurate. His boxing was phenomenal. His balance was crazy; I’d single leg him and lift his leg way up in the air and he’d just be dangling there punching me in the face. After that fight the first thing I did was hire a boxing coach.

Frankie Edgar:
I’ve never been more pissed off during a fight than against Frankie. He ran the entire fight. When I lost I just thought to myself, ‘man, that wasn’t even a fight.’