The Night Everything Changed: UFC Japan 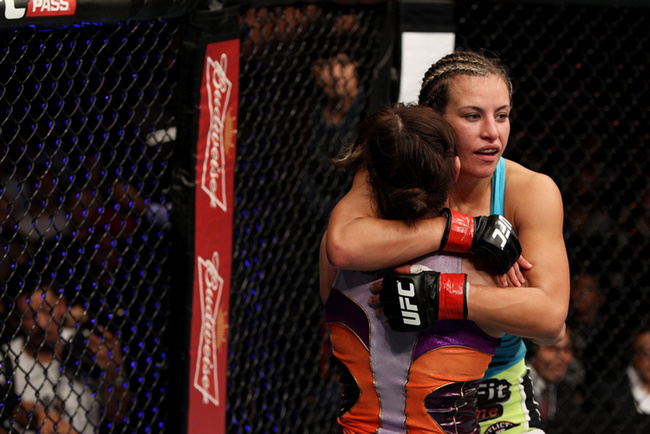 I’m sitting in my capsule at Narita’s 9 Hours Hotel nursing an hangover from last night’s post-fight drinking session. It looks like the Matrix and feels like Purgatory. The Japanese thoughtfully created a space that points you in the right direction, with impeccable minimalist design, toward blissful utility and penance in the pod. A space removed, from which I can look back on fight week and wonder what went wrong, and celebrate what went right.

It began with interviews, a full morning of them. And here is the fruit of that labor: Nakai’s Historic Fight (which she lost), Nelson’s Iron Chin (shattered), and Caceres’ Split Focus (on display). After the morning's interviews, I put in my headphones, popped Liquid Swords on repeat, and wandered around Shinjuku freestyling to myself and pretending I was a member of the Wu Tang Clan. 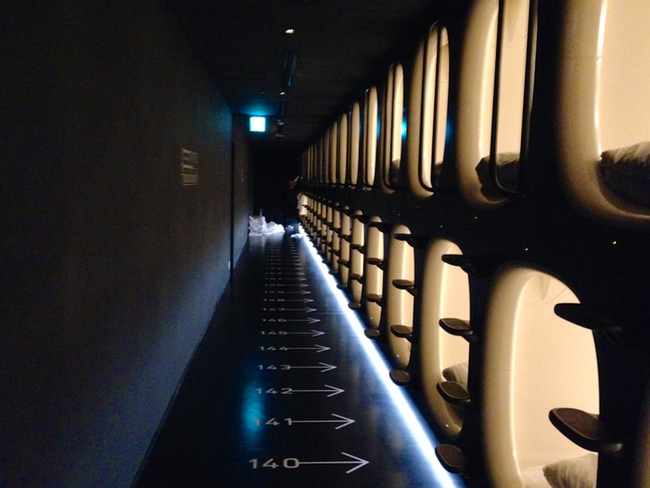 All the shops in Shinjuku close early, but I found a little fish shop in the alleys behind the train station. A couple girls offered me massages and a couple Nigerians offered the same plus drugs, but I shooed them away. This was “deep time,” when I’m listening to Meth’s rhymes in Shadowboxing portend some great event and realizing that the GZA’s words from almost two decades ago hint at hidden connections between the upcoming fights and the streets, between Japan’s polite society and the warrior code. Between the girls crossing the street in front of me as I bob my head to a beat they can’t hear, and imperial swordswings from the shogun’s decapitator.

Here is one of the rhymes I came up with:

Watch Caceres take care of this clown in the first round
With roundhouse kicks that emit no sound
Like a sapling trying to grow into a big tree
A garden full of veggies, herbals and goji
Nepali girl on his arm, deflecting harm, building cottages up into farms
Heavily fed steadily wed to the ideas rising up out of his head

Still bumping the 4th Chamber, I made it to my hideout in Jujo. In just a few short turns, complete silence. A small banzai tree with pink flowers, garbage meticulously separated, mini homes with secret details, and crackhead cats slinking back into the shadows. Insert my key, collapse, and sleep until the weigh-ins. 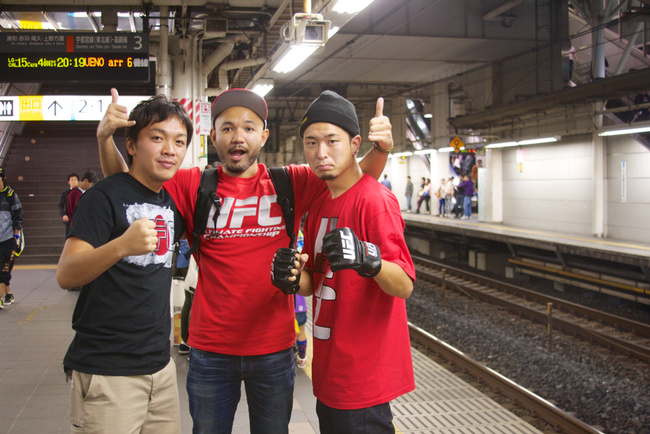 Nakai wanted to make an entrance at the weigh ins, dressed in blood red samurai armor and wielding a blade of some sort, but her coach and team immediately set upon her and frantically untied all of the straps so she wouldn’t hold anyone up. Instead, we saw her in a USA-themed bikini. Two pillars of ivory. My Lord, I thought to myself, Rin Nakai is a Pink Tank. It still makes me sigh with regret that she didn’t get to pose in that armor.

Roy Nelson’s wife, Jessy, sat next to me for a brief moment during the heavyweight weigh ins. She turned toward me and I saw she her face was tight with lines of worry. “Who do you want to win?” she asked. I said I can’t say, I love both of these guys, I just hope no one gets hurt. She made a slightly satisfied nod, then asked me to send her any photos I might have. “Please send them,” as if others had agreed to do so and failed to do so in the past. I fell in love with the Nelson family then, and sent the pics immediately. They were blurry, but you can still see Roy grinning.

The highlight of my trip, other than the fights, was supposed to be a rendezvous with my old Japanese flame Satomi the night of the weigh-ins. Back at the Hilton I told Ricky Manetta about her and he told me about Krav Maga. He showed me an innovation to a choke that left a lump of pain in my throat for days. At this moment, in the pod, I swallow experimentally to see if it still hurts. Gulp? It doesn’t.

I learned from Ricky that Krav Maga has its roots in the Jewish Resistance before and during WWII. It’s growing, changing, expanding and Ricky is a disciple and an instructor of the martial art. The techniques are not for sport, and the psychology is life changing for kids who get bullied, for girls who fast-walk home at night bundled up, and for thugs who had no purpose, but now find themselves serving as soldiers in an army of light.

The date with Satomi went exactly how I had not imagined it. Everything had changed, except for me. In this little pod, I hear people scurry about outside. When it gets quiet I’ll reflect on letting go of the past, on moving forward, on ridding my gut of unnecessary disappointment. 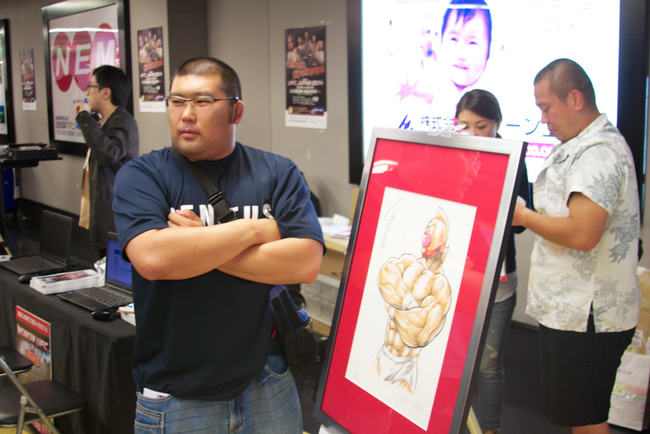 “Saitama Super Arena has such history,” Lilly told me. She is a one-woman tour de force keeping the world abreast of MMA in Asia. “So many great fights here, so many legends made.”

She and John Morgan move way from me because, as a features writer, I can sit back and be a fan. I yap and yap about the fights, but in the end there is empty space all around me. They have deadlines, play by plays, tweets, and multimedia to handle. My job is to remember. I am lucky to have just a few minutes with them, they school me on the scene with pretty much everything they say, some of it is not too swift to bite and I try not to get caught writing it down.

The first fight sets the tone for the entire card. Blanco tags Hooker like it’s a video game he can’t lose and Hooker eats every one, even taking the third round in some peoples’ eyes. The Japanese fans demonstrate very quickly that the rumors of JMMA’s demise are greatly exaggerated. They applaud sweeps, praise transitions, and sigh out loud at reversals during the Tanaka - Kang fight. And they just get better as the night goes on. I learn about the ground game by listening to the shrill cries of young girls and the respectful claps of twelve thousand spectators.

Katsunori in complete control, smiling and weaving in front of the banger Sam Sicilia. Caceres smiling into the camera, waking up late in the third, and losing to someone he coulda shoulda beat. The Walsh decision. 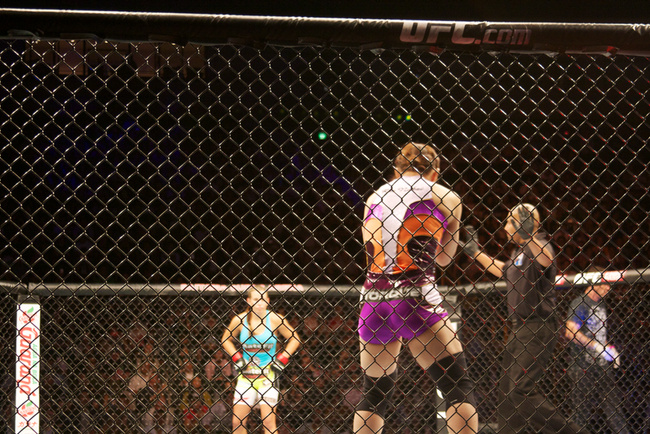 Watching Nakai - Tate was a letdown. Poor Nakai is so short she couldn’t connect with knees in the clinch, couldn’t get the leverage for her throws, couldn’t do much but exert every ounce of energy she had as Miesha ground out a victory. When Nakai walked past the press table she looked so exhausted and so dejected. I wanted to hug her, tell her it was all good, that she’d be back, that I thought the armor was dope, that I had a few wack rhymes I wrote for her, that I am her fan and now my emotions will rise and fall with her when she competes.

Akiyama. Pure Pimp. When Sexyama’s clan of gold plated black ninjas bow down with him as a group and walks out to Con Te Partiro, the man “impregnated every one in that arena with his aura”

Sexyama just impregnated everyone in that arena with his aura.

He then proceeds to kick Sadollah’s ass for three rounds. The crowd appreciates this veteran’s game, spiced like ham, and almost stands up. The night started out bad for their people, but during Akiyama’s performance, all is being redeemed. Even Gomi getting smashed changes nothing, we all knew it was going to happen. 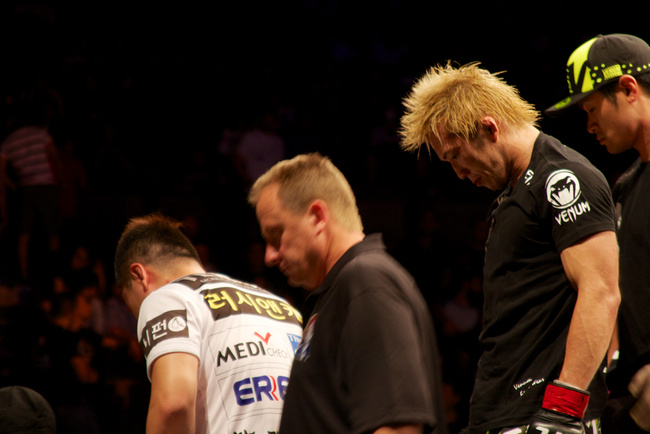 Mark Hunt and Roy Nelson. This was the first time in my life that I saw anything like this.  How to relate the adrenaline rush that washed over the entire arena as two body droppers, heartbeat stoppers, step into the ring and stalk in silence as someone announces the obvious? Leon Roberts said the next morning, over steak sandwiches (dude, I’m sorry!), that he heard the wind whistle with each blow these two men threw. Anyone of them would have killed you and me.

I wish I could tell Jessy the truth, that I wanted Roy to win so badly, that I felt it wasn't my place to say anything to her, that I didn’t want to jinx anything. That her question caught me off guard. That her fear for her husband’s welfare made me think of my own family to the extent that I sent a quick note to my sons, just saying I missed them.

As Mark celebrated, the crowd tried to come down off the high, and Roy trudged around the ring with his head down, furious at being dropped like that. While the result was being announced, i dreamt that Roy's little two year old son swore an oath of revenge, and when he was 18, destroyed some hapless soul and laid the heavyweight belt at his father’s feet.

I met some Kiwis on the subway back from Saitama to the Hilton. They relived the ride home in Brisbane, after the Hunt - Bigfoot fight. The whole car was silent they said, everyone lost in thought, staring into the ether, dreaming of how it could have gone, what they would have done, remembering every blow. In my pod as night falls outside, I relive the uppercut, the fall to the canvas, Jessy’s face, Roy’s frustrated stomping. Mark Hunt in the post fight conference, deadly, purposeful, businesslike. 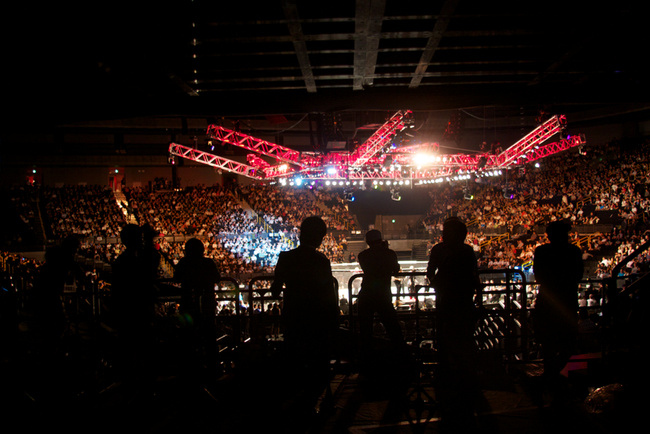 Ricky and his boys took me to a grope bar and we drank for free until eleven. Old white call girls sat in the corner talking to Arabs. Japanese girlies floating from one table to another in lascivious pairs, taking selfies with someone’s hand down their shirt. We left and hit the streets, dodging Nigerian gangsters and Turks in front of sizzling kebab stands. More painted packs of girls, flop-haired dudes, rock stars, skinny pants and glitter, inviting smiles showing crooked teeth.

We found the UFC staff milling out in front of the Havana Club. We joined them, and gathered around Urijah Faber as he roamed Rippongi in a futile search for an athletic booty. Drinks and more drinks. Lines got crossed. “No worries. It’s fight week. Crossing lines is the norm.” The sun comes up and there’s Joe Carr, professional even at 5am, eating a pizza and getting to the bottom of a staff member’s concerns. Everyone has already scattered, me to my Jujo hideout, everyone else to the portal that takes us from fight week to real life.

I miss my flight. So now I’m in this little pod, in a gray smock, left behind to float in purgatory one more night with Liquid Swords on repeat, the cries of UFC Japan echoing in my inner ear.