The Night Van Damme Was Nearly Thrown out of Lumpinee Stadium 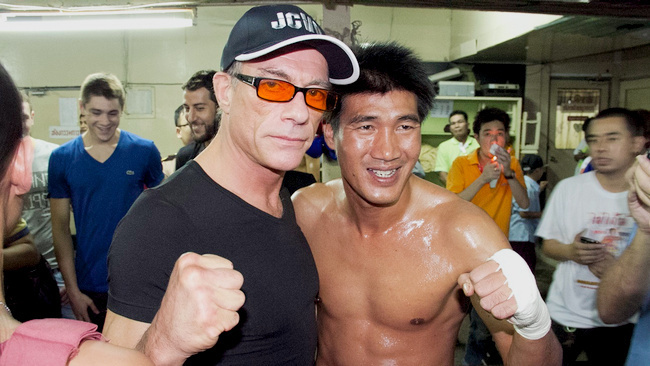 The old Lumpinee Stadium recently closed down after 58 years to be replaced by a brand new venue situated 30 kms further north. I was a regular back when I was living in Bangkok and have fond memories of the place but nothing can compare to the night Jean-Claude Van Damme nearly got thrown out of the ring.

It was one of the biggest shows of the year and the place was packed to see former Olympic gold medal winning boxer Somluck Khamsing make a comeback against Jomhod Kiatadisak, another ageing legend who was coming out of retirement.

The 12 fight card took place on December 7th, 2012 and was stacked with some of the biggest names in the sport like Singdam Kiatmoo9, Sangmanee Sor Tienpo, Petboonchu FA Group, Nong O Kaiyanghadaogym and Sam-A Kaiyanghadaogym but it was JCVD who stole the show.

JCVD was in town to promote an improbable sounding fight with Somluck and turned up at Lumpinee to support his prospective opponent for the big bout with Jomhod which had a cool three million Baht bet (approx 100,000 USD) between the two camps riding on it.

A stir went up among the Westerners in the audience when word went round that the Kickboxer star was in the house. I was sitting up on the ring taking photos at the time but as soon as the fight I was shooting finished I went backstage where I found him deep in conversation with Somluck.

The beauty of the old Lumpinee Stadium was that anyone could walk into the changing room area and take photos or talk to the fighters as they put their shorts on or got their hands wrapped and a huge scrum of tourists already surrounded JCVD and Somluck.

JCVD was talking and Somluck was just sitting there pretending to listen. I knew this because I’d driven up to his gym to interview him a few months earlier and he barely speaks a word of English so was just nodding politely, oblivious to whatever the middle-aged movie star was trying to tell him. 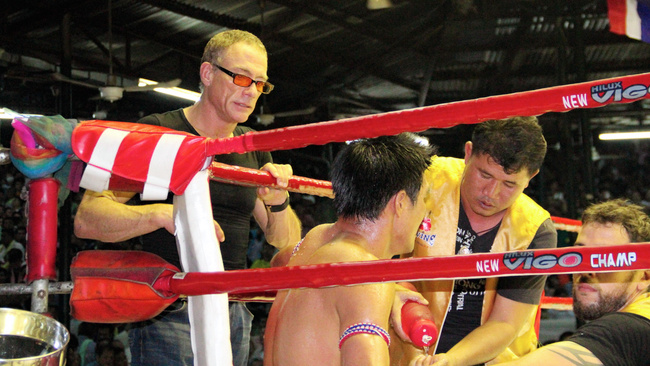 I got the attention of JCVD’s companion and asked him whether the fight with Somluck was actually happening. I was just expecting a quick answer but as soon as the Belgian actor heard I was a journalist he strode over and spent a good five minutes talking to me one on one.

Unfortunately I didn’t have my Dictaphone with me at the time but JCVD sounded extremely sincere and mildly apologetic as he assured me that he definitely wanted to do the fight with Somluck but had been forced to put it on hold because Expendables 2 was too good an opportunity to turn down.

An audience with arguably the greatest action movie star of all time wasn’t something I had been expecting that night and I walked off mildly star struck. The next time I saw JCVD he was walking out with Somluck’s entourage ahead of the big money fight with Jomhod but it wasn’t until the end of round three that things started to get really interesting.

Somluck had faded badly in the previous round and by this stage it was abundantly clear that he wouldn’t be going home with the three million Baht which was sitting in a neat stack by the side of the ring.

In a desperate and futile bid to inspire the exhausted 39 year old to mount an unlikely comeback, JCVD snatched a towel from a nearby Thai trainer who was too surprised to stop him, vaulted over the ropes and began frantically fanning Somluck with it.

In Muay Thai only two cornermen are allowed in the ring between rounds and I think Somluck could potentially have been disqualified for this infraction but even when the referee tried to usher him away JCVD refused to budge. 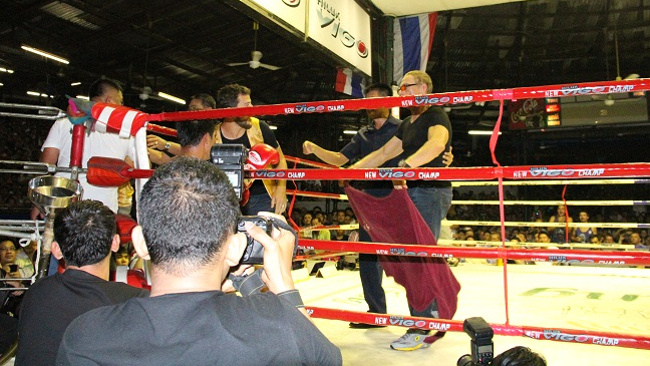 Eventually a compromise was reached whereby one of the two normal cornermen ducked out of the ring but there was still a commotion because JCVD wasn’t wearing the proper sponsored jacket/vest and someone had to strip it from the recently departed cornerman and put it on him in order to appease the officials.

While all this was going on the always vocal gamblers in the crowd were in uproar. It was difficult to tell whether they were amused or outraged by this breach of Muay Thai etiquette but an almighty noise echoed around the stadium.

Fortunately common sense prevailed as the cornermen contrived to shuffle under the ropes and shed clothing, ensuring that JCVD’s presence did not contravene Lumpinee regulations and saving the referee the unenviable task of having to physically remove the Bloodsport star from the ring.

Somluck was so exhausted that no amount of fanning was going to revive him sufficiently to go out and claim the knockdown, he probably needed to erode Jomhod’s lead on the scorecards but he did go on to win the money back and more in a rematch at Rajadamnern a few months later which had a six million side bet riding on it.

So JCVD’s antics had no real impact on the outcome of the fight but the sight of the famous movie star frantically fanning Somluck with a stolen towel while the referee pleaded with him to leave the ring and the Lumpinee crowd roared its disapproval is one that will linger long in the memory of everyone who was in the famous old stadium that night.