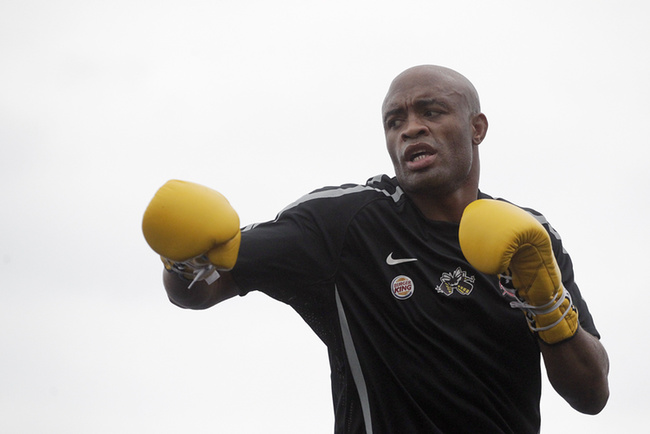 When we left our hero, Anderson Silva, he had flown over the top of Carlos Newton as his knee collided with the Canadian grappler's face. It was Silva's biggest, and only, notable win in PRIDE FC, and appears on highlight reels to this day.

There has been a great deal of discussion over why some fighters who couldn't make it in PRIDE became big deals in the UFC, and why many of the legends from PRIDE struggled once they came stateside. There's plenty of considerations from PED testing (which can often be more of a test in time management than a deterrent to PED use) to Phil Baroni's theory on jetlag being greater going one way around the world.

But in truth, if a fighter is going to be great, he'll find a way to be great when it is time. Athletic peak means a good deal, but belts aren't won on athleticism or genetic gifts alone. The fighting world is full of Kevin Randlemans and Stefan Struves who never combined their gifts with discipline, game planning and adaptability.

Anderson Silva looked, for quite some time, to be another. He was commonly referred to as the most technically skilled striker in the Chute Boxe camp, and I wouldn't doubt that for a moment. But sparring with other heavy-handed brawlers isn't going to prepare you to deal with the better grapplers out there. Everything the Chute Boxe camp showed in the early 2000's was geared at moving forward swinging and looking to fight off the takedown when it came.

You can see it in Silva's career up to his departure from PRIDE. He was walking forward, squatting low, throwing two punches and then trying to fight off the shot from his opponent. He wasn't a stocky block of muscle like Wanderlei Silva, and he often had a height advantage over his opponents. A height advantage is great in the kicking game, but every inch of height is another split second in the level-change. Too often when Silva moved forward striking, his opponents were able to get in on his hips and take him to the mat.

It was after his fight with Daiju Takase, where Silva was easily taken down as a result of this forward movement, that Silva almost gave up fighting for good. After leaving Chute Boxe and joining Brazilian Top Team with the Nogueira brothers, Silva started to have something of a career renaissance, becoming the Cage Rage middleweight champion.

He picked up a couple more losses, against Ryo Chonan who famously hit a kani-basami or 'crab pincer' takedown into a heel hook, and a disqualification for upkicking Yushin Okami from the guard, but generally Silva was looking a lot more like an all around fighter than an uncomfortable sprawl-and-brawler.

Silva's most memorable moment in Cage Rage came as he knocked out Tony Fryklund with a back elbow that he had learned from the Tony Jaa film, Ong Bak (the techniques of which we have looked at extensively in the past). On the strength of his performance, Silva was contracted by the UFC and thrown straight into a title eliminator against The Crippler, Chris Leben.

Leben was the UFC's wild man. Getting his contract off of the first season of The Ultimate Fighter, he was the guy in the house making a ruckus before the contestants were seemingly obligated to do so. But after his unsuccessful stint on TUF, Leben started to put together a streak of wins across the TUF Finale and each of the first four UFC Fight Night cards. A fan favorite for his heavy hands and granite jaw, he looked to be moving ever closer to a shot at Rich Franklin's middleweight title.

I remember the first time I read the accounts by Nat Fleischer and others of the heavyweight title fight between Jack Dempsey and Gene Tunney. I was astounded at what a revelation the simple act of circling out was in the 1920s. Tunney was getting away from Dempsey's vaunted power with some revolution in boxing science. Now it's the difference between a passable boxer, and an unconscious boxer. Yet in 2006, when Silva debuted in the UFC, the movement that he showed was new to MMA.

Notice how Silva gets Leben's feet moving, and Leben doesn't react at all before the jab slams into his head. Silva circles out and throws Leben past him.

More of the same can be seen here. Leben is always reaching, Silva only ever needs to stop retreating when he wants to hit Leben.

The Silva of PRIDE and the Silva of the UFC were polar opposites. No more wading forward and looking to land punches before the opponent had the chance to take him down. Now he was up on his toes, using the length of his strides and dancing around the octagon. You don't need to worry about sprawling on takedowns if you are never in range for them.

And that is one of the major differences between the cage and the ring. In the ring the corners are sharp, if you backpeddle for a moment as a striker, you're in a corner and you're getting taken down. The octagon's corners are so slight that it takes tremendous skill to actually cut off the cage.

An important principle of developing what Jimmy Wilde called “stopping power” is to realize that when you hit someone who is moving away from you, you lose a good deal of your force. If you hit someone who is stepping into you, the opponent amplifies whatever power you provided on your own. It's the difference between rear-ending someone as they slow down, and a head on collision.

The thing about a fighter with really excellent lateral movement is that when you spar or fight them it will feel unfair. It will feel as though they're cheating. They're never giving you the chance to hit them, they're only getting close enough to touch when they're hitting you. It feels like a great injustice is being done and it spurs you on to chase after them with more tenacity. And the harder you push in, the harder you make those collision when they stop and pop a ram-rod straight in your grill.

Silva danced, and lanced with his stiff right jab, as Leben chased wildly. Silva's distance was beautifully measured, always being just close enough to land a perfect straight blow, but too far for a Leben swing. Each charge was side stepped beautifully by Silva, and as Leben paused after another failed charge, Silva snapped a left high kick up into Leben's head. It wasn't a Cro Cop-esque swing, just a quick snapping Taekwondo kick, but it rattled Leben up. And The Crippler only knew how to do one thing when he got hurt, push in hard.

Leben moved in and Silva met him with a good straight. Each punch Leben threw was a swing with his head in one place, each one Silva threw was a piston-like straight with his head gently swaying off of the centre line each time. The aforementioned Gene Tunney put it best when he declared in A Man Must Fight that any so called mechanical fighter or technician can happily slug it out with a big hitter, because he understands the value of the straight blows, and of actually connecting versus loading up and failing.

Leben crashed to the floor but was able to get up. Another kick came in, and then Silva's hands were around Leben's collar and The Crippler found himself in that most terrifying of positions, Anderson Silva's double collar tie. A knee came in and Leben, who had never been knocked out and was thought by some to be "unknockoutable" crashed to the mat, face down.

Was it superhuman punching power that let Silva do this? No. In fact, Leben did most of the work and didn't even realise it.

In the martial arts, there is often talk of taking the opponent's strength and using it against him, but normally this is illustrated in books and films with a woman performing a judo throw on a male aggressor. But I contend that there is no better example of using and opponent's strength against him than drawing him onto your blows and having him double the force for you.

MMA fighters have been attempting to train their boxing for years, but the great secret is that boxing isn't the act of hitting someone with your fists—that's just punching. Boxing is the creation of opportunities to do this, and the art of denying your opponent the same. Lateral movement and straight hitting inside of looped punches isn't new, Tunney was doing it in the 1920s, and Joe Gans before him, and Jim Corbett before both. But for MMA, this was a watershed.

We can talk about “different levels” of striking, as if it is some kind of attribute in a role playing game, but that only really holds up in internet arguments. The truth is that Silva understood, and still understands, that you're only as good as the punches that you land. He also knew that the man who leads is at an inherent disadvantage because he has displayed his intentions and opened his guard.

For the next few years, Silva was going to cause havoc in the division with this bait and counter method. But when opponents stopped falling for it he started to look a little less untouchable. Though that's a story for next time on The Path of Silva.

Come back Monday for the next installment The Path of Nick Diaz.