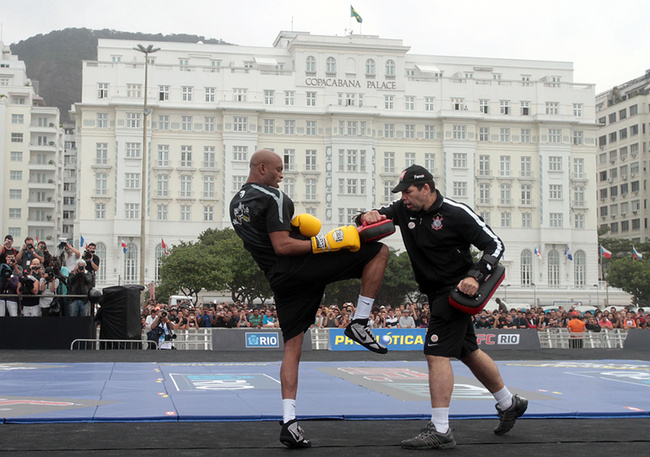 PRIDE didn't have a one hundred and eighty-five pound weight class when Carlos Newton and Anderson Silva stepped into the ring together. This was unfortunate because as Bas Rutten and Stephen Quadros speculated, Newton and Silva could well have made the perfect fight to debut a belt. But this was March 2003 and nobody gave a damn.

Fedor Emelianenko and Antonio Rodrigo Nogueira were deciding the best heavyweight in the world in the main event, and Quinton Jackson, Kevin Randleman, and Kazushi Sakuraba were providing excitement on the same card in the people's favourite division, 205lbs. Moreover, Carlos Newton had just come from the UFC where he had been a champion at 170lbs, and Anderson Silva had only recently won the Shooto 168lbs title. For some reason, nowhere was offering belts at their most natural weight.

Carlos Newton was fast accumulating a reputation as a submission machine both on the Japanese circuit and in the U.S. With no particular allegiance to one style, method, or teacher, Newton came to be nicknamed The Ronin (a ronin being a masterless samurai). After an unremarkable beginning to his MMA career, going 0-2, Newton found himself in a fight against the great former Shooto champion, Erik Paulson. Newton surprised everyone in the know by effortlessly taking down and armbarring the MMA pioneer in under a minute.

The highlight of Newton's career came as he stepped in against Pat Miletich for the UFC welterweight strap. Miletich was the prototype of the modern MMA fighter. A great striker and grappler by the standards of the day, he got the better of Newton on the feet and stalled Newton out in his guard on the ground. In round three, Newton moved Miletich to the fence, and Miletich couldn't resist the chance to leave his guard and get to his feet.

In that instant, Newton jumped for Miletich's back, missing everything but his head. It turned out that this was all that Newton needed as he grimaced and strained to pick up that rarest of submissions, the bulldog choke. As they strapped the belt on Newton, the ex-champion embraced him and remarked that he had no idea how Newton had done it.

After losing the title to the soon-to-be-great Matt Hughes, Newton focused on his career in Japan. Meeting the Chute Boxe pioneer, Jose Landi-Jons, Newton found himself in the fight of his life as the two exchanged blows on the feet. But once Newton got 'Pele' to the ground, he hit the armbar of the year.

For Anderson Silva's part, he was still the Chute Boxe understudy. Even then considered the most technical striker in the camp, he just couldn't fight off the takedowns like Wanderlei Silva. Wanderei Silva's move forward, swing, and sprawl required a physicality that the young, gangly Anderson Silva just didn't have. That being said, Silva's own Jiu Jitsu game had carried him to numerous wins, and had allowed him to become the first man to ever beat the pound-for-pound greatest fighter in the world at that point, Hayato Sakurai.

As Silva and Newton came out of their corners on fight night, Silva looked to awkwardly walk Newton down. The low, wide stance, and the awkward one-two punching were characteristic of early Silva as he looked to land telling blows but still be in position to deal with the takedowns that troubled him so much.

Newton came out, dipped in, and as Silva's hands went out to push Newton away, Newton swung in a neat left hook. Moments later Newton shot in for real, and Silva was on his back. Newton passed guard and transitioned all over Silva until Silva finally replaced his guard and locked in a figure four.

Silva couldn't sweep or stand up from underneath opponents all that well, so he'd lock in the body triangle and hold out for the restart on the feet. Silva continued to stiff arm Newton's face away and punch up from his back, another early Chute Boxe tactic (which you can see in full effect in the bout between Wanderlei Silva and Daijiro Matsui and) which dropped off when fighters realized it didn't do much.

Silva then looked to hit the unusual sweep that he had used against Roan Cordeiro in Brazil's Mecca fighting promotion.

From his figure four guard (with his right foot locked in behind his left knee), Silva broke Newton's posture down and attempted to use his left hand to insert his left foot in as a butterfly hook. It was a strained effort to do so.

But Newton was far removed from Roan Cordeiro and there was little hope of catching him out with a sweep that looked more like a self inflicted toe hold. In spite of Silva mounting little offence, he did manage to replicate exactly what Militech had done—shutting Newton down completely in his guard.

The referee broke the two fighters and returned them to the feet, giving Silva a yellow card (and a purse deduction) in the process.  Now Silva went to work. Newton had slowed a little and Silva wasn't going to be caught out by any surprise shots. Edging towards Newton, Silva started rattling the Canadian with straight punches, and pushing Newton off each time he felt Newton was moving into range to shoot.

As Silva heeled Newton's face away with the palm of his hand and looked to punch, Newton ducked his head low and backed up. But he'd shown his hand as he immediately looked to duck in on Silva again. Silva leapt up and met Newton with a flying knee. The force of the collision sent Silva over the top of Newton, and Newton was left sitting on the mat, reeling as if he had sat up in bed with worry, but couldn't remember what he was supposed to be worried about. Silva turned to face him and four unanswered straight shots to the jaw later, the referee leapt in to end the fight.

It was not the Anderson Silva who struck fear into the hearts of the meanest wrestlers and hardest punchers. In fact, this fight perfectly demonstrates early Anderson Silva, and just why Chute Boxe was not where he needed to be in order to become the greatest fighter that he could. That's not a knock on the camp or the coaches, but some fighters are suited to certain styles and coaches more than others. The aggressive brawl-then-sprawl style was not one which Anderson Silva was suited to, and it often ended up with him on his back where the best case scenario was the fight being restarted on the feet and him having 10% of his purse deducted for stalling. Silva needed to take a little bit of Carlos Newton's ronin persona—he needed to go out, be set free, and grow on his own.

It wouldn't change for a little while yet, Silva had a few more ups and downs to get through, but Silva's last PRIDE knockout remains in the highlight reels, like an early album in the discography of one of your favorite bands. He might watch it back and think “what on earth was I doing?” but the finish was certainly a gem.

Over the next two weeks we will be following both The Path of Silva, and The Path of Diaz. Join us each day to remember the best performances, the key losses, and the strategies and techniques of both men.

Artem Levin Is Coming to America