The Path of Anderson Silva: The Cracks Begin to Show 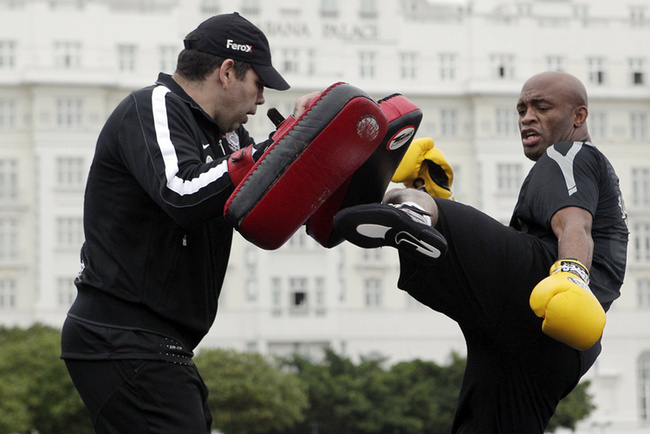 When last we left The Spider, he had just sent an iron-jawed brawler to the mat in under two minutes, and secured himself an immediate shot at the UFC title. Unless you've been living under a rock for a while, you know that the reason Silva is such a big deal is because of the incredible streak of wins he put together inside the UFC once he had this belt.

To give the briefest of run downs, Silva stood toe-to-toe with Franklin, slapping down Franklin's punches and rushing into the double collar tie each time. From here he looked to land knees to the body and face of Franklin, making quick work of the champion and securing the middleweight title. After crushing Nate Marquardt and submitting Travis Lutter, Silva was signed into a rematch with Franklin.

The second time around, Silva looked to secure the double collar tie again. Franklin defended it better this time, but Silva used excellent trips, flurries and off-balancing techniques to force Franklin out of position and slap on the double collar tie anyway. There were more knees to the face, and another knockout for the middleweight champion.

After submitting PRIDE champion, Dan Henderson, and taking a squash match at 205lbs, Silva was slated to defend his title against seeming no-hoper, Patrick Cote. And this is where we will rejoin the great champion. Those of you who have seen the fight will be questioning why—it was pretty dire.

The story has always been that Anderson Silva seemingly had no weaknesses except wrestling going into his first match with Chris Weidman, where he lost the title. But while the untouchable champ makes for a great narrative, the holes in Silva's stand up game were on display much earlier, against the most unimposing of opponents. Not because of who he was fighting, but because of how they were fighting... or not fighting, as the case may be.

Patrick Cote is not a name that quickens the pulse of many fans. He's a solid journeyman, with a great chin and a great right hand, but his left hand might as well not exist. He'll throw the right, then step with the right again, or vice versa, and that constitutes the extent of his combination work in most fights. It looked as though it might be an easy night for Silva, particularly as Silva shrugged off Cote's early offense and countered with hard shots of his own. A lovely high kick as Cote came in, and a jumping knee to the face later in the first round quickly confirmed that Cote's chin was as good as advertised.

But then something peculiar happened... Patrick Cote stopped leading. He didn't seem scared, or timid, he just stopped attacking. It was as if he was saying, “Your point. Okay, now it's your serve”. Silva seemed baffled, and when the leads were not forthcoming for a good minute or so, he was flat out bamboozled. Even Cote's coach seemed bemused as he repeated to Cote between rounds that he should “stay busy”, yet Cote did anything but that. So how did not fighting trouble Silva so much?

This sort of stuff took up an alarming amount of the fight.

You see, Silva excels in the counter game. He likes letting an opponent fire first and show their hand. Bruce Lee put it best, the advantage is always with the man who is fighting on the counter, because he doesn't open up at all until he already knows what's happening. Against Chris Leben, Silva had danced around Leben, drawn him forward, and hammered hard counter straights inside of Leben's looping swings.

The problem is that once you know all the holes that are created when a fighter throws out punches, you can't unlearn them. Silva absolutely loathes leading with his hands. And who can blame him? He'd been making easy money by taking advantage of men doing the same. Furthermore, all of the important takedowns conceded by Silva in previous fights—against Kato, Newton, Takase—came as he was stepping forward with punches. As soon as his arms left his sides, his hips were open and he was a sitting duck for the takedowns which had plagued his early career.

So what did Silva do? He went to his Muay Thai and Taekwondo. He led almost exclusively with long snap kicks and kicks to Cote's legs. The low kicks weren't even well hidden, he simply stepped in and punted Cote's legs, knowing that he could be far enough away if Cote started punching back.

Very, very occasionally, Silva would use a trick play to set up a punch, but it wasn't the sort of stuff he could go to very often. For instance the lovely ginga into a stepping straight in the opening round.

It was a lot of movement for a not-so-meaningful connection, but a neat one-off trick.

The ginga (literally “swing”) is the basic movement of capoeira, a Brazilian martial art. One of the peculiar things about capoeira is that even the scholars on its history are pretty unsure about how it developed. Some say it developed in the way it did among Brazil's slave community to hide the martial art as a traditional dance, but in the eighteenth and nineteenth century traditional dances were being stamped out with equal enthusiasm.

The earliest accounts of witnessing capoeira seem to suggest a contest of diving head butts to the chest in an attempt to knock the opponent over. The evasions necessary would go some way to explaining the constant movement of the ginga rather than a static stance as exists in most fighting methods.

But, for the most part, Silva was reduced to kicking almost exclusively on the lead. To connect good low kicks at a high percentage, most great kickboxers will set them up. Many elite Nak Muay will work on cutting down the telegraph. Silva did neither, he stepped hard into his kicks and provided no distraction. Even Cote, who had only taken down two opponents in the UFC, was able to grab a hold of the single leg as a result.

Props to Silva for attempting what looks like a sacrifice back kick though!

Patrick Cote, unfortunately, injured his knee by bouncing around on one leg and the fight had to be called off. But the short, uneventful bout had foreshadowed a couple of issues that would cost Silva his title later on when he fought Chris Weidman.

Firstly, Silva's low kicking game—though powerful—was hazardous. A hard low kick to the thigh is a great way to give up an easy takedown attempt. He was giving the opponent a free pass to his leg and hips when he had worked so hard over the past few years on remaining at distance to minimize the wrestling game.

It was because of this that Silva began to develop the side kick to the knee and the round kick to the calf which we saw him use to full effect against Demian Maia when the latter also refused to lead. These kicks are now a staple of the distance fighting games of Jon Jones, Benson Henderson and Conor McGregor. It was when Silva got desperate to land some telling shots against Chris Weidman in their first and second bouts that he reverted to stepping in with hard low kicks without a set up.

But all of this was symptomatic of a bigger problem. Silva wouldn't lead with anything except kicks and he didn't have a way to draw the fight back onto the counter. Without going too far down the Conor McGregor hype rabit hole, what I have always admired about him is that he likes to fight on the counter, but he forces the opponent to throw back at him. With wheel kicks, simple boxing set ups and all manner of attacks. If you watch Roberto Duran or any other truly, truly elite boxer, they will throw something in their opponent's face, and as their opponent returns they'll already be in position to counter.

Silva, for all the talk of being the best striker to ever grace mixed martial arts, was almost a pure counter puncher. That's not wrong, that doesn't mean he wasn't the absolute best at what he did and borderline superhumanly good, that's just a considerable shortcoming in certain fights. They used to say of Jack Johnson that when he was forced to lead he wasn't half the fighter he could be on the counter—and the exact same is true of Silva.

When his opponent refuses to lead, Silva is reduced to playing for the crowd. Attempting to upset world-class fighters into an ill-advised lead. And to be fair, it's worked a good amount. But against a truly disciplined, unemotional fighter, who will keep readjusting the range and throwing out non-committal punches it accomplishes little.

After this fight and another disappointing one against Thales Leites, Silva went back up to 205lbs to take on the former light heavyweight champion, Forrest Griffin and crushed him easily as Griffin led repeatedly and clumsily. It was the perfect fight to rebuild Silva's unbeatable aura. But with lackluster performances against Leites and Demian Maia, when they in turn refused to lead, a sizeable hole had appeared in the game of the greatest fighter in the world. It took a long time before someone came along with the skills, the smarts, and the discipline to exploit it, but that's a story for another time.

Check out more of our Path series: