The Path of Conor McGregor: Birth of The Notorious 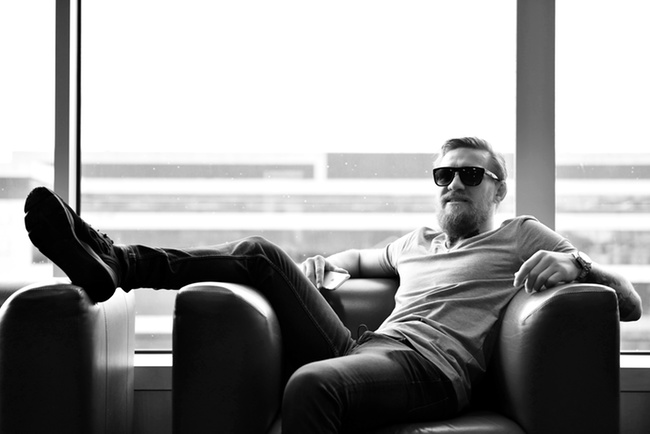 Looking at the top-knot sporting, waistcoat-wearing superstar who heads the bill at UFC 189, it's hard to remember the clean shaven, bald headed Conor McGregor who found his feet in Cage Warriors. And watching the kicks and jumps which form much of McGregor's game today, it seems strange to go back and see the fighter who relied entirely on throwing out his arms, shouting abuse at the opponent, and then finding a counter with his boxing as they led.

But that is part of the McGregor allure, how rapidly he has developed from a bare bones game which relied heavily on quality counter boxing, into an all around martial artist, leading the charge in the evolution of the MMA kicking game.

By mid 2011, McGregor's MMA record stood at a decent 8-2, with all eight of the wins coming by way of knockout or TKO. But the two losses were well known. In June of 2008, McGregor had been knee barred by Artemij Sitenkov (a guy who pulled guard on him in the first ten seconds), and in 2010, after lighting up Joe Duffy on the feet, he was easily taken down and submitted by arm triangle. There wasn't so much a question mark over McGregor's grappling as folks flat out dismissing it. He was an entertaining banger, but against the better fighters he would probably never have the ground chops to survive.

But fighting five times in 2011, McGregor took his record from 5-2 to 9-2, stopping every man who got in the ring with him. After a successful Cage Warriors debut—in Jordan of all places—McGregor decided to cut to featherweight. In London, McGregor opened up like a house on fire against an overmatched Steve O'Keefe. O'Keefe covered up for the first ten seconds, before getting McGregor to the fence in a clinch. O'Keefe came dangerously close to taking McGregor's back, and to getting an arm triangle position from standing, and it seemed like the Joseph Duffy fight all over again.

But McGregor battled back, and as O'Keefe dived for McGregor's hips, the young Notorious brought in the Travis Browne elbow strikes. O'Keefe slid down McGregor's leg like an inebriated pole dancer and the fight was called for McGregor.

The heavy handed gent had run amuck in Kentish Town, and looked damn good at featherweight while doing it. Cage Warriors was not a huge organization, nor was it promoting particularly good fighters, but it had found a star in McGregor.  Four months later, in June 2012, Conor McGregor fought for his first belt—the Cage Warriors Featherweight Title.

As McGregor and Dave Hill left their corners, McGregor immediately drove across the ring. He threw his arms out to invite a lead and, when Hill hesitated for an instant, McGregor had already planted a left straight on Hill's snout. Hill dived for a takedown and McGregor sprawled. McGregor looked for a guillotine and pulled guard, but lost the guillotine en route. It seemed as though McGregor had thrown himself into the only spot he had to avoid.

McGregor surprised though, turning to his side and performing a technical stand up which had Hill chasing him to the fence to keep a hold. Something you'll hear from few adept guard closed players is the idea of using of the inner thighs against the opponent to turn the hips, rather than posting a foot on the floor or hip in the more classical shrimping method. McGregor does so nicely to set up his stand up.

From that moment forward, the fight devolved into Hill taking a beating on the feet, and McGregor fighting off the takedowns. As has become the theme, McGregor's best strikes rarely came on offense, but rather when Hill, the obviously less skilled striker, chose to lead.

McGregor looking for his favorite back stepping left straight, then landing a nice counter right hook.

As Hill dived desperately for a takedown near the end of the first round, McGregor showed a little savvy with a few borderline elbow strikes, then a blatant fence grab to perform a turnover to mount. Jose Aldo-esque in his fence grabbing. McGregor took the back and locked in a rear naked choke just as the round ended. Hill had survived the early going.

The referee tells McGregor off, but does nothing about the incredibly dominant position he has just gained through a flagrant foul.

The respite was brief though. Hill immediately dived on a takedown at the beginning of the second round and wound up on the bottom. After three minutes of getting beaten on, Hill gave his back and McGregor locked in the choke again—on this occasion with time on the clock to force the tap. McGregor had taken on a dangerous grappler, fought his way back from the bottom, and picked up the first submission win of his career.

The ring announcer emphatically declared McGregor to be Ireland's first MMA world champion—though that phrase only means as much as you want it to. Hill hadn't fought in Cage Warriors even once before, and was on a 1-2 skid. But the match served its purpose and it tested McGregor's wrestling as much as an English fighter could.

It was the beginning of what Mike Goldberg would call a “meteoric rise” for McGregor. Six months later, McGregor was back in the cage and fighting for the Cage Warriors lightweight title as well. A year after he beat Dave Hill, McGregor fought his UFC debut. But that is a story for another time.

Stay tuned to Fightland as we examine the interweaving paths of Jose Aldo and Conor McGregor up to their UFC 189 meeting.

Read the first part of The Path of Jose Aldo:

The Path of José Aldo: Fed to the Lions